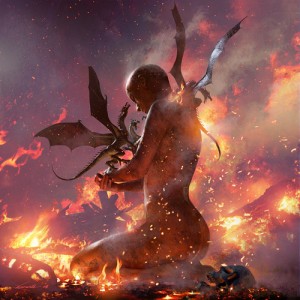 Today’s character profile comes from Katie Durham, a special effects makeup artist from Louisville, KY.  She has a “Trivial Pursuit” brain knowing random facts about a lot of different subjects. Follow her on Twitter and Facebook.

I started watching The Game of Thrones after the first season had ended and the second one was about to begin this year. After watching the first season I decided that I should read the books which totally consumed me. The series is captivating to watch and is always brimming with new things. I feel like it also is well adapted from the books to the screen. HBO’s visual effects are amazing and often I am very excited to see what they do with the characters in the series. (art to the right by Michael Kormarck)

When we first meet Daenerys or “Dany” as some call her she seems like a timid girl who is bullied by her brother.  After being forced into an arranged marriage to Khal Drogo, the ruler of a Khalisar, Daenerys becomes the Khaleesi. Since she was basically sold to Khal Drogo, their intimacy was almost uncomfortable to watch at first, her seeming so innocent and him seeming so forceful. Eventually she learns from her hand maiden how to pleasure a man and their passion for one another is consuming. Daenerys is given almost equal ruling rights by Drogo. After discovering that she is pregnant with his son and heir, Drogo is willing to do anything for her. 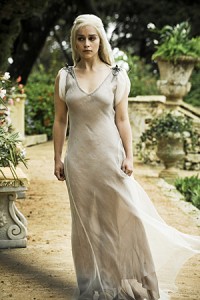 As a wedding gift she was given petrified dragon’s eggs. She is drawn to them immediately for their beauty and the heat she feels coming from them… Is this the madness that had consumed her father?  When watching the show in the beginning, she seems determined to hurt herself always taking baths that are too hot or sticking her hand into fire. It isn’t until later that we learn not only are the Targaryens the blood of the dragon they are flame resistant, so the legend goes. So perhaps she isn’t mad like her father in thinking that the eggs are emitting their own warmth. Or is she?

Daenerys still trying to be dutiful to Viserys offers him some Dothraki clothes and tries to be hospitable. He is still terrible to her until Khal Drogo decides to give him “his crown of gold” Literally. When Viserys died, I know that I cheered because he was insufferable with his power hungry ways and cruelty. Daenerys realizes that he could have never the heir to the throne of Westeros, since the blood of the dragon cannot be harmed by fire. When Drogo dies after being the victim of a vengeful Magii, Daenerys walks right into his funeral pyre with her three dragon eggs. When she walked into that fire, I thought she was a goner. Stricken by her grief and wanting to be with her husband and child, it is easy to see that with her fascination with fire dying by it would seem plausible. She not only is unscathed by the fire, she comes out with three baby dragons. Now she is Daenerys Stormborn, “Mother of Dragons” and her determination to rule as a Queen is born again like the phoenix rising from the ashes. 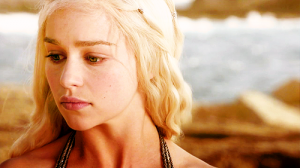 After Drogo dies Daenerys refuses to go where the Dothraki take the wives of dead Khals as she is also the rightful ruler of Westeros. One the members of her court are Jorah Mormont, the son of the leader of the Night’s Watch who is with the Dothraki when she arrives. Being from Westeros Jorah is her protector and interpreter in the beginning of their relationship eventually; He becomes her knight and closest advisor. As a person banished from Westeros herself I think she was a little more willing to just accept him being there than to look into why he was there in the first place. There is a dark side of him that Daenerys doesn’t know about. His armor has been tarnished and was banished from Westeros for betraying the Baratheons in favor of the Targaryens. In order to redeem himself he is a spy with Robert Baratheon often telling Varys where and when they are in different parts of Pentos.  After one assassination attempt by a merchant, she is on edge about being harmed and paranoid with the thought of some unknown person calling for her death.

With her Khalisar disbanded and only a few members of the group left behind including Drogo’s sworn blood riders. She decides to head across the Red Waste to get away from those who might harm her. She had already survived assassination attempts and walking through flames, what would a little desert do to her? Not all of the group as flame retardant as her and many of them die in the Red Waste. Was this the right decision to have been made? You can see that there is an inner struggle Daenerys faces as she tries to make decisions to protect people and be kind to them. Kindness only got her husband killed because it was her that brought the Magii into their Khalisar in the first place. What type of ruler will Daenerys be? One that wants to reclaim her rightful throne with fire and blood but is she the type of person that would do it under any means necessary like those incestuous Lannisters? Time will only tell. 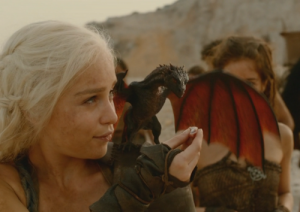 By crossing the Red Waste she was not only going in the wrong direction, she was heading into a place that will not only covet her dragons, they will try to steal them away from her. When they are received by the leaders of Qarth “the thirteen” as they are called try to turn her away. She shows the leaders her temper and fiery nature trying to force their hand into allowing her admittance. Xaro Xhoan Daxos thinking he can tempt her with riches vouches for her so that she can be admitted with her Khalisar into the city to stay in his home. Although, he should have realized that she didn’t want riches, she is a woman that wants power.  Jorah announces his unrequited feelings of love for Daenerys that puts her in a confusing and uncomfortable position being wooed by Xaro Xhoan Daxos and learning about Jorah’s feelings of love for her. Can she love someone who is her sworn sword? I think she is torn not really knowing what love is and knowing that he is so dedicated and has protected her from many perils, even though her feelings for him seem plutonic and he is more of a father figure to her could she love him? Later she meets the warlock Pyat Pree, who steals the dragons and forces her to come into the House of the Undying. She goes in and learns that she will be betrayed three times: Once for love, Once for gold and Once for blood. Without being able to find the answer of who will betray her, she finds her dragons. The dragons set the House of the Undying aflame and Daenerys walks out of another burning situation.

After returning to Xaro Xhoan Daxos’ Villa and finding him in bed with one of her handmaidens, the one who knows so much about pleasuring men. Her fury rages like the fire within her and she locks them both in his safe. Even in the uncomfortable position with Jorah declaring his love for her she still feels as though he is trustworthy and dutiful to her. So she takes him and her blood riders away from Qarth.  The road to Westeros is long and treacherous for:  Khaleesi Daenerys Stormborn of the house of Targaryen, the mother of dragons, walker of flames, the rightful Queen of Westeros. 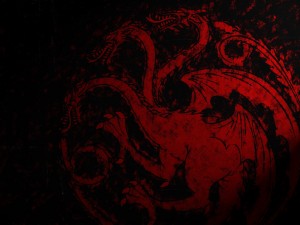 There are a few burning questions left unanswered about Daenerys’ journey. Who will betray her? There aren’t many people she has close anymore, does that mean that those closest to her are going to betray her or are there new people she will come across that will betray her? Who can you trust when you know that you are to be betrayed? Unfortunately we are left to speculate who will betray her. Though she will meet people in the future that will make her wary of others and some who want to see her destroyed. There are things she needs in order to get to Westeros: A Boat and an army.

How do her odds fair in the Game of Thrones? No one else has dragons so I am placing her pretty high on the list of potential rulers. Especially when she comes from a House whose motto is: Fire and Blood. She has shown that in a short time a girl can turn into a fierce woman, willing to die to protect what is hers. Her strength unlike Cersei Lannister, is from within not from envy or greed. Her birthright is the throne. I only hope that she can live to rule there.