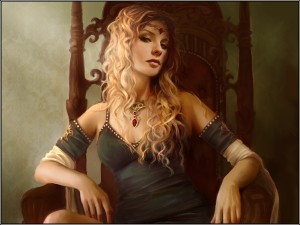 One thing that never fails to impress me about HBO’s Game of Thrones is how well George R. R. Martin’s characters have been translated onto the screen through both accomplished acting and smart screenwriting. As much as we are glued to the screen, rooting for Jon Snow, Daenerys, Tyrion, and other point-of-view characters with an ounce of morality, one can’t help but love to hate some of the less savory figures. As Season 2 progresses, we particularly get some excellent characterization from the bad guys – for instance, as sick as Joffrey’s treatment of his “gifts” in the last episode was, it really showed us Joffrey isn’t just a petulant child glutting himself on power, but truly a twisted boy-king getting increasingly out of control. Even characters like Bronn, rather likeable in his offhand, cynical way, make us think twice – after all, a man who would kill a baby for the right price? This is definitely no black-and-white world, and its people no more so. In fact, it is quite enjoyable to take a closer look at the darker characters, for they are usually quite complex. Take a certain Cersei Lannister for example: the golden-haired twin lion to Jaime portrayed in all her greed, cruelty, bitterness and fierce loyalty by Lena Headey.

Although quite a multi-dimensional character, Cersei is probably one we’d be happy to see fall from her pedestal, soon and hard. Embittered by many years of loveless marriage to Robert, thwarted ambitions and the restrictions of her gender, she is reckless and uncompromising. Upon securing her place as Queen Regent, she is still far from satisfied, growing bolder and ever more sure of her “method” of playing the game. 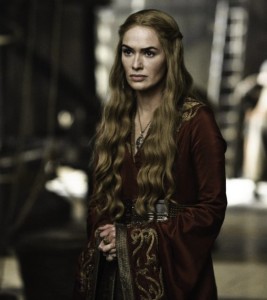 It would be pretty easy from just looking at those characteristics, to firmly decide, “Yep – she’s a baddie alright.” But there is one aspect to her character which is quite complex and troubling, and that makes us pause: her (rather twisted) sense of loyalty. In itself we all want to consider loyalty a positive trait, and it is quite ingenious for George R. R. Martin to force us to confront this tendency of our by presenting this positive attribute within such a negative character. Take Cersei’s incestuous tendencies for instance: a big no-no factor for sure, but in light of her Lannister loyalty, it is difficult to understand. Is it a genuine sort of affection, borne out of some troubling mixture of sibling love and her habit of turning to family protection? Is it a warped sense of maintaining their lineage? Martin shows us at certain moments that she is capable of affection, but if at the expense of committing incest, we’re back to where we started. Not to mention, if loyalty and love towards the memory of her mother finds its expression through an irrational hatred of her other brother Tyrion, who can hardly be blamed for his own birth, then we have a character who sees no room in life for compromise. It is all or nothing with Cersei, which the series’ complicated world of politics simply does not allow. Ultimately, it is this unyielding, inflexible nature of hers that makes her a danger to herself and the realm.”Power is power,” she tells Littlefinger in Season 2, and this is a phrase that gives us a clear window into this character. Cersei does not understand the way characters like Littlefinger, Tyrion and Varys approach the acquisition and maintenance of power. In this way she is very much like her soldier brother Jaime. Just as Jaime has always depended on his superior physical combat skills to protect and further himself, as does Cersei use power: a brute force, as simple as either having a sword in your hand or having many men on your side with swords in their hands. Bold to the point of being reckless, she often chastises Robert for not using more forceful, harsh measures: “I should wear the armor, and you the gown.” Subtlety is not really in her vocabulary – perhaps she really is that frightening of a combination of attributes, or perhaps she is overcompensating for having been manipulated or sidelined by her father, brothers and King.

In this Season, we can see she is already finding that some things are unraveling fast, despite the power she has as Queen regent. There are notable moments between her and Joffrey that betray tension – indeed, Lena Headey’s portrayals are quite nuanced these scenes, where we can tell she is hovering between giving Joffrey a good slap and not undermining his authority in public. Even she is shocked by her son’s ruthlessness and ignorance, in moments for instance like Ned Stark’s execution. Paradoxically, she is unnerved by Joffrey’s petulant (rather than calculated, I suppose) cruelty, whereas many other characters would probably say the same thing about her actions. Is she slowly realizing she can see the worst of herself in Joffrey, or will she encourage him, as he is her link to power? Readers of the novels know how things turn out, but at the moment the TV series has us on tenterhooks about this cruel character who nonetheless shows moments of human failings and frustrations.