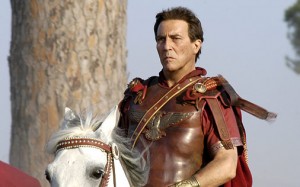 We can now confirm that casting for the highly anticipated role of Mance Rayder has finally been released. HBOWatch would like to send out a nice, big CONGRATULATIONS to Ciarán Hinds for being selected to portray the infamous King Beyond the Wall. There has been a lot of speculation regarding who will play the the Wildling leader, and we can now finally put a face to the name.

Hinds is probably best known to HBO fans for his amazing role in the series Rome as Julius Caesar.  Let’s hope he displays the same acting prowess he has in that show for Game of Thrones!

Brief Bio on Mance Rayder via A Wiki of Ice and Fire:

Mance is a big man, long legged and lean, broad in the chest and shoulders. His once long brown hair is now gone mostly grey, laughter lines appear at the corner of his mouth. He is an unremarkable-looking man in his middle years, with a fondness for music. Mance was a wildling child taken by the Night’s Watch and raised as one of them.He was a loyal member of the Night’s Watch for most of his life until he suffered an injury while ranging, and was healed by a wildling woman. While he recuperated, she mended his torn cloak with swatches of red fabric. Upon returning to the Wall, the Night’s Watch commanders required him to replace his mended cloak with one of uniform black. This infringement of freedom caused him to abandon the Night’s Watch and live with the wildlings in the way he wished.”

What do you think Game of Thrones fans? Is this a good choice for the King Beyond the Wall? If not, who would you rather see play Mance Rayder.