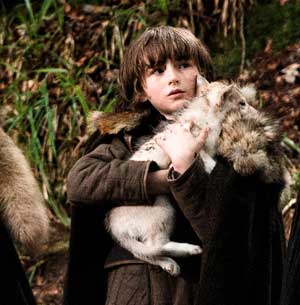 Brandon Stark is the fourth child of Eddard and Catelyn Stark. He is the second oldest son. He has brown hair, brown eyes and an impish, carefree nature. What can you expect from a 10 year old boy? As befits Stark custom, he is educated by Maester Luwin and trained in weapons and military tactics by Ser Rodrik Cassel. From time to time, his older brothers, Robb and Jon Snow, show him how to handle a bow and arrow. In Westeros, it is very important to learn how to fight with the weapons of the time and become skilled, should the time come to call upon the banner men of Winterfell.

In the books and the HBO series, we come to find that Brandon loves to climb trees and walls and is quite good at it. So much so, in fact, that his mother expressly forbids him to climb, once the King’s retinue come to visit Winterfell. After all, you cannot belong to a member of an established, well respected House and see one of its’ members fooling around, hanging from tree branches and scaling the moss covered walls. That wouldn’t be fitting! 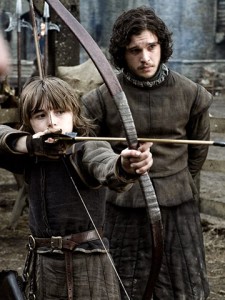 Sigh. Bran…if only you had paid attention that morning. If only you had not felt the need to climb the castle wall. Your startling and shocking discovery was beyond words. Had you listened and stayed on the ground, where it was safe, you’d still be running around, getting into fisticuffs with your brothers, and perhaps chasing Arya around the castle bailey. Unfortunately, you didn’t have the wherewithal to understand the gravity of your actions. Before you knew it, you were viciously thrown out of the castle window by Jaime Lannister, only to fall to the hard ground below. This event would send shockwaves throughout the Stark household and seeds of hatred would take root.

You were placed in your chamber, on that great big bed, lying so still. We all waited on baited breath in the hopes that you would wake up and remember everything that happened. When you eventually woke up, you knew your life would never be the same. You lost the use of your legs – but not your will to survive! You were lucky to have so many people who cared about you within your House. Lady Catelyn, who sat with you night and day, prayed to the Old Gods and the New, in order that you would wake from your coma. Not only did she stay devoted to you during that time, but when an assassin was sent in the night to murder you, she fought like the mother direwolf that she was to subdue the assailant. Summer, your direwolf, stayed right by your side to protect you when you were sleeping and attacked the assassin by ripping his throat out. Summer saved your mother’s life and yours. That’s loyalty! Old Nan sat with you, made sure you were fed, changed and entertained. Hodor, the sweet gentle giant, became your main source of mobility. Robb, your oldest brother, came to visit and check on your progress. Maester Luwin came to examine your injuries and to reassure you that all was not lost. Osha, the wildling woman, helped tend to smaller tasks and accompanied you on walks and horse rides. 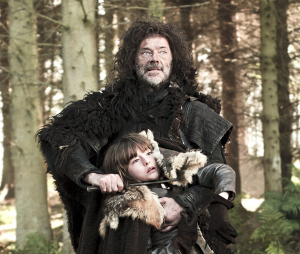 Most surprisingly of all, it was Tyrion Lannister who came forth with the suggestion to have a modified horse saddle and stirrups forged, so that you could once again ride a horse and have some degree of normality. This is Tyrion Lannister we’re talking about and he did say that he had a “tender spot in his heart for cripples, bastards and broken things.” It is his ability to identify and empathize with Brandon that makes his suggestion even more genuine.

The only parental figures left to Bran and his younger brother are Ser Rodrik Cassel and Maester Luwin. Season II finds Bran hearing the issues and petitions of the people of Winterfell. He believes in strength and justice, the way his late father did. Season II also sees the development of mature side to Bran. He has to be a good role model to his younger brother, Rickon, while trying to make sense of the war of the five Kings and how this personally affects Winterfell. 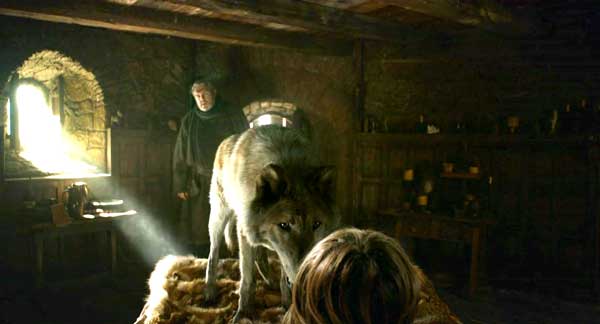 Although Bran must adapt to the changes in his circumstances, he must not forget that he is a Stark, first and foremost. Once Robb leaves Winterfell to call on his banner men and lead forces against the Lannisters, it is Bran that is thrust into the seat of power, so to speak. As the next male Stark in the household, it is up to him to set a strong tone and with guidance from Maester Luwin, he must become an example of strength and morality to the people of Winterfell. Whatever happened to being a child, having carefree summer days and sharing laughs with other children your age? Those days have passed. There is a chill in the air. Bran must now carry on at Winterfell, as his brother and father did before him. With this new found responsibility, Bran has also developed something else: the ability to see through his direwolf’s eyes. With so many of the adults in Westeros running around, either towards or away from war, Bran experiences visions on another nature. Perhaps he has the uncanny ability to see things that adults wouldn’t necessarily be able to pick up on. 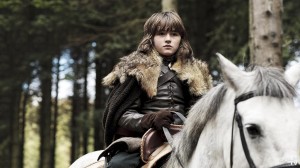 Bran begins to have strange dreams. He is confused and scared by what it means to be able to see through the eyes of his direwolf, Summer. This is an intriguing character arc for Bran: he is experiencing something of a supernatural phenomenon. Bran also has to deal with betrayal: Theon Greyjoy, who was their former ward, comes to seize Winterfell in a hostile takeover. Angry and scared at his betrayal, he was quick to dish some hurt right back by asking if Theon had hated the Starks the whole time. That’s pretty deep for a 10 year old kid to point out, if you ask me. The worst was yet to come: Theon and his ill-mannered Iron Island crew captured Ser Rodrik Cassel and executed him before a very horrified Bran. Tears and treachery aside, Bran had no choice but to surrender Winterfell, in order to save the people who lived there. In this respect, he is honourable, just like his late father.

Osha, Bran, Hodor, Summer, Shaggywolf and Rickon flee from Winterfell, understanding that Theon and his crew will not allow them to leave alive. After leading the Iron Island crew on a wild goose chase, they circle back and hide in the darkest caverns underneath Winterfell. Emerging from the dark bowels of the castle, Bran and company come out, only to discover that Winterfell had been attacked and burnt down. Bran finds Maester Luwin, who is dying and heeds the final piece of prudent advice: go North to Jon, where it is safe. Bran says his goodbye, before fleeing Winterfell. North to the Wall and to his brother Jon is the only option that makes sense. There is safety in numbers.

This brings to mind something Ned once said to Arya: “The lone wolf dies, but together, the pack survives.”  Check out our other Game of Thrones character profiles here.