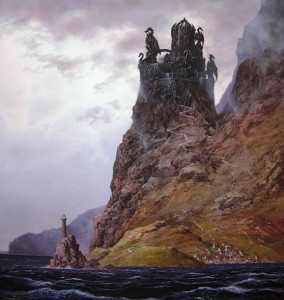 Native to the eastern continent of Essos, dragons are mythical creatures that have been extinct for over 150 years. Dragons breathe fire, they prefer to cook meat before eating it, and emanate great heat from their bodies. They have even been known to steam during cold nights. Dragons are relatively intelligent creatures and are capable of forming extremely strong bonds to the humans who raise them. It is believed that they are tied to magic; and since their extinction, the power of magic has diminished and the winters have grown colder.

Dragons were first discovered by the Valyrians 5,000 years ago and they mastered the art of raising them, eventually using them as weapons. The Doom of Valyria brought a sudden, drastic end to the Valyrian Empire and, ultimately, the only three dragons that survived were owned by the Targaryen Family on Dragonstone.

Much like their ancestors, the Targaryen’s used their dragons to conquer the Seven Kingdoms and, as a result, the family ruled Westeros for hundreds of years. Over the centuries, the dragons eventually died out, mostly due to a Targaryen civil war called the Dance of the Dragons. All that remained of these creatures were their petrified eggs, which are highly valued for their exotic beauty and potential to hatch dragons. Many Targaryens’ unsuccessfully tried to hatch dragons from these stone eggs. Some even went mad in the process. It wasn’t until Daenerys Targaryen walked to a burning pyre with her eggs that the cry of dragons was heard once more.

Drogon – Named after Daenerys’s dead husband Khal Drogo, he is the largest and most aggressive of her three dragons. He has black scales, his horns and wings are blood red, and he shoots a black flame with streaks of red. He is believed to be the reincarnation of Balerion “The Black Dread”. Drogon’s egg was black with scarlet ripples and swirls.

Rhaegal – Named for Dany’s brother Rhaegar Targaryen, who died at the hands King Robert during Robert’s Rebellion, he is green with bronze scales. Rhaegal’s eyes are bronze-colored, which glow with their own heat, and his flame is orange-yellow with veins of green. Rhaegal’s egg was deep green with shiny bronze flakes that disappeared when Dany turned it.

Viserion – Named for Dany’s brother Viserys, his scales are cream but his horns, wing bones, and spinal crest are gold. Viserion’s teeth are described as being shining black daggers and his eyes look like molten pools of gold. He shoots a pale gold flame with red and orange streaks. Although he is cream in color, Viserys is commonly referred to as the White Dragon. His egg was pale cream and streaked with gold.

Balerion – Nicknamed “The Black Dread”, he was one of the three great dragons of Aegon the Conqueror. The largest of all Targaryen dragons, Balerion’s teeth were as long as swords and he could swallow a mammoth whole. He shot a black flame and his wingspan was so enormous that his shadow would cover whole villages as he flew overhead.

Meraxes – Another one of the Aegon’s three great dragons, Meraxes was named for one of the old gods of Valyria and was ridden by Rhaenys Targaryen during the Dance of the Dragons. His skull can be found at the Red Keep in King’s Landing.

Vhagar – Also named for one of the old gods of Valyria, Aegon the Conqueror and his sisters used Vhagar during the War of Conquest. Vhagar was ridden by Visenya Targaryen and his breath was so hot that it could melt a knights’ armor and cook him inside. Vhagar’s skull can also be found at the Red Keep in King’s Landing.

During a battle known as the Field of Fire, all three of the great Targaryen dragons took to the sky together for the first time. Between Vhagar, Meraxes and Balerion, they killed 4,000 men, burning them alive.

Here’s a scene that none will soon forget. Daenerys Targaryen giving birth to her three dragons (Warning: partial motherly nudity):

Much of the above information was gleaned from the Wiki of Ice and Fire so give that a look when you’ve got some free time.  We can’t wait to see what HBO does with the dragons as they get older each season! We hope this guide gives you a bit of insight into the history and majesty of the Dragons of Westeros and Essos.

Charlie is one of HBO Watch’s newest contributors. Follow him on twitter and check out his other wonderful piece on Arya, certified badass of Westeros!