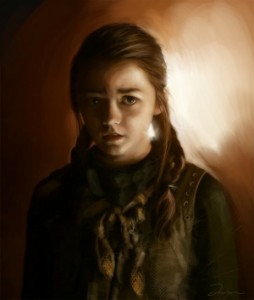 Today’s article comes from Charlie, a 26 year old college senior, amateur musician, and occasional dancer from Northern California. Accused of being an eccentric at times, he enjoys a bit of witty banter with a touch of sarcasm. Charlie considers life a gift, and never misses an opportunity to to live it to the fullest. Follow Charlie on Twitter!

I was late to catch Game of Thrones fever. Even though I’m a big fan of most HBO series’ and had previously seen the show, it wasn’t until I got the first season on blu-ray that I started to feel the buzz. Like any great series, I was suddenly overcome by the incredible storyline and the amazing imagery of Game of Thrones. The large, colorful cast made trying to pick out a favorite character especially difficult; even overwhelming, daunting, and visually exhausting at times. However, one character did, in fact, catch my attention. In truth, she completely blew me away. She is taking the world of Game of Thrones by storm and her name isn’t Cersei, Daenerys, or Catelyn; it’s Arya Stark. Played by actress Maisie Williams, Arya has quickly become a fan favorite among Game of Thrones viewers and it’s quite clear why: Arya is the most badass girl on T.V.!

HBO has always had knack for finding talented, relatively unknown actors to cast in their shows and they certainly kept up with tradition here. You wouldn’t know it by watching the series, but this is Maisie’s first role. It must be a dramatic life change for a teenager to be cast in such a big show, but to her credit, the budding young actress seems to be coping extremely well. Watching her development as an actress, and as a character, has been tremendously enjoyable and it makes the character even more interesting. There are several reasons I can think of as to why Maisie has played Arya so brilliantly, but the best part of her portrayal, and what makes it so special, is how well her strong personality transpires onto the screen.

Arya is a very strong character in her own right, and a difficult role to play. An extremely complex character, she deals with a constant struggle to find her own identity amongst the traditional gender roles of Westeros. Being a Lady doesn’t suit Arya and, as a result, we see her strive to find her own place in the world. 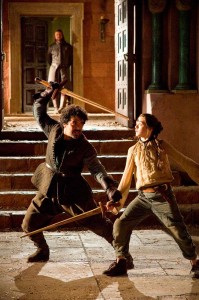 Her overly-feminized sister Sansa’s extravagant dreams of marrying knights and princes disgust Arya and the typical roles for women, such as marrying and having children, simply don’t appeal to her. She doesn’t want to be a boy, but she doesn’t want to be a Lady either. What Arya Stark really wants is to be accepted for who she is: a strong, free-spirited girl who just wants to make her own path.

Arya’s toughness is what really makes her such a badass character. She’s not afraid to back down from anyone; just ask poor King Joffrey and that fat stable boy who tried to take her to the queen for a reward. Hotpie wanted no part of Little Miss Arya after she told him that she “likes killing fat boys”, which is my favorite line. Furthermore, Arya isn’t afraid to stand up for what she believes in. Her constant turmoil with Sansa stems from the fact that Arya knows Joffrey is a bad person, and resents her sister for not seeing it as well. However, the water dancing scenes with Syrio are the most compelling example of just how badass Arya Stark really is. Syrio is such a great character and really has a profound impact on Arya. He teaches her life lessons and even teases her a bit. She screams at him that she isn’t a boy and that she doesn’t like “dolls and kittens”, but she remembers his words and it helps guide her through tough situations. More importantly, Arya’s moments with Syrio show that she is not like most girls in Westeros; Arya is different.

Expressing her internal battle has been one of the great successes of Maisie’s interpretation of Arya Stark. The way she brings the subtle nuances of this complex character to life, such as facial expressions, body language, and the way she delivers lines, has been terrific to watch. A perfect example is the famous Ned beheading scene in the episode “Baelor”. Phenomenal acting by Maisie in this scene, I think, sets her apart from the other young actors on the show. Specifically, the part where Yoren grabs Arya and she yells “Let me go! Let me go!” gives me chills everytime. She knows her father is about to die, and as Yoren tries to keep Arya from watching, the emotions on her face are a mix of pure pain, sadness, and terror as she shakes her head, softly repeating the word “no”. It’s an incredibly moving scene, and one which was acted out beautifully. And her talents have only gotten better. 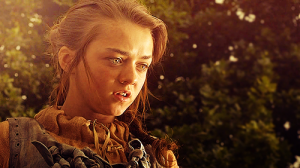 In the latest episode, “What Is Dead May Never Die”, there is another commanding exchange between Arya and Yoren; and, I think, one of the strongest scenes so far this season. It starts with a shot of the Night’s Watch recruits sleeping on the floor in a small room; except for Arya, who is awake meticulously cleaning Needle. Yoren sits beside her and they start to have a heart-to-heart talk about why both of them can’t sleep. Maisie is once again fantastic in this scene and it’s some of her best acting yet.

Maisie seems to have nailed the intangibles of acting. These minor subtleties are hard to put your finger on, but are used in a way to help actors really command a scene. During the dialogue with Yoren, Arya explains that the memories of Ned’s death are causing her sleepless nights. She has such a sad, afraid look on her face and talks with such a soft, trembling voice that it gives the viewer a remarkably powerful image as to what she is feeling.  “I close my eyes and see them up there. All of them, standing there. Joffrey. The Queen. And…and my sister.” The way in which these lines are delivered is extremely coompelling. The subtle pauses between names, the pain in her voice, and the intense, sad look in her eyes relays to viewers that this is something that continues to haunt Arya. Excellent acting by Maisie gives us a terrific understanding of how these dramatic, recent events have impacted her life.

With such an intriguing character, I can’t help but find myself becoming emotionally attached. However, that’s what we want as viewers. We want actors to bring a role to life in such a way that it captures our imagination and we end up caring about what happens to the characters they portray. It will be interesting to see what Maisie does with Arya in the rest of Season Two, given the important events that that take place in her story. She has done a great job so far of making Arya a very unique, elegant, and badass character; and I tend to think that she is probably the same way outside of acting. Whatever happens in Season Two, countless Thrones fans and I will all be rooting for Arya Stark to kick some major tail in the upcoming episodes.