The sixth episode is more of a transitional piece. It gives us a bit of a breather between the set-up of the plot, protagonists/antagonists and the concluding battle for the last of the Sacred Coins. Though the title of the episode is “Holy War,” this is really just the set-up for a war that must wage rather quickly in the two remaining episodes. This episode prepares us for what is to come. Let us look at how episode 6 of 30 COINS does just that. 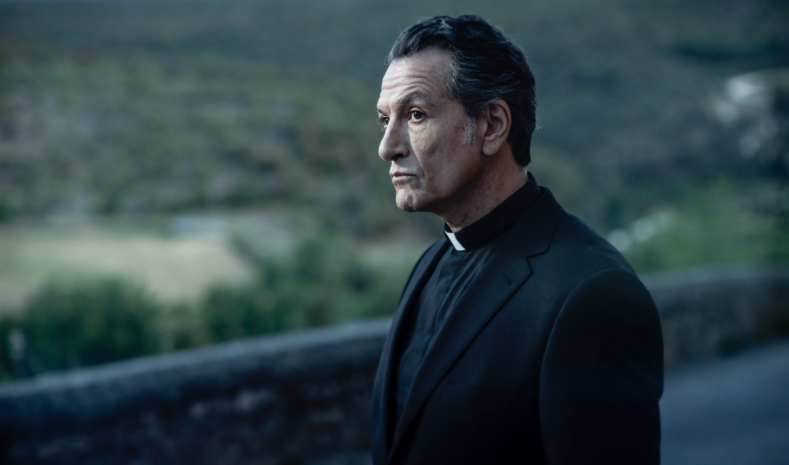 –Episode 6: “Holy War” Debut date: FEBRUARY 1 (9:00-10:00 p.m. ET/PT) Vergara (Eduard Fernández) flees from Santoro (Manolo Solo) and hides among soldiers and war hospitals in Syria. Elena (Megan Montaner) follows Roque (Antonio Velázquez) to Paris, but is terrified when the coin finds its way back to her. In Pedraza, Paco (Miguel Ángel Silvestre) is about to resign when a sinister new priest arrives.

Our parties are still separated and the threats against them are regrouping. Father Vergara is in war-torn Aleppo, Syria. Though we didn’t see the conversation, it is evident that an arrangement was made to meet an old friend, Lombardo, there. Why Aleppo? Because, according to Lombardo, Santoro can hunt down Vergara by seeking out his sense of fear, but his fear is hidden among the mass fear that wells up in embattled Syria, so Father V. is safe there.

Vergara is desperate to warn Elena that Santoro will be on the rampage again soon and she is not safe. His old friend aids him by telling him to seek Elena out via a ‘dream state’ because it is too dangerous to try to call her. So, our Father helps himself to some medicine from a makeshift hospital too preoccupied to notice

and holes up a bombed-out hotel to induce himself to dream and does indeed reach Elena. The fugue state they find themselves in is a slightly twisted & creepy Pedraza that is interesting to watch. In the dream, Elena shocks Father V. by stating that she no longer has the Coin and that she is leaving Pedraza and putting it all behind her. It only it was that easy.

The next day, Father V. does not have time to plan his next move as he is detained. The Syrians, who are Muslim, do not appreciate this Christian Catholic meddling about and imprison him with the intent of executing him the following day. How is he going to get out of this dilemma? By episode’s end, we still don’t know. So, what of Elena? She flees to start anew with Roque in Paris. He has a surprise for her. We know what it is, of course, and just how she will react to it, but

what we don’t know was that he was going to propose to her when he presents her with the rare bauble he came in possession of. And, lo, the Sacred Coin finds its way back in her! But the Cainites have hunted her down in Paris and employed a poor soul to do their bidding by possessing his soul and making him a deadly, unfazed assassin. In his pursuit of the Coin, in the most dramatic scene of the episode, he causes unsettled mayhem through the premier restaurant the couple was seated in. He is finally gunned down by security but also taken out is Roque. But the bloodied, traumatized Elena remains in the aftermath with the Coin. She and the viewer are left shocked by how it all played out. What next?

A quick note of the subplot that we didn’t see coming. Back in Pedraza a disillusioned and hurt Paco is to resign as mayor, two federal agents show up in town drawn to the unusual attention the town has been getting; they know of this due to the criminal reports Sargento Lagunas had to file. Of course, his reports never told of the real odd truths happening in Pedraza and spins his wheels hiding the truths from the agents. At episode’s end, the clergy, pictured at the top, arrives in Pedraza. He has been awarded the position as the new Father in town as the old one went MIA. We know him to be Angelo, a Cainite operative surely sent by Santoro. Oh, no, what next? What next, indeed?