I know I should have polished off this series weeks ago but I just got around to it.

Episode 8: “Sacrifice”
Debut date: FEBRUARY 15 (9:00-10:05 p.m. ET/PT)
Vergara (Eduard Fernández), Paco (Miguel Ángel Silvestre) and Elena (Megan Montaner) confront biblical demons while the Cainites seize the village. If they get hold of the 30 coins, an unprecedented power shall emerge, and with it, a Pope for the new world order under Satan’s rule. Written by Álex de la Iglesia, Jorge Guerricaechevarría; directed by Álex de la Iglesia.

The battle lines are drawn and Father Vergara is not afraid. He easily rallies Elena and Paco to his cause as well. It seems though, through some sort of unholy communion, that the rest of the citizenry are now under the demonic power of Angel. They are no longer screaming at the invisible gates to flee Pedraza but to stay and do Angel’s bidding. Merche, Paco’s wife, however, seems to be faking it. Perhaps she will aid in the final battle? But what is Vergara’s plan? 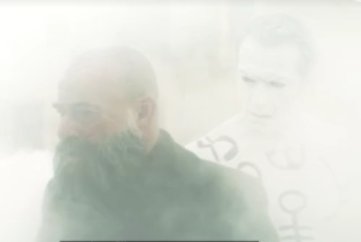 He has headed underground. It is from the caverns under the city that he can maneuver to key points and observe what is happening. He also has the aid of a few special tricks, like evoking a dove to be his eyes as it gets a bird’s eye view of the city. It seems Angel is preparing for Cainite Santoro to arrive to finally unite all 30 Coins. Remember, Angel holds onto the last one. And the evil Cardinal arrives with all his followers in attendance to participate in a Black Mass ritual. The city has strewn about the butchered bodies of sacrificial sheep, hogs, horses and whatever the hell else inside & out in preparation. Flies swarm everywhere as well (no doubt CGI ones). The end is nigh!

Vergara is determined to find some sort of triumphant demise to the evil order that has turned Pedraza into an evil Vatican. Paco, of course, sort of mucks things off as he tries to seek out Merche. She has an agenda of her own, aided by the ancient witch. She is focused on eliminating Elena for turning her husband away from her. A cursed pin in driven into Elena’s neck causing her to nearly succumb. Paco quickly learns that Merche is touched by her own kind of evil and that Elena is left to die. Laguna was also left to die bound up in jail, but Antonio saves him. We already know that Angelo has spiritual connections that might prove more useful than just rescuing the official. We will have to see, because we just aren’t sure Father V. can wage the battle alone.

Finally, the final moments arrive. Vergara has been captured but allowed to live because it is felt that he will prove to be Santoro’s greatest disciple in the end. Santoro has been dressed in papal robes of black and the final Coin has been placed with the others in the conical hat of the papal attire. The new Black Pope steps out on the balcony to begin his papal address to those gathered below. Vergara is beaten, bloodied and broken. Where is his help? Well, Paco has found the poisoned Elena and kills the witch hoping to break the curse to save his love. Laguna & Antonio are doing all they can to survive on the streets of the city. Merche 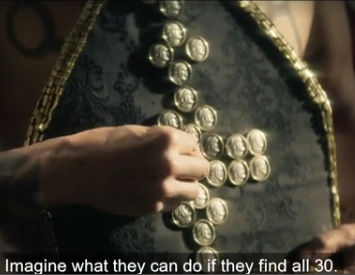 is in the crowd below the balcony. She had been flirting with a Cardinal Lagrange.

What next? I don’t want to spoil it, but yet, I do. The dove swoops down to the balcony taunting Santoro. That action gives Vergara enough time to muster his strength in one last rush to topple Santoro and himself over the edge. They hit the hard ground and the Coins scatter. A mad, maniacal dash across the ground ensues as the Cainite Cardinals fight each other over the sacred pieces of Judas’ silver! One Coin lands near Merche and she discreetly picks it up. With the relics scattered and gone, and Santoro dead the curse upon Pedraza lifts and… the set-up to Season 2 is launched.

Paco is able to race Elena to a hospital; Laguna & Antionio are safe as the citizenry return to normal and Angel has slipped away. Yes, he shape-shifts before our eyes and walks through a mirror, which we know can be portals, and arrives in Times Square NYC. The demon roams free to start anew. The Coins are now separated and we are left to only hope & pray Father Vergara is alive.

Here is hope that the hunt for the 30 Coins begins again in a second season of Álex de la Iglesia’s 30 COINS.