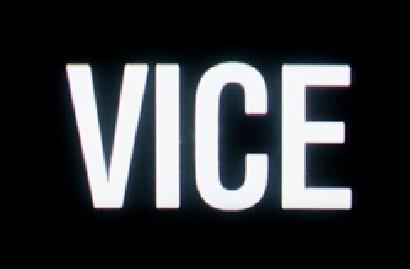 Overview: “Savior Seeds” – Genetically modified seeds have been planted around the world and hailed as a solution to global hunger. But these crops, called GMOs for “genetically modified organisms,” have also sparked heated protest. Isobel Yeung traced the path of these super-crops from the headquarters of American agribusiness titan Monsanto to the soy fields of Paraguay, and visits the Svalbard Global Seed Vault, high in the Arctic, to see what’s truly at stake when humans try to improve on nature. 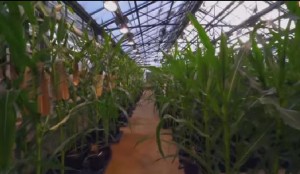 “India’s Water Crisis” – India is the largest democracy on Earth with an advanced economy, a highly educated population, and cutting-edge space and nuclear weapons programs. But like many countries around the world, India hasn’t been able to provide adequate clean water and sanitation systems for its growing population Open defecation is widespread, and about 80 percent of sewage in India’s cities flows  directly into vital waterways like the Ganges. Tania Rashid went to India to see just how bad the problem is, and why water is such a pressing issue here and around the world.

Expectations: In this edition of VICE we are given a new correspondent and a whole new set of issues to weigh in on. This will be the first report we have seen on HBO form Tania Rashid and Isobel Yeung offers another report with food as the focal point. Her prior segment was a look at overfishing caused by the demand to get seafood to our tables. 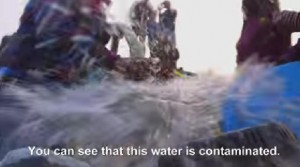 This latest VICE episode also ties into the theme of how to feed our world. Foodstuffs and water are essential to the health of all in our ever growing populace. And though the reports here cannot cover the total global problem of providing the necessary nutrients to the masses it will shed light on two strong aspects of the issue – the possible danger of GMOs and the basic need for uncontaminated water.

Though we are all aware of the agri-business of creating resilient and healthy crops I suspect there is a real danger and problem within the industry. Is this report going to raise the question that super crops aren’t so super? As for the pure water issues of India we have all seen pictures of the filth lower caste Indians wallow in. It is going to be nasty to get up close and personal with it I’m sure. The trailer gives us a hint to what is going on.

Gut Reaction: First up is “Savior Seed” by correspondent Isobel Yeung. Two of Yeung’s hot topics seem to center around food and the Orient. She lives in Hong Kong and has done a number of reports for VICE.com out of that part of the world and many of those reports center on food. One fun fact is that she appears on the Asian Food Channel. It is only for HBO’s VICE program that she seems to travel outside of her region, yet she still focuses on food. This time she hits a few spots around the world to talk about genetically modified organisms or GMOs. Again this is not the complete story on GMOs but an interesting take on the biggest agribusiness out there and its practice of modified crops and its effects.

She comes across as a fair and even-handed reporter not trying to paint the Monsanto business as a villain in this piece, but just lets the stated facts paint their own picture and leaves the viewer to their own opinions. She does point out that Monsanto is a business and needs to see a profit. The segment does not get into the science of GMOS to much or into the scientific findings or whether GMOS are good or bad for us. After all, plants have been hybridized long before lab assisted manipulation was born. But here is the difference there – two tomato species grafted to make a better tomato is different from totally alien material spliced 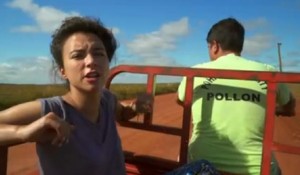 into the genetic makeup of a tomato or corn or soy, etc.

So while any verdict on whether these types of enhanced foods are a blessing to humanity or a Frankenstein’s monster unleashed on the world is not clearly known, what it known is that big business is the one really reaping the harvest. It is best explained in the segment, but this piece is really about how a big agribusiness is running the show to huge profit. Monsanto insists that countries like Paraguay buy their grain yearly because its genetics are modified differently each year. There GMO’s are protected against Roundup, the world’s best pesticide, so using that product won’t hurt your crops. Roundup, if you didn’t know, is a Monsanto product. So costumers are shelling a lot of money into Monsanto. Only now, weeds are starting to buildup a resistance to the pesticide so new modified seeds and grains must be purchased to keep up with it and the fierce cycle continues to no one benefits but Monsanto.

So that company and others like it, will continue to tell us and sell us these modified freaks of nature declaring they are helping feed the world….and the verdict will still be out on whether these GMOs are good for us.

India’s Water Crisis by correspondent Tania Rashid followed. She is a world traveler as well and also a contributor to VICE online. Though born in Saudi Arabia she eventually came to the U. S. to study History & Global Studies with a focus on South Asia and Africa. She has used that knowledge to take her places. Since then she has worked for Current TV and 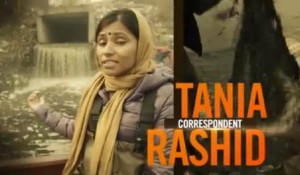 VICE and as we will see is willing to get down and dirty for her story. And what a report she offers us, a story most people might fear to do the legwork for because it is physically nauseating. She goes to India to report on the need for pure, clean water, a necessity for healthy life, and the lack of sanitation there. We knew it was rough there, but this is downright disgusting.

Rashid tells us of the importance of water, but it is too broad a topic to discuss the many problems around the world regarding the vital liquid. However, her segment does tack onto the end a moment declaring that the water issues of India are just one of situations where the quantity and quality of water is at stake. She doesn’t ignore, for example, that Western and South Western America are in dire straits due to the lack of H2O. As for India, the amount of water that flows does not seem to be the issue, but more the quality of it.

The culprit in all this is poor or no sanitation, open defecation and run-off draining into the sacred rivers. Now, if those rivers were so sacred you’d think they’d not let raw sewage and human waste flow into them? But there is Rashid walking, standing and smelling it. I don’t want to make light of this but do they want to live this way? I realize they don’t have the infrastructure that affords them plumbing. Hell, imagine toilet deposits making their way to the gutter on the street. How about public outhouses or something here or outlawing open squatting where you please? I am aware that it is easier said than done due to the sheer number of poor populace about. It proves frustrating, I guess in our eyes, to see people live this way. I couldn’t wrap my mind around it; it blinded me to any possible solutions at hand. The one saving grace was the trucks of pure water that arrive though, as this report proved, they too can become quickly contaminated. It is a tragic and 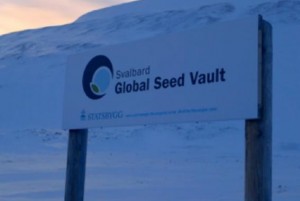 disgusting affair and proves to be one unfixable problem. However, fresh water is precious and we as humans need it at all costs.

In Conclusion: I almost forgot that a clarification of the title “Savior Seeds” is required, but I guess it all depends on your opinion of the piece. To me the special seeds of the title are not the GMOs that will supposedly feed the world, but the ones in the Seed Vault that houses pure, untainted seeds. They are the ones that just might someday save the world.  As for the water crisis in India, I don’t know what to say in conclusion except the admitted insensitive remark to “clean up your shit.”

I guess Shane Smith doesn’t know what to say beyond that either as he gives the weekly Debrief to Isobel Yeung.

Next Week: season 3 Episode 10 of VICE debuts FRIDAY, MAY 15 at 11:00pm. The installment looks at the war of being gay in Uganda and black market kidneys in Bangladesh. Until then – Peace.