Straight from an official press release comes word of yet another intriguing series for HBO in PERRY MASON:

1931, Los Angeles. While the rest of the country struggles through the Great Depression, this city is booming! Oil! Olympic Games! Talking Pictures! Evangelical Fervor! And a child kidnapping gone very, very wrong. Based on characters created by author Erle Stanley Gardner, this drama series follows the origins of American fiction’s most legendary criminal defense lawyer, Perry Mason. When the case of the decade breaks down his door, Mason’s relentless pursuit of the truth reveals a fractured city and just maybe, a pathway to redemption for himself. 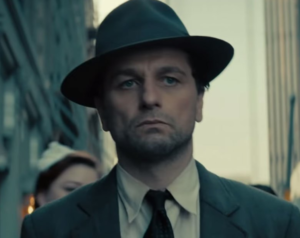 Okay, upon that announcement there are two main points to make clear – what an awesome character and what an awesome cast, or so I think. Let’s make something clear here; this series is a prequel to the Raymond Burr series that ran for nine seasons. He was a top-notch criminal defense attorney of the 1950’s, but how did he become one? What is his background and training? HBO’s look at the character works off that and gives us his younger years in 1930’s Los Angeles. The design stays closer to the original Erle Stanley Gardner novels than the TV series, exposing us once again to great Noir storytelling.

And what a cast to do it with, yeah? Besides The Americans’ Matthew Rhys in the lead how about Orphan Black’s Tatiana Maslany (pictured, right), and the great John Lithgow? She plays Sister Alice, the leader of the Radiant Assembly of God, preaching three sermons a day (21 a week!) to a hungry congregation and a radio audience that spans the country. Entertainer, politician, God’s conduit to the City of 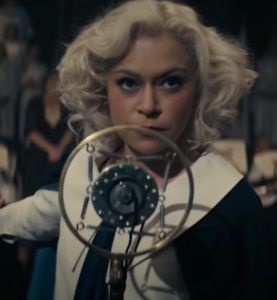 Angels, Sister Alice wields great power when she speaks and plans to use it in ways only she can know. And Lithgow is Elias Birchard “E.B.” Jonathan, a personal attorney at the nadir of his career and a semi-regular employer of private investigator Mason. A mentor and a father figure to Mason, E.B. is handed the kind of case he hasn’t seen in years: a high-profile parallel investigation to the LAPD involving a child kidnapping. 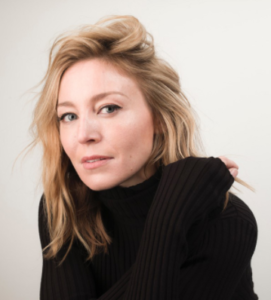 Also involved are Juliet Rylance (pictured, left) Andrew Howard, Eric Lange, Robert Patrick & Stephen Root (Yes, that Stephen Root, as in Fuches from BARRY). Rylance should play a recognizable character, Della Street, E.B. Jonathan’s legal secretary, she has the brains, know-how, creativity and drive to be a CEO at any modern-day corporation. But this is 1931… Della Street becomes Mason’s Good Girl Friday in the Burr series. Howard portrays Detective Ennis and Lange is Detective Holcomb. A commanding force as homicide detectives within the LAPD, they are

masters of intimidation with a knack for getting their way without regard for proper procedure. Patrick, last on MAYANS M.C., I think, but don’t forget him from TRUE BLOOD is Herman Baggerly, a major player in a variety of Southern California industries. He hires E.B. Jonathan and Perry Mason to run the big case in question and last, but not least Root portrays Maynard Barnes, a formidable prick of a man (!!) who knows how to glad-hand and intimidate whenever an occasion calls for either, District Attorney Maynard Barnes is confident in everything he does.

And we are pretty confident that with a cast like this and a  persona like Perry Mason that HBO should have a pretty darn good show on its hands. We will find out beginning June 21, 2020.