HBO has been making plans for the upcoming new year but many of us wonder just which shows that we’ve previously invested in are going to survive in 2023. Under-performers are getting pulled off the site so it is hard to say which titles will stay & which ones will go. One sure bet into 2023 however is PERRY MASON. 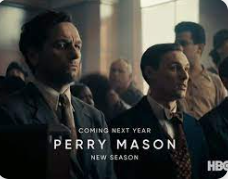 Season Two of the HBO Original drama series debuts MONDAY, MARCH 06 (9:00-10:00pm ET/PT) on HBO and will be available to stream on HBO Max. Though it was not mentioned in the official bulletin we deduce that the sophomore season will be eight (8) episodes long as was its inaugural season.

In this second set, it is months after the Dodson case has come to an end when the scion of a powerful oil family is brutally murdered. When the DA goes to the city’s Hoovervilles to pinpoint the most obvious of suspects, Perry, Della, and Paul find themselves at the center of a case that will uncover far-reaching conspiracies and force them to reckon with what it truly means to be guilty.

Francesca Orsi, Executive Vice President, of HBO Programming stated at one point, “It has been an exciting journey to work with the immensely talented team behind PERRY MASON. Viewers have relished being transported back in time to 1930’s Los Angeles each week, and we are thrilled to welcome the show back for a second season.” The premiere season received great praise but note that this story is moving forward with a new legal case and new characters and actors and despite the fact that new showrunners are in place, as noted here, the production value appears to be just as strong for Season Two as it was for Season One.

Monday nights, beginning 03.06.23, is the night for PERRY MASON this coming spring. Tune in.