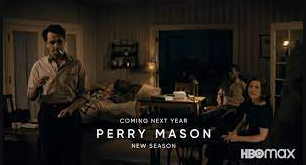 PERRY MASON. Now, here is a show we have been waiting to return, right? And, trust us, it will be in early 2023. Its initial season ran under showrunners Rolin Jones and Ron Fitzgerald from June 21 – August 09, 2020. The pandemic halted further timely advancement of a second season and then, new showrunners stepped in. Under the guidance of Jack Amiel and Michael Begler the sophomore season got into production finally and now is just finding the right window to premiere.

Back on the case.#PerryMason Season 2 premieres this February on @hbomax. #HBO50 pic.twitter.com/YaL9Oqa1Q6

I repeat, from a previous post, that the sophomore season, is months after the end of the Dodson trial from Season One. Mason (Matthew Rhys) has moved off 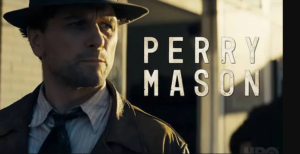 the farm, sports a pressed suit, and has set up a law firm with Della Street (Juliet Rylance). They will be pursuing civil cases instead of the tumultuous work that criminal cases entail. Unfortunately, there isn’t much work for Paul (Chris Chalk) in wills and contracts, so he’s been out on his own. An open-and-closed case overtakes the city of Los Angeles, and Perry’s pursuit of justice reveals that not everything is always as it seems.

So, by that, it looks like Perry Mason will dive into what he thinks is an easy case compared to the Dodson mess and will find out the hard way that what seems to be basic Law 101 may just reveal something harder to crack. But never fear, he will be on the case to the bitter end. It is the iconic Perry Mason after all. It will be nice to see Matthew Rhys back at it. Look for HBO’s PERRY MASON sometime soon after the conclusion of HIS DARK MATERIALS in February 2023.