After last week’s limp introduction to a new set of cast members, of whom the audience will need to completely recalibrate, “Driftmark” wades further into actionless dross with another desperately written, talky affair of which technical creative choices are downright distracting.

Set amongst the gathering surrounding the funeral of Lady Laena, forced dramatics ensue as some kids get annoyed at each other, Olivia Cooke continues to act her way further into a paper bag, and an inexplicable plotline concerning the legitimacy of Rhaenyra’s children bleeds into another week. Elsewhere, Otto Hightower is apparently the Hand of the King again, more or less discrediting the emotional heft previously committed to his role being stripped of him mere episodes ago. The final 10 minutes that re-pair Rhaenyra and Daemon provide much needed and desired progression where, for two hours, there has largely been none (at least, worth caring about), while the episode’s final positioning of next week’s successor was a pleasant turn of the screw, but overall, the opening to the second half of this season – post-time jump – has been such a stark (wahey) contrast to the near perfect first half, it is all to easy to be frustrated as a long term and hopeful fan, and genuinely concerned in terms of whether it can successfully reestablish itself and find footing in it’s remaining three episodes.

Olivia Cooke is a huge hinderance to this show, as a whole. If, as proven in Me and Earl and the Dying Girl if not much else, she was able to contribute anything, literally anything, other than the same pained, woe-is-me grimace from scene to scene, this new iteration House of the Dragon would immediately be 10% better. As it stands, and given her plotting, one can only wish for a quick death at some point in the preferably near future to preserve the potential of future seasons’ credibility. Or perhaps, if leaping forward yet another 10 years next week (seriously), we can look forward to another recasting. It would be nice to get back the 20 minutes per episode currently missed out on as a result of time spent rolling your eyes. 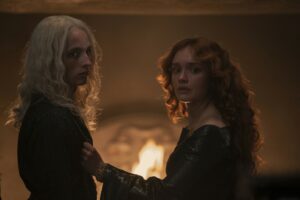 Final, but wholeheartedly necessary criticisms come in the form of questions regarding the cinematography choices strewn across “Driftmark”. There are multiple sequences featuring characters, outdoors, walking beaches at what is allegedly supposed to be a night or, at best, late dusk. However, anyone with eyes would query why it just feels off. Anyone with a moderate working knowledge of photographic practice can spot, from a country mile, that these sequences were clearly filmed in the bright of day, and graded to give the impression of nightfall. It’s cheap and bewildering given the show’s budget. Of a similar vein, someone needs to publish an essay on the lens choices for latter scenes that feature perhaps the most drastic depth differential between focal foreground and blurred background, you almost have to assume if the effect has been consciously and deliberately added in post-production.

It should be noted, though, that although this may read as a scathing indictment – and it is – it is one opinion born of passion for the material, and limited to the technical and dramtic delivery of this isolated episode. Given the strength of nearly all previous episodes, and the numerous duds scattered across the eight seasons of its predecessor, it would be ridiculous to consider giving up on what has delivered so much promise and, already, memorable moments of grandeur. Every show has blips. And, as previously commented, if Game of Thrones‘ track record is anything to go by, next week’s episode of House of the Dragon should be an absolute barnstormer.

House of the Dragon continues Sunday nights on HBO.