Our biggest time jump has finally happened as the latest episode of House of the Dragon takes us ten years into the future. We have left behind young Rhaenyra and Alicent and in their place we have two new faces in Emma D’arcy as Rhaenyra and Olivia Cooke as Alicent. In what was definitely a huge gamble on HBO’s part to recast two actors who we have become so comfortable and familiar with, its hard to say if it’s a decision that’s paid off as their first episode felt formulaic, joyless and lacking in substance in comparison to the previous episode at Rhaenrya’s wedding. 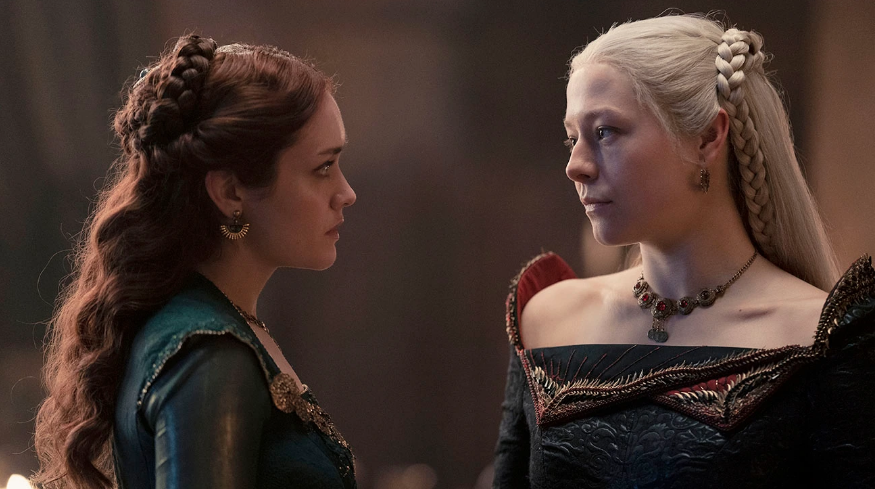 It would seem that Rhaenyra has succumbed to the ‘baby making’ destiny she so wilfully tried to avoid in the previous episode as we graphically hear her deliver her third child with Prince Laenor. As we know, their union is purely political and they agreed prior to their marriage that while they would be married, they would continue their own romantic endeavours privately. Something Rhaenyra has quite clearly been doing with her new sworn protector, Ser Hawin, as all her children are white with dark brown hair. Features that do not appear anywhere on either her or her husband but very heavily with Ser Harwin. Meanwhile, Alicent and the now very decrepit King Viserys are surrounded by three children of their own who have an interesting rivalry with Rhaenyra’s children. While it is lovely that they have grown such nice big families for themselves, the children’s issues are the least of anyones concerns. We as an audience have invested in the stories of Rhaenyra, Alicent, Viserys and Daemon and now we are expected the learn the names of six children and take interest in their petty feuds? I’m not sold on this at all, least of all after watching Alicent’s eldest masterbating out the window, he is what, 13? 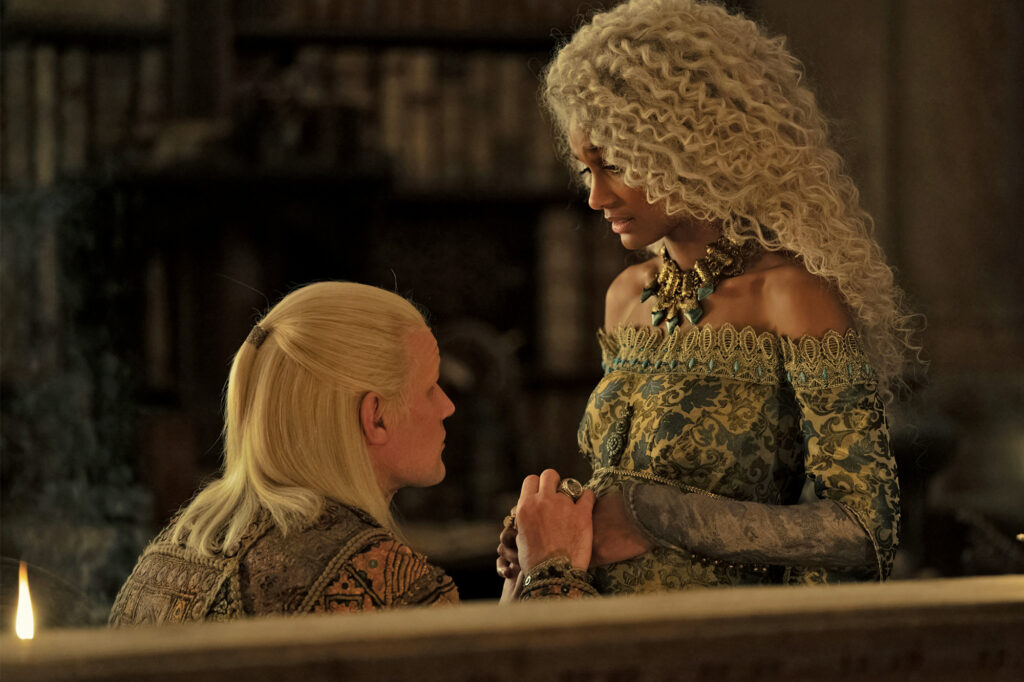 Daemon on the other hand has married Laena Valarian, Laenor’s sister, strengthening his own standing in Westeros and they have also been busily churning out babies with her heavily pregnant with their fourth in the episode. Again, three more children to invest in and take interest in. That’s nine children under the age of 13 that we have been introduced to in just over an hour. What with that and also becoming accustomed to the new Rhaenyra and Alicent, it makes for a tiresome episode.

There are some interesting developments, most notably between Rhaenyra and Alicent as she demands to see Rhaenyra’s new baby only moments after its been born and Rhaenyra being the tenacious and stubborn girl we know her to be insists on dragging her broken body up the stairs herself leaving a snail trail of blood behind her. Viserys is of course thrilled that Rhaenrya has had another child but Alicent is keenly eying the competition that her own son, Aegon, has for the Iron Throne. Rhaenyra is still the heir to the throne and thusly her sons will carry on the succession but it would seem that Alicent is perhaps hatching a plan of her own to ensure that Aegon is the heir, as is his birth rite as first born son of the King. The obvious indiscretion on Rhaenyra’s part is that she has been having an affair with Ser Harwin and that none of her children belong to Prince Laenor. But what is most confusing is the denial that everyone is in about it, even Rhaenyra herself seems to question Laenor when he questions their children’s parentage. Surely if they aren’t being intimate then its scientifically impossible for the children to be his and they would both know that? The fact its even being called into question is quite simply mind-boggling and a distracting, time consuming element of the episode 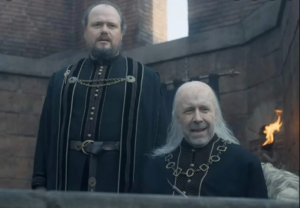 There are a lot of issues with this episode aside from the obvious weak storytelling and even weaker acting, but we can make some assumptions as to what the rest of the season might hold. What we do know is that Viserys is hanging on in there but definitely doesn’t have long left, nor is he in particularly fit state to be ruling so one can only assume that Allicent really is pulling the strings now. However, Emma D’arcy has some how managed to kill off all the charisma that Milly Alcock managed to breathe into Rhaenyra. We know her as this tough, loving, kind young women who is head strong and keen to take her place on the Iron Throne but new Rhaenyra seems the very opposite of this, so void of joy and happiness and deluded about her future. Perhaps Emma D’arcy is yet to really bed herself in as the Princess we have come to know and love and its no easy task stepping in to such big shoes. However, Olivia Cooke has proven once more that she is about as one-dimensional an actor as they come, just about mastering her ‘stern and concerned’ face to such an extent its the only expression she can force out. That and her lowered, hushed tones make her scenes somewhat irritating.

The new casting has not got my heart racing and in fact made me yearn for Milly Alcock and Emily Carey. However, I am still very much invested in their character arcs and especially Viserys and Daemon who both look like they are going to be going through significant change what what his declining health and Daemon being a widower once more. Perhaps he will come back for Rhaenyra

We will find out as House of the Dragon continues on HBO Max on Sunday nights at 9pm.