It’s been a slow burn these last few episodes, but true to form, the final episode of season one of House of the Dragon didn’t hold back and has suitably teed up the next season with the promise of another bloody, brutal battle for the Iron Throne. Rhaenyra learns of her fathers death and the Hightower’s deceit which immediately sends her into premature labour with what would have been her sixth child but during a hideously graphic birthing scene we learn the baby has unfortunately died. The bold and brutal nature of this scene is so perfectly acted by Emma D’arcy and the birth becomes something of a catharsis for her as she processes what is happening in the Red Keep she refuses any help from anyone and retreats into a quiet corner, like an animal, to give birth alone. Not only is she now grieving her father and the crown but also her newborn child. Thinking that this makes her fragile, she is encouraged by a room full of men who have all bent the knee to her as Queen and crowned her as such to immediately go to war using the dragons. Daemon reminds her that the Greens only have 4 adult dragons and they have 11, as well as some unclaimed dragons that they could claim as their own, making it a brutally unfair fight and one they would most definitely win. As their numbers of men are lacking, the dragons are their only chance. But Rhaenyra listening to the voice of her father in her ear is thinking pragmatically, she’s thinking big picture. Why would she want to destroy the city she would rule in? Something that we all know Danaerys Targaryan actually does do in years to come as her own grief sent her mad. She remembers her fathers words about the Song of Ice and Fire and that the realm needs to be united to fight a common enemy in the North, but when she tells Daemon this he grabs her by the throat and threatens her need to be peaceful in what will be an easy war. Up until now, Daemon and Rhaenyra have been a united front, ever since they married they have been a team with Daemon supporting his wife and her claim but the moment he fears that is under threat he turns. He is a loose cannon and Rhaenyra may not be strong enough to reign him in. However, Daemon signs himself to a new dragon, a huge gnarly looking dragon and he does so without Rhaenyra knowing. The question of his motives are called into question, is he simply supporting his wife and Queen and trying to do the best for her? Or is he looking after number 1?

What this episode does extremely well is show the immense pressure Rhaenyra is facing from swathes of men and soldiers to go to war when she doesn’t want to, she doesn’t see it as the best option. She is trying to figure it out and in her waiting to do so, Lord Corlys presents to her his allegiance from the Step Stones meaning that they can block off trade to the Kings Landing. Rhaenyra sees this is a win but she still needs to know that she has the Baratheons and Starks on side so she sends her beloved sons, who are keen to help her out, as messengers to Winterfell and Storms End to remind them of their initial oath to the future Queen. She sends Lucerys, her youngest, to the Baratheons in Storms End as she feels they will be the easiest house to sway as they share blood and she believes they will give him a warm welcome. Rhaenyra is above all, a very loving and devoted mother. Her sons want to help her but she doesn’t want to send them to their deaths so this task is nothing more than a simple errand. Luke, looking worried, is reassured by her gentle touch to his hand as she sends them on their way. However, Luke who is riding a young dragon who is not yet fully grown nor trained for combat, arrives at Storms End during a ferocious storm to see a much larger dragon has already arrived. Prince Aemond is already there, already securing the Baratheon seat by trading their pledge to the King for betrothal to his daughters. Their unexpected encounter turns sour and Aemond pursues Luke on dragon back. Luke tells his dragon to listen to him and do what he says but in the very nature of a wild animal, the dragon’s pursuit is survival and Aemond’s dragon also doesn’t listen to his commands and it becomes dragon vs dragon rather than rider vs rider, a fateful turn for poor Luke. 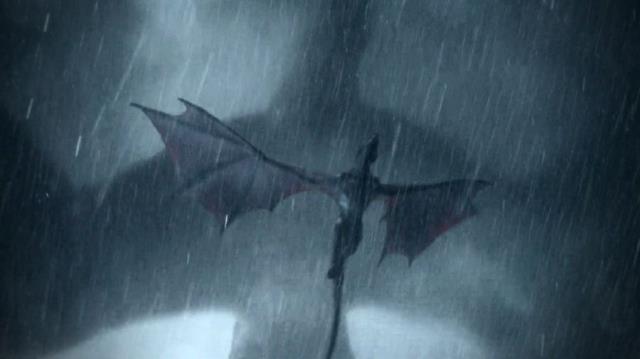 The final scene of the episode is perhaps the most poignant of all, as we watch Daemon deliver news of her sons death while everyone around her is working on her plan. The two parents, in a moment of grief once again, face the fire place. Rhaenyra composes herself and the episode ends on her furious face. The fire of grief inside her has been stoked further, she has lost her father, her unborn child, her seat on the throne and now her beloved son. The Hightowers should be worried.

The season was saved by these final two episode. The dodgy CGI has been overshadowed by some phenomenal CGI dragons. The change in actors now a mere blip in time. Emma D’arcy is an incredible Rhaenyra and Matt Smith as Daemon continues to be the best thing about the show. The two of them together are perfect as the fiery couple. If the worst thing about the whole show is Olivia Cooke, then what is there really to worry about? Something tells me she might get torched in the coming season.

All episodes of House of the Dragon are available to stream on HBO Max.