This weeks House of the Dragon continues to provide some interesting development of character and some slightly questionable CGI, as we see Daemon (Matt Smith) go full badass to take on the Crabfeeder – Craghas Drahar – in the Stepstones while Viserys (Paddy Considine) tries to play happy families and pretend that all is right in the world. Aren’t we all, Paddy? 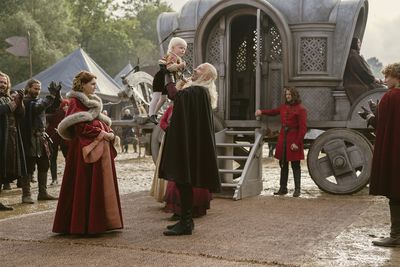 In our first time jump of the series we have travelled approximately 3 years into the future. Viserys has married Alicent Hightower, who is currently heavily pregnant and they are together celebrating their first son Aegon’s 2nd birthday. Just in that reveal, we have a lot to unpick. Queen Alicent has provided Viserys with his first son, a male heir. Something he never imagined he would have and in turn this has called into question whether he will name Aegon heir to the throne instead of Rhaenyra. Rhaenyra, who’s former best friend is now her step mother, exhibits resentment towards her father for remarrying so quickly and having a new child. Feeling pushed aside, she questions her own purpose within the family. However, Viserys has his own plans for Rhaenyra and urges her to marry and have children. To perform her duty as a women, to create strong political ties by marrying another family and producing heirs of their own. Among several potential suitors is Lord Jason Lannister of Casterly Rock. Reminiscent of Jamie Lannister, Jason is also a twin, cocky and keen on the ladies. His wholly sleazy proposal to Rhaenyra is about as romantic as a teaspoon and it becomes pretty obvious that all he wants is her dragons.

Interestingly there are two very contrasting roles of women in Westeros in Rhaenyra and Alicent. Alicent has dutifully followed her fathers instruction to befriend the King and become his first choice for a second wife. Within the space of three years they have married, had a child and become pregnant with a second. Alicent has reduced herself to nothing more than a baby making machine. She does also hold some influence over Rhaenyra and the King himself, something she very much nurtures. As the King gets older, it’s a wonder how much Alicent will be in his ear. Rhaenyra, on the other hand, really has no interest in doing the same and instead wants to ride dragons, enter battlefields and experience life the way a man would.

Viserys is completely ignoring the situation in the Stepstones. As we have seen previous, swathes of men are being eaten alive by crabs while nailed to wooden posts. A truly hideous way to die. Daemon has been waging war in the region for the last three years with Lord Corlys by his side. Corlys, who proposed Viserys marry his own daughter (yes, the 12 year old) was put out so much when he decided to marry Alicent instead that he has formed an alliance with Daemon in defiance of Viserys. The battle they have been fighting has been done so without the approval or backing of the Crown. Even with dragons, while they are suitable enough to kill anything on the land, they cannot reach inside the caves. Upon hearing of the chaos unfolding, Viserys doesn’t even seem upset or shocked. In fact the only time in this episode he has become animated is when he was trying to persuade Rhaenyra to get married. He has no interest in battles and wars. He wants to create political alliances with other families, strengthen the Targaryon name and have lots of babies with his new bride. But there comes a day when the King must wield his own sword, but today is not that day. Upon Alicent’s suggestion, he sends a fleet of ships to help Daemon. However, once Dameon hears his brother is sending him help, he rather defiantly heads into the battlefield alone with only one thing on his to do list. He single-handedly slays half of Craghas Drahar’s army and storms into the caves to bring back the head of the crab feeder. 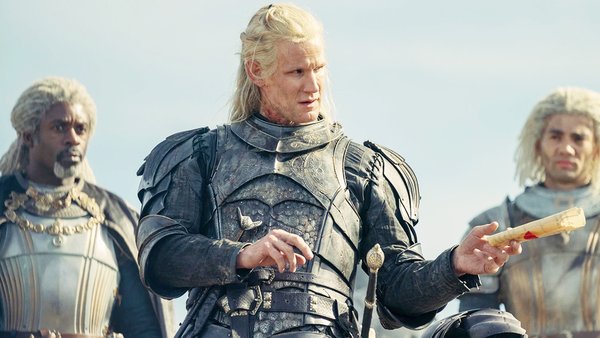 The episode shows contrasting characters, but can one exist without the other? Viserys avoids all confrontation, acts methodically, peacefully and calmly. He is raising a family, taking care of his children, ensuring the Targaryan’s are respected and in good standing with the other families. Daemon is doing the opposite, he saw Targaryan men being eaten alive by crabs and did something about it, as his brother was ignoring the situation for fear of war. Daemon sees it as a prize to be won, something to conquer. They have dragons! They can do anything!

House of the Dragon is a lot of fun and a great addition to the Westeros world building. The volatility of Daemon’s character and the tenacity of Rhaenyra’s make them easily the ones to watch, but there are some interestingly nuanced characters in the background who could prove problematic, Queen Alicent is one of them, as is the scorned Lord Corlys. The preview for the next episode shows some interesting tensions developing within the Targaryen family as Dameon returns, and maybe we finally get to see the infamous Sea Snake? Take a look below.

All will be revealed as House of the Dragon continues on HBO every Sunday night at 9pm!