First off this writer offers an apology for getting this review out so late. If you have wanted your own copy of the highly touted Season One of TRUE DETECTIVE surely you would have snapped it up by now. In fact you can order it right this second for about 40 bucks.  The reason for the delay is simple: HBOWatch was not privy to an advance copy so we had to wait until the street date. Then when it arrived, I admit I could have rushed straight into it but, I selfishly wanted to marathon all eight episodes again instead of just jumping into the new content. Well, that late night binge is over and I can say, even though I knew the story already from start to finish it was a treat to watch it again. Your mind doesn’t reel around as much thinking about clues, theories and such; you can really just settle in and focus on what great lines were fed to Rust and Marty by Nic Pizzolatto and take in the cohesiveness of the directing handled by Cary Joji Fukunaga. The experience upon repeat viewings may not be new but it is still fascinating. For those grabbing this series for the first time via this disc format you are in for a raw, rough, intense ride. But, let’s backtrack – starting with the opening theme.

Premise: In 2012, Louisiana State Police Detectives Rust Cohle and Martin Hart are brought in to revisit a homicide case they worked in 1995. As the inquiry unfolds in present day through separate interrogations, the two former detectives narrate the story of their investigation, reopening unhealed wounds, and drawing into question their supposed solving of a bizarre ritualistic murder in 1995. The timelines braid and converge in 2012 as each man is pulled back into a world they believed they’d left behind. In learning about each other and their killer, it becomes clear that darkness lives on both sides of the law. Written and created by Nic Pizzolatto (The Killing) and directed by Cary Fukunaga (Sin Nombre, Jane Eyre), TRUE DETECTIVE stars Woody Harrelson as Martin Hart and Matthew McConaughey as Rust Cohle. The series also stars Michelle Monaghan (Mission: Impossible III) as Maggie, Hart’s wife; Kevin Dunn (VEEP) as Major Quesada, the supervising officer in 1995; and Tory Kittles (Sons of Anarchy) and Michael Potts (THE WIRE) as Detectives Papania and Gilbough, the investigators now probing Hart and Cohle for answers. Also in the cast are Alexandra Daddario (Percy Jackson: Sea of Monsters) as Lisa Tragnetti; Elizabeth Reaser (The Twilight Saga: Breaking Daw 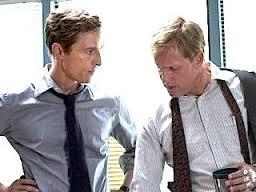 HBOWatch’s Perspective: This site’s first report on this show came back on 05.02.12 when we reported that the series was on the fast-track. A total of thirty-eight posts about the series, including casting news, reviews of each episode and Season Two speculation have been published onsite. You can read every one of them from this menu. In all we were quite thrilled with TRUE DETECTIVE from beginning to end as we joined millions engaging the personalities, philosophies and mysteries of the show. Once you are caught up in it you can talk about the possibilities and layers for days on end. We did and will highly recommend it to anyone. Now you can add Season One in its entirety to your collection of great HBO titles with the release of the show on disc. 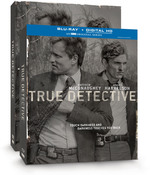 Formats: — Blu-ray with Digital Copy priced at $79.98, includes three discs. Note: If you never obtained a Digital Copy of HBO content it is quite easy. Included in the disc packaging is a paper that explains it in three steps.  Just go to hboselect.com and follow the steps and provide the authorization code provided on the paper and download your programming. — DVD is priced at $59.99 for a three disc set.

This writer has the DVD set. Inside the sleeve is the tri-fold box nesting the three discs. The box inside and out has well done black & white imagery of some of the cast. They are similar to the tone of the cover seen here. They feature younger and older Rust & Marty, Papania & Gilbough and Maggie & Lisa. Open the tri-fold to reveal the discs and a table of contents. remove the three discs to reveal the statement “Man in the Cruelest Animal.” 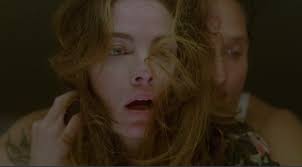 Extras: Everyone always digs the bonus material on a Disc set and TRUE DETECTIVE has got some nice ones. Special features for both the Blu-ray & DVD releases include:

– Making True Detective. A behind-the-scenes look at production on the hit series, featuring interviews with cast and crew and including never-before-seen footage from Episode 4. 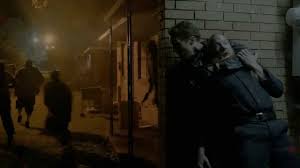 That episode was “Who Goes There” which features a bit of the seven-minute long single tracking shot through the neighborhood. In this featurette it is in the section entitled “Seven Minutes of Hell.” Also included are “The Story,” “Cohle and Hart;” “Louisiana,” and “The Look.”

– Up Close with Matthew McConaughey and Woody Harrelson. They are exclusive interviews with the stars about filming the series.

They offer cool insight into their respective characters, but some of what they delve into was not necessarily evident on the screen.

– A Conversation with Nic Pizzolatto and T Bone Burnett. An in-depth discussion with the series writer/creator/executive producer and the legendary composer on both the series and the pivotal role music played in the show’s development. 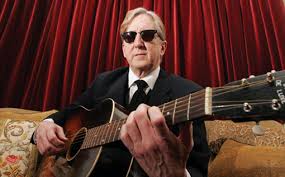 It is nice to include T Bone Burnett (pictured) here because the score was a real powerful component to the series or at least I think it is.

– Inside the Episode – Series creator/executive producer/writer Nic Pizzolatto and director Cary Joji Fukunaga discuss character development and offer insights into each episode of the series.

Even though some of the content here is not exclusive to the box set and seen elsewhere it is nice to have it all contained here for easy access.

This extra give you good reason for a repeat viewing of the series, as if an excuse is needed.

Maybe, this is the only disappointment. There is only one deleted clip and it is quite atmospheric. But, that might not be seen as a a bad thing because that means everything else was a keeper and used in the show and not strewn on the cutting room floor.

In Conclusion: So there you go. I wasn’t going to pick about the extras and lay them all out for you. Just like the series itself part of the fun is exploring and analyzing it all for yourself. I don’t see why any fan of TRUE DETECTIVE wouldn’t want to have a copy at hand. You might find something missed before or might want to watch it again after exploring the “Yellow King” concept or whatever.  Order it now for about 40 bucks and then you can revisit any time you wish:

It is all yours to relive in the TRUE DETECTIVE DVD/Blu-ray set. Enjoy as you await Season Two.