HBO has announced it is putting on the fast track a drama called TRUE DETECTIVE. It will be an eight-part drama series starring Matthew McConaughey and Woody Harrelson. What is surprising is that it is not heading towards a test pilot but has earned straight to series status. It is being labeled a high concept cop drama that will utilize  multiple perspectives and timeframes to tell its story. 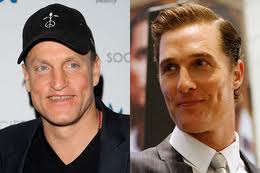 The work  is written by Nic Pizzolatto who wrote AMC’s “The Killing.” It tells of  two detectives, Rust Cohle and Martin Hart, played by McConaughey and Harrelson respectively. Their lives collide and entwine during a seventeen-year manhunt for a serial killer in Louisiana. The story takes us to the reopened case in 2012 and flashes back to the year of the murders in 1995.  All eight episodes of this stylized drama are to be directed by Cary Fukunaga of the recent “Jane Eyre” movie.

In a twist this show is touted as an anthology series. If it is renewed, each new season will feature different characters responding to a different crime in a different locale. It will be an examination of  “true detectives” and the process they go through to solve the crime. For its initial run I think Matthew & Woody will make a great combination. In fact, I’d dare to say that I wish it were a continuing series that they would both commit to as opposed to starting with new leads each season. Then again, think of all the combinations of actors they could get each year.

TRUE DETECTIVE  will be  McConaughey’s first foray at a TV series and Harrelson returns to the format after being involved in HBO Films’ GAME CHANGE. No premiere date has been attached to this news but, the term fast track to me indicates we may see this Fall. HBO Watch will keep you posted. Until then, we wonder, do you like the concept or the leads?

This comes right on the heels of the cancelled The Corrections. It’s interesting to watch how HBO chooses to spend it’s money and limited time slots. What do you think of the decision to green light True Detective?