HBO has put a halt to a series based on the 2001 novel by Jonathan Franzen called The Corrections. A pilot was shot in February of this year by the team of Noah Baumbach and Scott Rudin and boasted a star-studded cast. But due to the complexities of the plot the show couldn’t materialize. 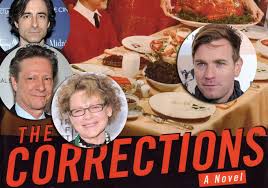 The piece revolved around a troubled Midwestern couple, the Lamberts, played in the pilot by Chris Cooper and Dianne Wiest and their adult children portrayed by Ewan McGregor (Chip), Maggie Gyllenhaal (Denise)  and Bruce Norris (Gary). Through the course of the plot we trace the lives of this family from the mid-20th century to “one last Christmas” together near the turn of the millennium. The way, however, Franzen threaded the narrative within that timeline led to the problems manning the series. HBO brass seemed to like the series, according to reports, and the performances but the decision came down to adapting the book’s difficult narrative. What works well on the page does not easily translate to the screen. It sounds a bit like the style of story-telling used in ABC’s LOST with plotlines going in different directions and each having their own set of flashbacks that could confuse continuity. From what I gather the narrative follows four different plot lines. There is the story of each of the three children and a separate one of the parents. They all deal with their own lives and the “corrections” they must make in them. They rejoin as a family during that cryptic “one last Christmas” mentioned.

Now, I have commented here on HBO Watch before about how I thought this concept would go to series and fill the slot left by LUCK’s cancellation. I made that guess having never read the novel or even that much news on the project. That prediction was solely made based on the fact that it was an award-winning novel, it had a solid cast & production crew attached to it and a pilot was already in the can. Good thing I didn’t bet anything; it is not going to happen. It is a work proved not logical for screen adaptation. I think I will have to hold off on my predictions for a while after all I didn’t see TRUE DETECTIVES being green-lit at all.