In what has become a common fashion as The Righteous Gemstones‘ exceptional second season unfolded, the highly anticipated finale again opens with a flashback that reveals slowly more and more about some of the primary characters, and what events have shaped them up to this point. This time, it is from more of a Pete Travis’ Vantage Point angle, as the episode opens back at Jason Schwartzman’s Airbnb where his Thaniel is very much alive, and talking shop with Lyle Lissons (Eric Andre). As it turns out, he has been the one spilling the beans on other televangelists in an effort to see off competition. When Thaniel demands the ultimate scalp in Eli, Lissons refuses, citing the Gemstone fortune as critical in their pursuit of Zion’s Landing. This all leads to quite the kerfuffle of grenades and bullets, ultimately ending a bunch of dead goons, and a dead Thaniel as previously discovered by Jesse, Judy and Kelvin episodes ago. 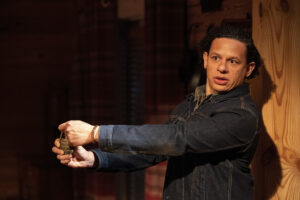 With Mystery #1 addressed, the rest of the finale is set up confidently, allowing all major and minor characters to converge onto one setting in the form of the Zion’s Landing groundbreaking. As predicted, but certainly not predictably, the Lissons do indeed prove to additionally be at the centre of the whole Cycle Ninja attempt on Eli’s life. Lyle foolishly admits this to Jesse, who proceeds to brain him with a stone and sling, while Eli finds out through Junior – his newly restored confidant and taskman, who one can only hope is ever present in Season Three. First off, Eric Roberts is just generally pretty awesome anyway, but the relationship between Junior and Eli is an important one. He is one of the few from Eli’s previous secular life who knows him for who he is, rather than for who he has become.

Disappointingly, the Lissons escape (after shooting the beloved BJ, the cowards) without a comeuppance at the behest of the Gemstone clan…or so they think. It would be all to easy to simply summarise the latter third of the last episode of this sensational season of the best comedy on HBO, but it continues to be so unforgivably slept on, that it seems respectful to leave at least a little something out there dangling to whet your appetite. This show is genuinely one that should be set upon by curious viewers like a pack of wolves. Whatever the furthest thing from regret is, that it what you stand to get out of the experience. 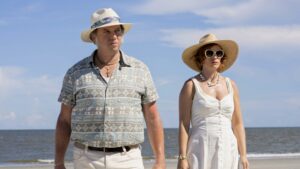 The production trio of Danny McBride, Jody Hill and David Gordon Green have always had unique strengths beyond the crass comedy that is their primary marketing point. Eastbound and Down was fucking dark, and Vice Principals was fucking sad (to use their choice expletive). All of it explores that which lies beneath a veneer, whatever it happens to be. In The Righteous Gemstones, it is large scale success and the facade of megachurch televangelism. It stares right down the barrel at modern America, and uses cartoonish extravagance to lay it bare to criticism. While that was the biggest strength of the first season, where the second season kicks on and excels is that this time, it has already forged its own identity and is able to spread its eagle wings further. The addition of Edi Patterson to an established writing team adds a new dynamic to a trusty base formula, and the big budget underworld elements contribute to a show that is genuinely greater than the sum of its already proven parts.

The Righteous Gemstones is available to stream in full on HBO Max.