Following a brief interlude in the main storyline last week, a necessity to enrich the back story of the season’s main protagonist, Eli Gemstone, we return to the present day in the moments following Jesse and Amber’s terrifying attack from the motorcycle gang – or Ninja Cyclists as Jesse to affectionately dubs them.  Jesse decides it’s time to take matters into his own hands and start to listen to the devil on his shoulder, whilst Kelvin faces a mutiny from his God Squad. 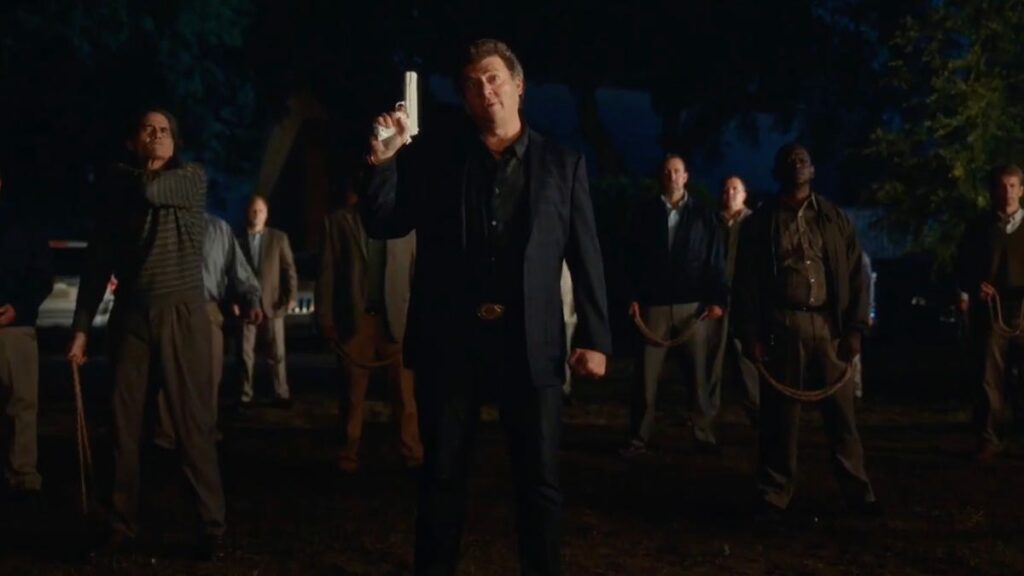 As the season has progressed, we have been privileged to watch John Goodman really take the lead as Eli Gemstone, as everything that is currently happening to the family is stemming from his past. Jesse and Amber were ambushed by a motorcycle gang, thinking it was Eli in the van. Amber, who fires the final and battle-ending shot, is reeling from her newfound respect from their peers in the church who want to repeatedly hear her retell the tale. However, Jesse doesn’t want people to think any less of him, nor that his wife is superior to him so insists that they can’t know for sure who fired that final shot, it may well have been him. Feeling his masculinity take a hit, he rallies the troops in the form of his married, male friends and they travel to Memphis, to exact revenge on Junior and his gang. This scene, which plays out like a Mexican stand-off, shows Jesse at his most vulnerable in a moment when he looks like he knows he is in over his head. However, out of the darkness comes his band of merry men. The beige chino and blue shirt-clad army of middle-aged men emerge from the trees to intimidate Junior with their slingshots. Yes, slingshots. Jesse goes biblical on his ass. 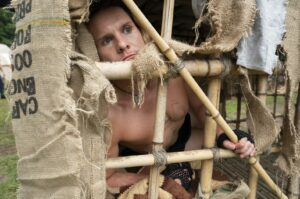 Meanwhile, Kelvin is facing a mutiny from the God Squad members who have all turned on him (of course, except for Keefe). After seeing his father so brutally break his thumbs, he lost the respect of his super-strong macho men who look to a new leader, the strongest of the pack – Torsten (Brock O’Hurn) – who looks like he’s just stepped off a Viking longship. He successfully challenges Kelvin by dragging and standing up the large cross, earning the respect fo the rest of the squad and sinking Kelvin into the position of cleaner for the house. His house. What is unclear here is why Kelvin is putting up with this. Surely he can kick them out? Has his security removed them? Regardless of this, Keefe continues to show his unconditional loyalty to Kelvin, even getting him dressed, helping him pee and challenging Torsten on his behalf. When Eli comes to offer Kelvin a very sincere and heartfelt apology, Kelvin does something different for once. He doesn’t bow down to his Daddy. No, he doesn’t forgive him. He makes his feelings very clear showing that Eli himself is starting to also lose the respect of his children. But that’s okay because, following a highly coveted handshake, BJ finally sealed the deal and has settled comfortably into Eli’s good side.

All of this leads up to the episode’s rather shocking conclusion when the motorcycle gang return, but this time they’ve managed to find Eli…

The Righteous Gemstones surprises with each episode, taking you down storylines you didn’t expect. From the trailers, it seemed like The Gemstones vs The Lissons was going to be the main and biggest storyline but the Lissons haven’t been mentioned for a while now. Is the resort dream dead? Or is Jesse simply biding his time? If Eli has succumbed to the motorcycle gang, who does he have in mind to take of the empire? Jesse is an obvious choice, Kelvin hasn’t earned his respect enough yet and Judy is too much of a loose cannon. The only other viable option would be Gideon, who has proven himself to be the most level-headed of them all.

With only three episodes left, it’s difficult to know what is going to happen next. With Eli either dead or seriously injured, who will be left in charge? And what will that mean for the empire?

The Righteous Gemstones continues on HBO Max with new episodes released every Sunday.