Feeling more and more like Succession every week, The Righteous Gemstones returned on Sunday on the back of its biggest ever cliffhanger. After being riddled with bullets at the end of last week’s episode, McBride and Co. are quick to establish that he has survived and is recovering in hospital – a narrative tactic which is to be admired, as the episode, rather than being a will he/won’t he dance, instead chooses to focus on the response from the family. Firstly, given how strained relationships have developed so far this season, it is used as a means of generating reconciliation – a theme already at the heart of everything Gemstones has been about since it restarted. And secondly, the impact it has on Jesse and how it forces his hand even further. It is Jesse’s arc that is perhaps most interesting this season as, where he began with a sense of entitlement as far as taking the reigns from his father, he is proving further and further just how impassioned he is to protect his family at any cost from increased threats both financial and violent. Where he was initially frustrated by Eli’s reluctance to let him lead the ‘church’, you can’t help but assume that by the time the dust settles on this magnificent second outing for The Righteous Gemstones, Jesse will have truly earned his birthright in every sense of the word and, indeed crucially, in Eli’s eyes. 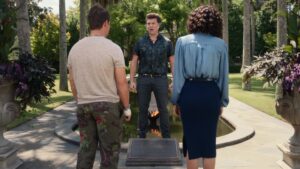 Girl power also rises to the fore this week in the form of the most unlikely triumvirates. While BJ, newly baptised and seemingly empowered, has taken it upon himself to join Jesse and Gideon at the hospital to protect Eli from an anticipated second attack in an attempt to finish the job, Judy and Amber keep the ever pregnant Tiffany company as she tries to track down the whereabouts of Uncle Baby Billy who has fled yet again. Tiffany, it should be said, getting considerably more screen time this season, is an absolute treat. She is so affably hilarious, small doses just aren’t enough anymore. As a characterisation, she is easy to laugh at, but equally, you cannot help wanting anything but the best outcome for her in every situation. 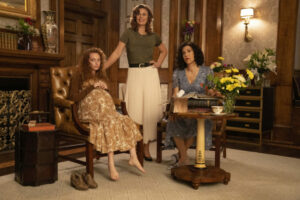 As it increasingly feels like a fucking Michael Mann movie every week, the episode climaxes with Jesse and co providing a match for the Cycle Ninjas. Where they are able to incapacitate a couple of them, one escapes at speed leaving only one Gemstone qualified enough to give chase. Gideon seizes his moment and puts his underappreciated stunting skills to practical use in support of the family, outmaneuvering the final biker in an exhilarating fashion to wrap up the installment on yet another cliffhanger. On the verge of the season’s conclusions with only two episodes to go, the pressing question now becomes – who has orchestrated these fluorescent attacks, and why? Junior and his crew seem far too obvious for a show this considered. From this chair, money would go on the Lissons, who perhaps think that if Eli is bumped off, Jesse would automatically apply inheritance to investing in Zion’s Landing. Perhaps, if they have quietly been banking on the certainty of a Gemstone investment this entire time.

The Righteous Gemstones continues on Sunday nights on HBO.