The premiere season of The Righteous Gemstones has officially wrapped up and what a way to end! Failing marriage, trips to Haiti, relationship revelations, and a Goth party all mixed together makes it unbelievable. The episode started with the Gemstone crew saying their goodbyes to Aimee-Leigh (Jennifer Nettles). When a bee decides to crash the party, we see how grief can make people frantic. Quite a hilarious start seeing how they can quickly tear apart a hospital room.

The kids come clean with Eli (John Goodman) about what’s been going on. Not all the details, as those are occasionally thrown in by Jesse (Danny McBride) but dad isn’t thrilled with his kiddos and in fact, thinks they pretty much all need a time out. Jesse is officially on break from the church, but this upsets him more 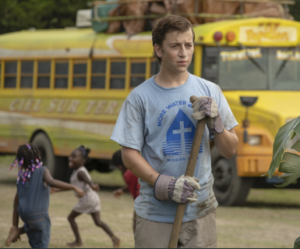 than his own son running off to Haiti. Amber (Cassidy Freeman) is not amused and informs him that if he wants their marriage to have a chance, he better go fix things and bring his son home. But for Gideon (Skylar Gisondo, pictured) he can’t face his family and the damage he caused with the blackmail scheme; that’s fair.  Gideon has gone down to Haiti to make a difference and work on himself. That is exactly what Jesse should be doing, but he is not and continuing to feel sorry for himself. It will be interesting to see what Gideon’s involvement will be next season and also the state of Jesse and Amber’s marriage.

On the Judy (Edi Patterson) front, she really missed BJ (Tim Baltz) and invites him to meet to pass him off the last of his stuff from her house. What ends up happening is Judy coming clean to BJ about her past. Judy wanted a boyfriend so badly that once she had one, she claimed to have all sorts of experience because that seemed like what he wanted. In retrospect, it wasn’t and actually didn’t end up pleasing him,  especially because it wasn’t really the truth. Ultimately, love couldn’t keep these two weirdos apart for long. I really hope to see more of their relationship next season as he kind of tones down her crazy and she brings out his confidence.

Kelvin (Adam Devine) is continuing to struggle finding himself and his purpose. He walks away from his youth group gig because he’s struggling only to find out, he’s not the only one. After banishing him from the house, Keefe (Tony Cavalero) has gone back to the Dark Side. 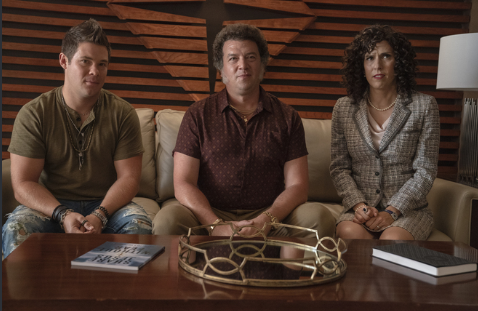 So, you see everyone has their own little cross to bear. We just hope that in Season Two we are able to see the Gemstones family work through it all while keeping us laughing along the way. See you next season guys!