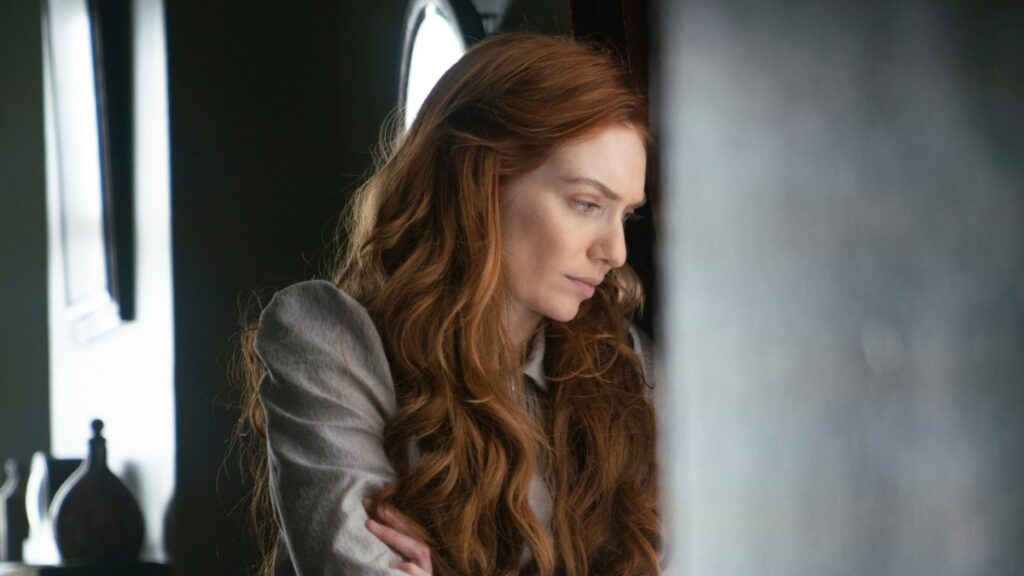 “Ignition” is an apt title for this third episode as we delve deeper into the continually complex world of the Touched in The Nevers. We’re quickly discovering that there is more, much more, that lies beneath the surface of this one. Episode Two gave us quite a revelation of what Lavinia Bidlow (Olivia Williams) knows. Hint, hint: it’s a bit more than she’s letting on.  Not to mention the exchange between Amalia (Laura Donnelly) and Maladie (Amy Manson) leads me to believe that Amalia has much more up her sleeve than previously considered. I thought the “this isn’t my face” moment in the premiere was quite funny, now I am thinking it might rather be true. Amalia True. She’s not quite 007, but she’ll get the job done.

She wants to recruit Bonfire Annie (Rochelle Neil) to the cause.  It’s not overthrowing the government.  It’s not that big, but also not that small.  Color me intrigued.  Annie wants to get paid though, so she’s not hugely invested in saving the Touched. Given the interaction that Amalia had with Maladie and how Amalia surprises Annie with what sounds an awful lot like Maladie’s voice, I’m starting to think Amalia can shapeshift and change her voice, a la Mystique if you will.  Annie blows up some opium of the Beggar King just to show him what’s what and that provides some amusing laughs.  I have a feeling that will end rather poorly, though.  Mary (Eleanor Tomlinson) isn’t sure if the orphanage is really the safe place it’s touted to be.  Fair, honestly.  I’d be pretty suspicious of most things if I suddenly had magic powers and the vast majority of society thought I was a menace or a clown show.  But my gut tells me that even though Amalia is hiding plenty — including some kind of history with her Doc friend Horatio (Zackary Momoh) — she’s trustworthy.

Certainly more so than the people using her image to kidnap and torture Touched.  The fake safe house is found and raided by Amalia with Lucy’s (Elizabeth Berrington) help.  Though we’ve seen little of it in action, we learned more about Lucy’s turn and backstory during the interrogation of the house mistress.  That had me bawling quite a bit.  Amalia takes the information they discovered to Lavinia, questioning who owns the building.  I have a feeling the owner is sitting right in front of you in a wheelchair.  Amalia is set upon while returning home.  Odium works for the Beggar King, and the Beggar King isn’t happy with Annie and now by extension Amalia.  Odium is also Touched.  “Can’t get this guy in the bath.”  Revealed to be the hardest scene to shoot in the whole season, it’s clear why.  It’s also clear why there won’t be a scene to rival it the rest of the season.  Unless Lavinia stands up and walks out of her wheelchair.  Utterly fantastic cinematography and acting!

On the side, Lord Massen (Pip Torrens) is putting a telephone in his estate, needing to move with the times. “We build homes to keep other people out, and then build machines to let them all in.”  Oof, that’s some well-written scorn.  He’s not wrong, but that also doesn’t mean it’s a bad thing.  Hugo Swann (James Norton) knows the Touched aren’t going anywhere so might as well make some money off them, getting Augie Bidlow (Tom Riley) involved.  Slimy and practical, he’s also in with Detective Mundi (Ben Chaplin).  Enough to arrange the raid on Amalia, searching for assets.  Their history seems a complicated, drunken one.  So why did Mary call off the wedding, Frank?  Touched aren’t the only ones who have to hide who they are for fear of punishment.  But Mary agrees to sing in the park, using Penance’s (Ann Skelly) amplifier and Frank comes to see her.  And for a brief moment, there is hope.  But Mary’s is a swan song and just as quickly as hope comes, it’s snatched away.  Or is it?

Let us know your thoughts on “Ignition” in the comments below…