One show that sort of left us hanging has been THE NEVERS. Remember, it was purposefully designed that its premiere season would be split into two parts. Part I debuted on April 11, 2021, with six episodes (HBOWatch has reviewed them) under the guidance of Joss Whedon. Mr. Whedon, if you’ve been following his issues, is officially off the project and screenwriter Philippa Goslett is the new showrunner. We trust that Goslett, who has been an executive producer on the project all along, will have little problems stepping up to helm the back half and any consequent seasons that materialize. So, we await Part II.

The back half of the season still gives us six more episodes. Could we see that happen exactly a year later in April 2022? We officially, via HBO, have heard no word but we find that through Ann Skelly, there is a bit of an update for fans. Via Instagram, the actress, who plays the Touched Penance Adair, announced the wrap on the filming of the season. 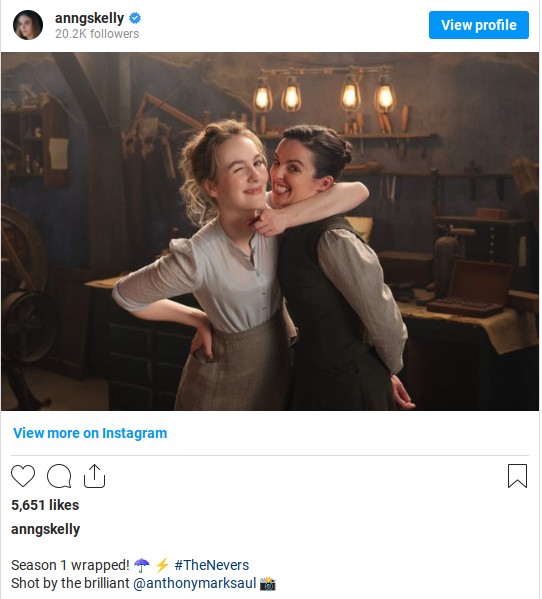 In the pic above Skelly is hugging in out with co-star Laura Donnelly in celebration. Skelly’s Adair is best friends with Donnelly’s Amalia True. Together they play Touched persons dealing with their new abilities and the prejudices they face now being different from the rest of Victorian English society. Adair can see the flow of electrical energy and True can glimpse future happenings. At the end of Part I, in the episode “True” AMaila True reveals her true identity to Penance Adair and it changes everything.

Sorry, no spoiler here – you have some time to get yourself caught up on Part I if you’re so inclined. I suspect, with post-production underway, THE NEVERS Part II won’t roll out until April. But I don’t have True’s Touch ability so, I’m just guessing.