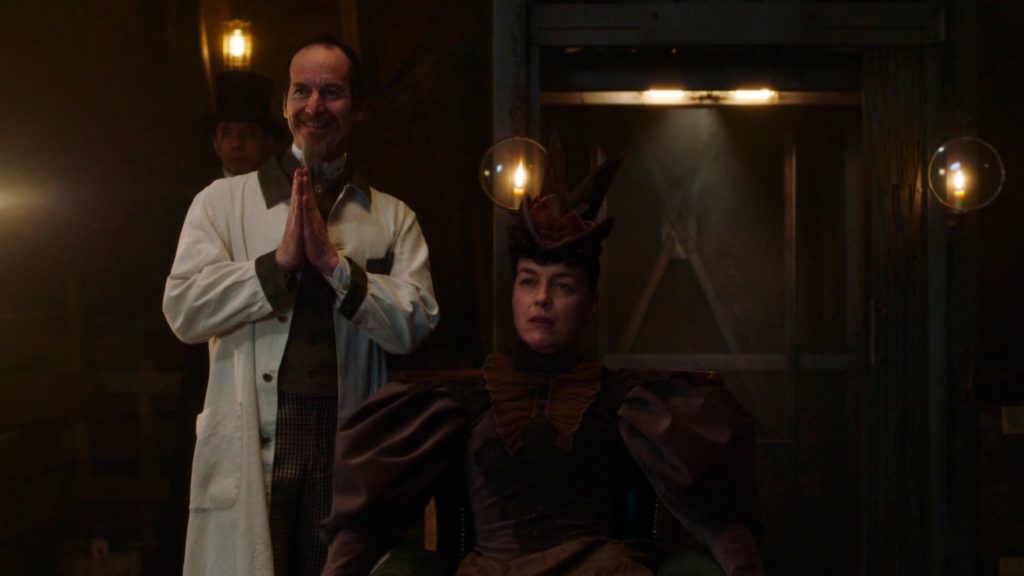 Like a Victorian corset, the second episode of The Nevers, entitled “Exposure,” left me breathless and frustrated. Hugo Swann is up to no good. Augie is a bird (well, sort of). Maladie and Amalia (or should I say Sarah and Molly) know each other. Detective Mundi and Maladie’s captive, Mary, also have history. Those who have been “touched”, or endowed with supernatural powers, are being abducted by faceless men and lobotomized. The philanthropic Lavinia Bidlow is more than she seems. There’s some sort of alien technology buried beneath London. Whew. The frantic pace, indecisive tone, and barrage of neologisms that afflict the first two episodes of The Nevers are a lot to endure when one has yet to become invested in the show’s world or characters. And how could we when The Nevers is more interested in showing us a tangle of plot lines that will be unraveled at some future date than in letting us catch our breath?

At one point, our heroine Amalia True implores Maladie to stop with the “riddle-me shit” because it’s “beneath” her. The Nevers would benefit from the same directive. The series is eager to give us mysteries to solve but has thus far failed to provide me with any motivation to solve them. The stakes are a little too high for my liking for the second episode of a series, but they’re also too low. As “Exposure” concludes, Amalia shoots herself to save her friend, Penance, and Mary, a woman who can soothe other “touched” people with her crooning. For good measure, Amalia also shoots the menacing Maladie. Apparently, neither gun wound is fatal. Though we’re assured that no two “turns” are the same, a generous pinch of plot armor seems to have been dispensed by the mysterious alien ship that visited London a while back. 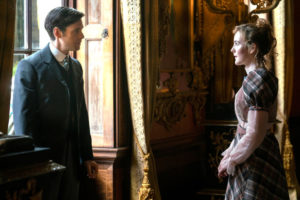 I couldn’t help but think of HBO’s hit series Game of Thrones and Westworld as I watched “Exposure.” In my defense, the episode features a man whose ability to enter the minds of crows recalls the powers of GOT’s Bran Stark. It also has a high-tech preoccupation with objectifying and exploiting the bodies of others à la Westworld. As I recall, both shows anchored their world-building to relatable, compelling characters which The Nevers has yet to do. The derivative premise of the series might have been a boon to its early episodes. Most of us have encountered narratives about mutant heroes before; the steam-punk genre certainly isn’t new. Had the show relied on its familiar, albeit fantastic backdrop to focus on its characters, I might be more game, later on, to learn about their world for the sake of better understanding them. Unfortunately, the show’s crowded cast of characters feels rather underdeveloped at the moment. 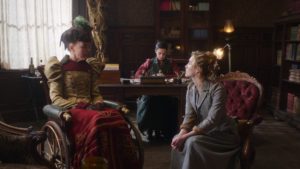 The Nevers labors under the unproductive notion that being a marginalized member of society is a personality trait. Thus far, we know little about supporting characters like Primrose or Desiree other than the unusual power that they possess and their vulnerable position in society (Primrose is a child, Desiree is a sex worker). I find Maladie’s characterization particularly troubling. For a series that ostensibly wants to explore the destructive nature of discrimination, The Nevers does not take a particularly nuanced approach to portraying Maladie’s mental illness (the show makes it clear that her defining characteristic is her “malady”).

Because her “turn” is poorly defined, Maladie’s femininity, sexuality, mental illness, and  powers are muddled together, and all of them are coded as “evil.” Game of Thrones already associated Daenerys’s ostensible descent into “madness” with villainy. From the Victorian era to today, men use female “hysteria” as an excuse to control the bodies of women. It’s a tired trope. Yes, the Victorians were not particularly tolerant of mental illness, but in a show with anachronistic technology and superpowers, I’d hope for The Nevers to do better.  The series made a gesture or two towards garnering sympathy for Maladie in this episode by suggesting that she has suffered in the past. But I hope that in the future, the show uses more sensitivity in its treatment of very real issues like mental illness and disability.

I’m not encouraged by the fact that The Nevers seems to be setting up Lavinia, a female character in a wheelchair, as another antagonist. What are we to make of a series that valorizes those with fantastical “afflictions” but pathologizes struggles that people experience daily in real life? Of course, there’s much to be said about intersectional identities and it is not the duty of disabled or marginalized people to be paragons of society. However, given the show’s superficial treatment of race, disability, and mental illness so far, I’m not sure that The Nevers is planning to offer nuanced commentary on social injustice. In 2021, The Nevers should not be considered a feminist show simply because its lead characters are women with the ability to beat men (and each other) into a pulp. Thus far, its pace has been too rushed and its tone too immature to say much of substance about racism, classism, misogyny, or ableism. But never say never. There are four episodes to go before the first part of this season ends. Let’s see what happens next.

How are you liking The Nevers so far? Let us know in the comment section below.