We’ve made our way to the halfway point for this, the final season of Silicon Valley. We’ve been with our tech nerds on their whole journey and I can’t wait to see how it ends for all of them. Everything moves fast in the Valley and if you don’t keep up, you might just get swallowed whole. Here was our post on the season premiere; now onto further episodes.

The episode opens with Richard (Thomas Middleditch) finding out mics for one of their games is taking user feedback and creating ads in real-time in the game. Ads, in and of themselves, are one of the most absolutely annoying aspects of technology these days, but I can’t even imagine trying to play a medieval game and you casually mention to your friend you want some Mickey D’s and boom, in-game, there you go!  One Mickey D’s for your gaming pleasure! Obviously, the team isn’t thrilled. Way to blow, Colin (Neil Casey). Meanwhile, Jared (Zach Woods) gives his notice to Richard and Pied Piper. He feels unneeded and knows he’ll be helpful to Gwart, who is just starting out, instead. Richard needs to dig together some money because it’s the Valley and they always need more money. Richard makes a connection at an event and believes in this guy Maximo (Arturo Castro) who for some reason Jared always kept at bay. Well, he offers a 10% stake in the company for $1 Billion dollars. Well hello there, sir. Only here’s the thing, it’s dirty money. Like really dirty. Like someone probably rubbed Jeffrey Epstein’s balls on the money, dirty. No thanks. And this week for Guilfoyle (Martin Starr) has a battle with HR where he thinks he came out on top, only to discover he didn’t.  Womp, womp.

Richard needs to find a way out from under Maximo though that’s proving hard to do. A run into Gavin (Matt Ross) provides some temporary relief and even an idea to save them both, but Gavin basically says ‘eff off’.  Through some digging, the team finds out they can preserve their shares and the majority stake if they do a quick deal with another company who will then have to deal with a government agency and I don’t remember the whole hoopla but if they screw over someone quick then they can buy Hooli and get out from under Maximo. But they have to act fast so Dinesh (Kumail Nanjiani) gets one over on his cousin who is doing better than him in the Valley. Such family love! And while Gavin is competing/cheating in his triathlon, the team runs around to get the required signatures and block Gavin from protesting the sale. In the end, Pied Piper acquires Hooli and they get out from under Maximo, though not without drawing blood.  Colin jumps ship to Maximo and Laurie Bream (Suzanne Cryer). 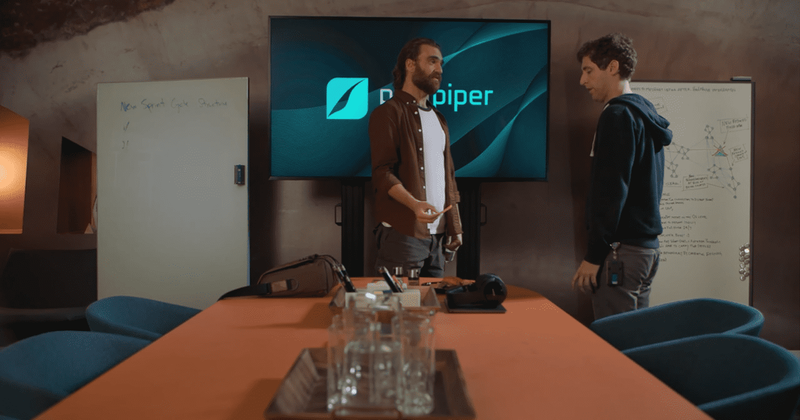 As Piper and Hooli find a way to merge, Richard also has to deal with an old supervisor. Ethan (George Basil) is ragging on Richy pretty hard and he’s not a fan. But also, it’s not good to have someone bullying the CEO. Dinesh suggests a video that will help Richard tap his alpha side and handle it. This leads to an improperly thrown punch and some possible blackmail from Holden (Aaron Sanders), Richard’s assistant. Monica (Amanda Crew) tries to worm her way into a Women in Tech panel when she sees Laurie. Monica takes a lot of effort to get a new project off her back and onto her new mentee’s who ends up having a better day than Monica at the panel. Talk about the appropriate karma! Gavin attempts to publish a book but no one is interested in him if he’s not talking tech, so in the end, he’s back to that anyway. Guilfoyle makes a friend this week who kicks his ass at chess but sadly doesn’t warrant a social media friendship. But the biggest moment this episode is when Jared finds his birth parents and makes contact. I cannot even fathom the pain of that moment and Zach Woods is such an outstanding and brilliant actor. He portrays the pain so beautifully.

Only a few more episodes left with our favorite tech nerds! What can we expect to see next?? The preview for next week offers clues. Silicon Valley, Sunday nights at 10:00 and, of course, on HBONow/Go.