And just like that, those quirky, crazy tech nerds waltzed into our lives and have now waltzed right back out. What a freaking ride it has been! It wouldn’t be the end of Pied Piper without some seriously insane antics and of course, questions we will probably never have the answer to… But for now, let’s delve into the final episodes of Silicon Valley and bid adieu to the best nerds around.

We open this episode with the return of Russ Hanneman (Chris Diamantopoulos) and his idea for an insane festival: Russfest. I genuinely don’t know who would pay tons of money to go party with this dude in the desert, but apparently these unicorns exist. He’s setting it up and wants PP to set up the internet infrastructure out in the middle of nowhere for f 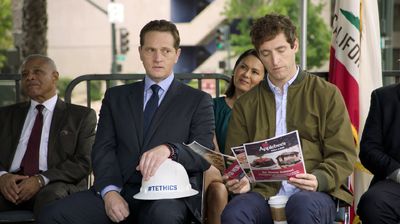 ree for the PR. Big fat no. But what’s a good PR move? Signing Gavin’s (Matt Ross) ethics in technology document, or “tethics”, is a solid move except Gavin is the worst and Richard (Thomas Middleditch) would rather eat literal shit.  I mean really, who would trust Gavin to do anything? With the tiniest bit of digging, Richard finds out Gavin stole his entire mission statement for his ethics board or committee or whatever he’s calling it. Gavin’s last move is to fall on his sword and ask for an investigation of Hooli.

Also known as that company Richard currently owns thus tying all of Richard’s business deals in a vice. Russ has dirt on the AG though which is kind of a nice surprise. Except it’s Russ who has committed the crime so he’d be also potentially screwing himself.In the background, Dinesh (Kumail Nanjiani) gets sent to Hawaii for a conference and in a series of unfortunate circumstances gets stuck with Gabe, has an allergic reaction, and gets harbored inside otherwise he’ll get sun poisoning. Also in the background, Guilfoyle (Martin Starr) and Monica (Amanda Crew) are struggling to get along with coworkers. They challenge each other to pick up their numbers, only he’s killing it and she’s…not. Well, he’s just using a scientific methodology for figuring out personal information which is usually people’s passwords which means he can change the info.  He turns the system against the HR woman and he and Monica happily run away in the sunset.  Ok, not that last bit.

The AT&T deal on the table is tenuous until Richard starts making big promises. After all, he is currently being investigated and no one knows about it.  In fact, everything seems to be quite a mess. Issues are starting to crop up at the festival and when AT&T decides to move on, workers decide to walk away. They’re already failing. Yaonet and Laurie Bream (Suzanne Cryer) are there attacking their work. Or are they? Actually, it turns out Yaonet doesn’t work and neither does Pied Piper.  Until Richard decides to try something crazy and combines Guilfoyle’s AI Son of Anton with his middle-out compression.  Bum bum bum! The issue is fixed and getting better. Maybe Richard will have a happy ending…nah.  In the background of this episode, Monica gets on Jian-Yang (Jimmy Yang) about his fake Girls Pied Piper Coding project.  In reality, he’s using them to farm Amazon reviews.

Fast forward ten years, a documentary crew is meeting up with the former members of Pied Piper.  So something must happen if they are important enough to warrant a documentary?  Let’s go back ten years and find out what happens…

The AT&T deal is back on since Richard saved the day combining middle-out and Son of Anton.  But after a weird text interchange with Monica, Richard figures out there’s a problem. As it always is with them, right?!  Well, it turns out combining Guilfoyle’s super smart AI with Richard’s insane middle-out compression created an evolving computer who would literally learn to hack nuclear codes.  Oh, dear. In order to actually do the right thing, they have to nosedive.  Double oh dear.  Remember the original story of the Pied Piper? The rats? Cue the rat march caused by the frequency of their phones.  It turns out the documentary is to catch up with the former disgraced-ish Pied Piper family. They’ve moved on to bigger and better things, though left me with some questions. Laurie is in prison, but I don’t remember a single explanation of why.  I’m assuming something with Yaonet but no confirmation. And Richard is a professor at Stanford, not weird. But he’s teaching the Gavin Belson School of Tethics.  I’m sorry, but no f*cking way this guy got an ethics school deal after literally admitting to not even coming up with his own mission statement.  Sorry, don’t quite buy that one.  Jian-Yang living in the jungle passing himself off as Erlich Bachman? That I buy.

I’ll miss the constant antics and shenanigans that came along with these weirdos. There’s no better old married couple than Dinesh and Guilfoyle. I wonder if I can find any supercuts of them bickering.  Maybe that will get me through until the next thing I can watch Martin Starr in.

It is not “Goodbye” for Silicon Valley. You can relive all six seasons on HBONow/Go.