Oh, that crazy Gentleman Captain Stede Bonnet and his crew. What kind of trouble/adventure is he going to get into now? Let’s find out as I review episode seven and eight.

So where did we leave of Captain Stede and his crew? Oh, that’s right, Lucius got his finger bitten by Buttons then he cut it off all on his own. Izzy challenged Stede to a duel and lost big time and was expelled from the ship. He also betrayed Blackbeard, Stede and the crew by consorting with Spanish Jackie. We also learned some new love interests and relationships have developed amongst the crew members. With that said let’s get into this week’s review.

Episode 7, “This is Happening” 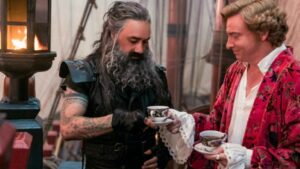 We start off episode seven with some morning tea as no good day would be without it. However, soon enough we are hit with some bad news, the ship has run out of oranges and now The Swede, no not Stede, has Scurvy. If you are unfamiliar with scurvy, it was a common disease amongst sailors who often would lack vitamin C. I won’t go into details of what the symptoms are you better look those up yourself. So, what is Bonnet and the crew to do? The obvious solution is to find a place to purchase more oranges for the ship. The closest place is St. Augustine and that is not good news for your friend Jim. But why?

As the ship approaches St. Augustine, Jim becomes more and more irritated with the idea of being there, but they need oranges, so Jim has no choice but to go with the flow. While searching for a vendor who would have some oranges for sale, Stede gets duped by a local and ends up buying a supposed treasure map. Stede how gullible can you be? My guess would be a lot since he forces Blackbeard to join him and Lucius on a treasure hunt. Reluctantly Blackbeard agrees as there is really nothing else to do at the moment. While several of the crew members go in search of oranges, Stede, Blackbeard and Lucius head out on adventure. 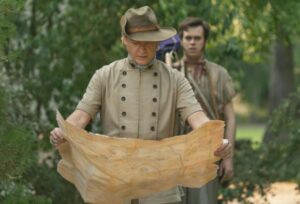 While Stede and Blackbeard are doing their own thing, Jim and some of the crew come across an old church with one orange tree in the middle of a courtyard. But we come to find out that this no ordinary place, instead we learn it is where Jim grew up and where his Nana still lives. But Nana, like Jim, is not your ordinary Nana. She is a knife throwing nun and as the unexpected visit to Nana’s place unfolds, we learn a lot more about Jim and their past. Once again, I won’t go into detail as not to spoil the episode but let’s just say Jims’s past is quite colorful. Also lucky for the crew, Nana agreed to give them some oranges if they fixed up the wall around her property.

Back to Stede and his adventures. Things are not going so well with the treasure hunting as Blackbeard is having a hard time having fun and adjusting to the leisure time they are having. Stede on the other hand is having a blast, exploring his surroundings and finding rare insects. For Blackbeard being in nature surrounded by bugs, insects, lizards, snakes is no fun at all. Soon enough, however, after killing a snake and making it for lunch, Blackbeard starts to enjoy himself and initiates a very nice conversation with Stede. That’s when things become a little bit awkward and quite confusing. Lucius is forced to witness this interesting exchange between Stede and Blackbeard. Now if you haven’t seen the show and are wondering if there is something going on between Stede and Blackbeard then my answer would be most definitely . . . Nice try watch and see for yourself. 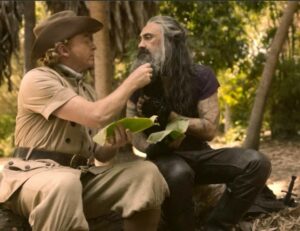 Going back to Nana’s place we learn the whole truth about Jims’s past and what their true purpose in life is: revenge. After lunch Stede, Blackbeard and Lucius continue on their treasure hunt. Their path ends up by a lonely tree on Jim’s land where Stede ends up digging and finding his very first buried treasure. To celebrate their successful day Stede and Blackbeard enjoy a glass of brandy as the day winds down onboard the Revenge.

Ah but wait the episode isn’t over yet, not until we have ourselves a little twist at the end. As you might recall, Izzy was gently and politely asked to remove himself of the Revenge. That did not sit quite well with him as he ended up at Spanish Jackie’s seeking revenge however he was not the only one.

Before we start reviewing episode eight let me give you a little background on Buttons, the first mate of the Revenge. He is a strange fellow that has a pet seagull named Karl, who enjoys playing the flute, naked while moon bathing which is exactly what he was doing when a small boat with a stranger aboard approached the Revenge. But who is this stranger? Is he there to cause trouble, seek revenge, reunite with an old friend if so who? As it turns out the stranger is no stranger at all, he is Blackboards old crewmate and a friend named Calico Jack.

In the previous episode we found out some things about Jim and how they are searching for revenge for their father’s murder. Jim left Captain Stede and Blackbeards ship in search of the men who have killed their father. Jims first stop was to revisit Spanish Jackie to get any kind of information on the killers. The encounter between Jim and Jackie doesn’t quite go as you might think or maybe it is as you might think, it all depends on your perspective. Lucky for Jim or maybe Jackie they both were in a good mood and not a killing mood as their meeting ends up being quite informative for Jim. 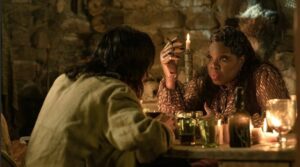 Unfortunately Jacks visit isn’t so welcoming and heartwarming for Stede as it is for Blackbeard. Reminiscing about old times makes Bonnet feel left out. Jack is also incredibly bad influence on Blackbeard as being around him brings out the old more rambunctious side of Blackbeard. Stede is quite disappointed in this behavior as he only knows Blackbeard as a more docile and calmer person. Jack is a wild man who enjoys playing such games as Whippies, Yardies and Coconut War. This does not sit well with Stede.

Stede eventually has enough of Jacks crazy behavior and kicks him off his ship, unfortunately Blackbeard decides to go with him. Is this the end of the Stede and Blackbeard story or will Blackbeard realize that he does truly care for Stede and come back? Only time will tell. One thing you may or may not have suspected, but Jack isn’t as loyal to Blackbeard as we previously have though as he betrays Blackbeard and sells out Stede to Izzy, Spanish Jackie and the English. As the English ships approach the Revenge, Stede stands there in a daze wondering what to do next. Should they fire at the English? Or try to run? Lucky for him his brave Knight in shining or lather armor comes back to yet again save the day. As the English board the Revenge they capture and arrest all of the crew including Stede and Blackbeard. Is this the end of their adventures together, will the English put them death, or will they once again receive a miracle?

Stay tuned for my final review of episode 9 and 10 to find out all the answers and so much more.