As “Our Flag Means Death” continues, so does the story of Pirate Captain Stede Bonnet and the crew of the Revenge. Each episode not only became more interesting but also a little bit funnier. We find out more about some of the crew, who they are as people, who they were and they became pirates. We also learn more about Stede and his life before becoming a Gentleman Pirate. Once again if you haven’t seen the show or the following episodes stop reading now.  Spoilers ahead!!!

Episode 4, “Discomfort in a Married State” 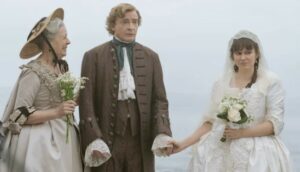 Episode four starts off with what could possibly be either a flash back or Stedes’ life flashing before his eyes as he lies dying on the Spanish ship after being stabbed and hung. We witness his marriage and life with Mary before he became a Gentleman Pirate. Their marriage was one of convenience rather than one of love, as many arranged marriages are. Despite being in a loveless marriage Stede did love his children and liked spending time with them. At the end of episode three we also saw a strange pirate standing above Stede as he laid dying. Was that Stedes guardian angel? Or was it another pirate out to get Stede? One can only speculate.

As we head back to The Revenge, we see that it has been taken over by Izzy and a mysterious Pirate Captain and his crew. Who is he, friend or a foe? In the previous episodes we witness Izzy being a not-so-nice guy, so, is his Captain the same way, only time will tell? We also see Stede, alive yet fighting for his life. As Stede goes in and out of consciousness in his dream state he goes back to his life with Mary. It is clear to see that Stede and Mary have other ideas about their marriage and their future together. Stede dreams of sailing the seas while Mary wants to live her life as a painter, raising their kids possibly alone without Stede. 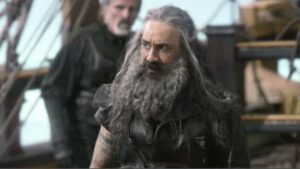 As the day goes on onboard The Revenge, we come to find out that the new Captain, and I only call him ‘new’ because Stede is out of commission at the moment, is none other than the infamous Edward Teach also known as Blackbeard. Throughout the episode we notice that there is something odd about Blackbeard, he has a weird fascination with Stede as instead of killing Stede, his crew and taking over the ship, he befriends Stede and takes care of him, healing him back to health. While the rest of the crew enjoys the company of Blackbeard, Izzy does not like this new version of Blackbeard as he only knows him to be violent, murderous individual. Will there be some head butting, will Izzy try to take over as the captain or will he fall into place like everyone else? 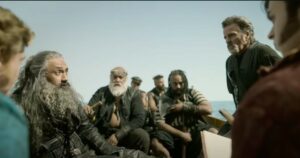 After surviving another crazy day, Captain Stede, Blackbeard and the crew sail on to conquer another adventure. We start off episode five with Stede, Blackbeard and some of the crew aboard a small boat ready to attack a ship. While aboard the vessel Stede doesn’t realize how brutal being a true pirate really is. There is so much that Stede has to learn to become a real pirate and Blackbeard is just the person for the job. While plundering the ship Frenchie comes across an invitation to a high society party. He brings the letter to Stedes quarters, that’s when Stede and Blackbeard decide to attend the party as a “joke”. Blackbeard made a deal with Stede, he will teach Stede how to be a pirate if he will teach him how to be a gentleman. This party was going to be a perfect lesson for Blackbeard in being surrounded by and acting like the upper crust.

Things don’t go as planned as Blackbeard becomes sort of a star of the whole party. That does not sit well with Stede, is he jealous that Blackbeard is getting all of the attention, or does he simply know what kind of people he is dealing with and is just being protective of Blackbeard. While Blackbeard and Stede are being entertained at the party. Frenchie and Oluwande come up with a plan on how to scheme some if not all of the money from the rich aristocrats. Let’s just say that the plan they come up with is quite brilliant as does the name of the scam. So, if you watch the episode, you will know exactly what I am talking about. 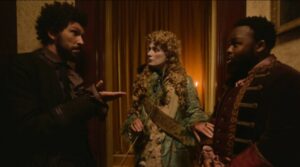 Back on The Revenge, Izzy is giving the entire crew incredibly hard time, assigning crazy task, bossing everyone around. However, the crew isn’t having any of it and they ignore him for the most part anything that he says or does. Izzy does bug one particular crew member making him work harder than the rest however after someone spills some beans about Izzy, he no longer has that much power.

Back on the party vessel, Blackbeard is enjoying himself to the max, drinking, dancing, singing and mingling with the guests, Stede on the other hand does not. He knows exactly who these people are and how cruel they can be. During dinner the upper crusts true nature comes out when they make fun of Blackbeard for not knowing proper dining etiquette. As usual Blackboards methods of dealing with such insults would be to kill everyone on board however, that is when Stede steps in and cleverly takes care of the snubs not by using violence but by using their own words against them. Sometimes words can be crueller then the sword. 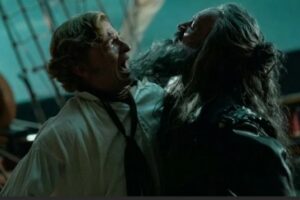 We start of episode 6 aboard The Revenge, as Blackbeard teaches Stede how to become a better swordsman. During their training some unfortunate yet well planned by Blackbeard, things go down. Due to some confusion and not witnessing the event, Izzy comes out with a different conclusion as to what was happening between Stede and Blackbeard. Because of this Izzy becomes even more frustrated with Blackbeard. But to understand this more you have to watch that part for yourself, as I will not be spoiling it for you. 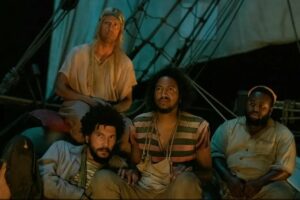 Still aboard The Revenge, Stede and Blackbeard are telling their scariest ghost stories. As one would suspect or figured, Blackbeard was the one to tell the scariest story of them all. After telling the scary story, Blackbeard has some wise words for the crew about learning how tap into their enemy’s fear. Simply put, be careful what you wish for. Let’s just say Blackbeard would rather show the crew, then tell them how to scare your enemy. The next morning it is exactly what Blackbeard and his men do, they call it “The Art of F**kery”. As usual nothing goes down smoothly, not even while pretending as one of the crew members gets his finger bitten by Buttons. Oops.

With a Dutch ship approaching, Stede and his crew decide to use what they have learned from Blackbeard and try to use it to scare the crew of the Dutch vessel. The plan that they come up with isn’t exactly what you would call scary or what Blackbeard would do, nevertheless in the end it still works as the Dutch run off crying and scared out of their wits. During Stedes art of f**kery to scare the Dutch, we witness Blackbeard acting rather oddly. He cowers in Stedes bathtub, shivering, covering himself with a blanket. This is not like the Blackbeard we all know and fear so what could be the cause of his fear?

Izzy has finally had enough of Blackbeard’s foolishness. He challenges Bonnet to a duel, but who will win? Is Stede doomed to finally end up at the end of a sword or will he trick Izzy and win the fight? As the fight progresses things don’t look too good for Stede as Izzy is a better swordsman and a better skilled fighter. Will Blackbeard step in and save Stede or will he watch his friend find a way out of the situation on his own?

Once again if you want answers to any of the question you must watch the show for yourself. I do have to say that the show does get funnier and funnier as you move past each episode. So don’t miss out on the crazy adventures of Captain Stede Bonnet, Blackbeard and the crew of The Revenge.