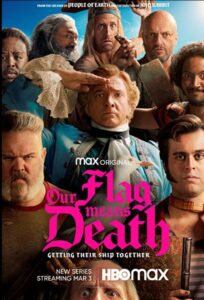 Now you might wonder if the series delivered what it has promised well, yes and no. “Our Flag Means Death” is a comedy but not your typical, laugh-all-the-time comedy. The forced humor at times is hard to digest yet when the moment is right you can’t help but to lose yourself to the silliness that is Captain Pirate Stede Bonnet and his crew. 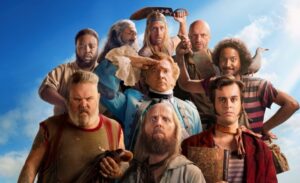 The Crew of the Revenge

Cleverly titled, “Pilot”, in the first episode we meet Captain Stede Bonnet and his crew. Stede Bonnet is a wealthy aristocrat turned Captain Pirate. His crew consists of plethora of interesting characters, sort of a band of misfits. Buttons, the incredibly odd ship’s first mate, Frenchie the musical one, Lucius the only one of the crew who can read and write, Oluwande the smart one, Black Pete the one who “sailed with Blackbeard”, and Jim the silent and mysterious one, just to name a few. Their ship the Revenge is not like any other ordinary pirate ship, it’s equipped with a fully stocked library full of books that the crew “is free to borrow books whenever” as Stede put it so eloquently. It has a rec center, state-of-the-art on-suite, the ball room, and jam room; no, it’s not for keeping delicious jams and jellies, but rather to relax and enjoy playing music. 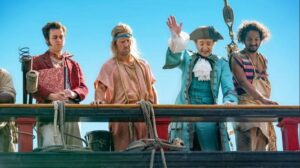 Stede is not like any other ordinary Captain Pirate as he treats his crew with dignity, kindness, and respect and he pays them wages instead of making them share the spoils of their plunder. He allows his crew to express themselves through creative projects as well as through a particular set of skills each pirate possesses. You could say that Bonnet is a people’s Captain, a gentleman, that comes from his rich and aristocratic upbringing. Despite the fact that Stede treats his crew right, few members still doubt his ability to be a Captain and consider a mutiny. To prove that Bonnet is capable of being the strong captain his crew demands, he decides that another attack on a ship is exactly what they need. Unfortunately, that ship did not turn out what they all thought it was going to be, as the ship they were going to plunder ended up being an English Naval Warship. 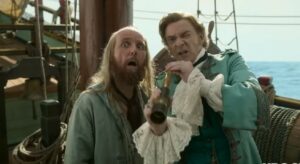 Now you might think to yourself what is Stede and his crew to do? Do they fight, surrender or have tea with the enemy? Well, the choice isn’t that hard after Bonnet finds out that the Navy Captain is one of his old school chums or rather bullies, Nigel Badminton. Even as an adult Stede still is intimated and bullied by Nigel. During their little reunion things don’t go as planned and Stede ends up killing Nigel on his ship while rest of the guests are held as hostages. This particular event proves to the crew of the Revenge that Captain Bonnet is not as soft and weak as they all thought, at least for now. Let’s just wait and see what the future holds for Captain Stede Bonnet and the odd crew of the Revenge. 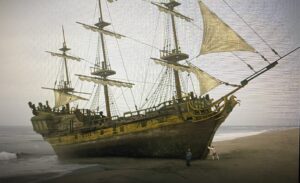 We continue the story of Captain Bonnet and the crew of the Revenge as their ship runs ashore on a deserted island. While stuck on land, Stede orders his crew to take a holiday or rather a short vacation. For normal folks’ vacation would mean leisure time laying on the beach, enjoying the sun and sand. Yet, for each pirate vacation means something else, punching each other in the gut, checking gun powder by blowing small amounts up, torturing the hostages or smashing rocks, you know the usual things that pirates like to do, not exactly what Bonnet had in mind. Because of a misunderstanding of what “vacationing” truly means, two of the remaining hostages escape while being watched by Roach, another one of Stede crew members. To retrieve the missing hostages Stede assembles a small search party. While searching, they run into bit of trouble with the natives. 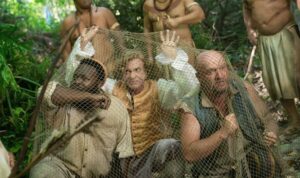 In the course of the captain’s absence, the remaining crew enjoys their time off, doing their pirate things. That is also when we meet three mysterious figures, are they natives, merchants or maybe pirates, we can only speculate. We also learn a little more about Jim, the reserved and peculiar mute, who he is as a man and what brings him on to the Revenge.

While remaining captive by the natives, Stede and his mates manage to convince the tribe elders that they are no threat to them as they are only mediocre pirates at best. The tribe elders agree and set Stede and his two crew members free, whilst also selling the hostages Bonnet was searching for. Now what is Stede and his mates to do, do they go back to the ship, or do they try to retrieve what’s theirs? Being the braver and more courageous Captain that he is now, Stede decides he will go and bring back the hostages. 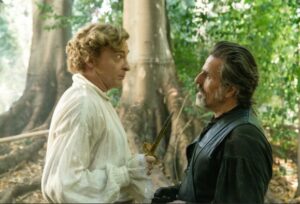 Once they located the missing hostages, to get them back, Stede has to trifle with the three mysterious men we met earlier. Bonnet’s tactics might not be exactly what a typical pirate would do in this situation, yet in the end, Stede succeeds in reclaiming his hostages, well at least one of them. Despite not being such a great pirate, Bonnet, somehow always manages to get out of tough situations unscathed. As the day winds down so does the crew of the Revenge as they sail away for another day of adventure. 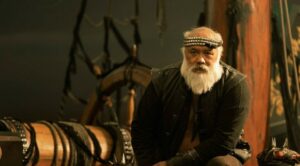 As the earlier episode was coming to an end, we saw the three mysterious men on board strange, spine-chilling, blood-curdling ship. Now if you wonder who they are, for now I can tell you who only one of them is. Izzy is one of the mysterious men Stede fought to get his hostages back. Episode three starts off on board of that ship as we see Izzy talking to his captain about Stede and the Revenge. Back on the Revenge Bonnet with the help, or rather no help at all from his crew, comes up with a plan on what to do with the remaining hostage. The final vote is to sell him to the highest bidder on the Republic of Pirates. The best place to do that so is at Spanish Jackie’s. 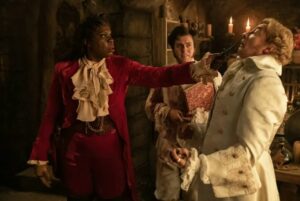 Things at Spanish Jackie’s don’t exactly go as planned as this establishment is a pirate’s den, filled with nothing but low lives, scoundrels and of course pirates. Despite being a total gentlemen Stede does get in quite a lot of trouble not only with Spanish Jackie but also with Izzy, who somehow manages to wander into the place as well. Once again luck is on Bonnet’s side as he manages to evade harm. Only one problem still remains, what to do with the hostage. The answer to that problem comes in the shape of one of Jackie’s husbands, Geraldo. He suggests to Stede that he might have a buyer who is quite refined just like Bonnet. 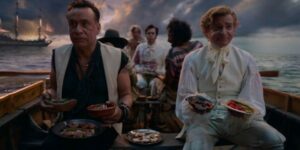 Onboard the Spanish ship, Bonnet and his crew once again fall into a bit of trouble. The Spaniards and Geraldo betray Stede and sentence him to death. Is this the end of the gentleman pirate or will Bonnet and his crew once again manage to escape? To be given the answer, would be to spoil the ending of the episode and I’m not about to do that, for that you must see the show for yourself.

The beginning of the show was a little slow, it was somewhat hard to get into but as I watched each episode that followed, I was able to enjoy the show more and more. Hope for now I have piqued your interest, so stay tuned for further review of the next three episodes.

“Our Flag Means Death” is booty for the taking on HBO Max.