In the last episode we left Captain Stede Bonnet, Blackbeard and the crew of the Revenge in some hot water, as the English attacked and boarded their ship. Will they be able to escape the English? Will Stede and Blackbeard be put to death for their crimes of piracy? Or will they, once again, receive another miracle?  To find out let’s look at the last two episodes of season one of “Our Flag Means Death”.

Onboard the Revenge, we see Admiral Chauncey Badminton, who you may and might not have figured out is Captain Nigel Badminton’s twin brother, whom Stede accidently killed in episode one. His first step is to interview the entire crew, including Stede and Blackbeard to find out the truth about his brother’s murder. Throughout the season we saw Lucius take down notes for Stede as a memoir of his adventures as Gentleman Captain. Even though the crew tried to hide the journal, which yes held the statements of the murder, due to their unfortunate clumsiness it ends up in Admiral Badmintons hands. Will this prove that Stede murdered Nigel?

While being interviewed by Badminton, Stede finds out that Blackbeard took the blame for killing Nigel. Oh, that Blackbeard, what a hero. He would do anything to save Stede. Yet, this time Stede has taken a higher road and admitted the truth to killing Nigel. For their crimes of piracy and murder both Blackbeard and Bonnet are sentence to death. However, because Izzy was working with Badminton, Blackbeard is set free and remanded to Izzy’s custody. But what will happen to Stede? Will he be so luck and end up being set free or his life will end with the hands of the firing squad? If you haven’t guessed it yet, the name of this episode is “Act of Grace” and that is exactly what Blackbeard calls out as the firing squad is ready to execute Stede.

If you wonder what the Act of Grace is, well it is a simple document drafted by King George that lets any pirate who abandons his life of piracy and pledges service to the crown will be granted amnesty for their crimes. 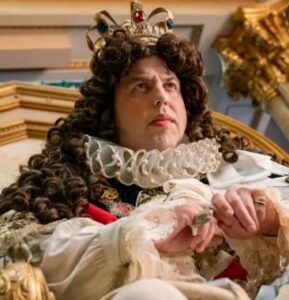 With the Act of Grace called out Stede and Blackbeard are pardoned for their crimes but only if both of them sign the document pledging their service to the crown for the next 10 years.  For those who are wondering, Blackbeard is in love with Stede as much as Stede is in love with Blackbeard and they would do anything and everything to save each other, so of course they both reluctantly sign the document. Does this mean that Blackbeard is now an outstanding citizen of the British army or is he planning something else?

As they are being enlisted, Stede finds out that he has been declared dead for months.  Somehow Blackbeard or “No-beard” as he calls himself, adapts to being in the Majesties Army quite well. Does that mean that his life of piracy is over, has Blackbeard become Edward Teach? Stede on the other hand has hard time adjusting and can’t believe that Blackbeard is fine with staying put and does not have an escape plan. This confuses Stede and as a result he contemplates his life with Mary and if he has made the right decision to run off and live life of piracy. But of course, everything changes when Blackbeard declares . . . well I won’t spoil that for you. You must watch the ending for yourself.

With both men free from the Majesties Navy and Stede and Blackbeard reunited it would seem they have run off to a distant land to start a new life, or has one gone one way and the other another way? Stay tuned for the review of the final episode of season one of “Our Flag Means Death”.

Episode 10, “Wherever You Go, There You Are”

Here we are at the final. If you have watched all the previous episodes, then there will be no spoilers as you know what happens in this final episode however if you haven’t seen any of them then this will be a big spoiler. Let’s dig in. 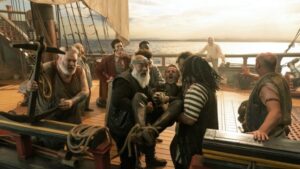 As we already know Blackbeard declared his love for Stede and Stede felt the same way. They both decided to flee the Majesties Navy and start a new life together but the question here is if they have done so. The previous episode ends with Blackbeard rejoining the crew of the Revenge, but where is Stede? Stede decided to go back home to his wife Mary and his kids. Let’s just say it isn’t exactly what Mary had in mind as she was completely shocked to see Stede alive and well. Coming home wasn’t as welcoming as Stede thought it would be as Mary has moved on with her life, his kids don’t really know him anymore or like him that much. Mary has made her new life without Stede quite comfortable and now that Stede is back he has flipped her whole life upside down.

Back on the Revenge, Blackbeard with his heart broken is having hard time letting go of Stede and moving on. He has become quite docile which only infuriates Izzy as he serves Blackbeard and not Edward. On the other hand, the crew of the Revenge like the new, kinder, calmer Blackbeard. 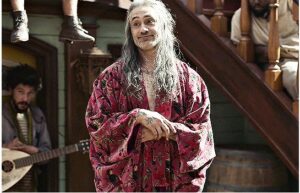 While Blackbeard is bonding with the crew of the Revenge, Stede is having hard time adjusting to life back home. Mary has rejected him in every which way, she can’t stand the thought of Stede being back home and ruining her new life. With that said she hatches a plan to get rid of Stede once and for all, however that backfires on her as Stede finds out her plan. Now what is Stede to do, should he report Mary to the police, should he be understanding of Mary and the position he put her in, or maybe should he come up with a plan of his own to free himself of this life of misery?

With Doug’s help, Stede and Mary come up with a brilliant plan to make Mary a widower but for “real” this time. Let’s just say it involves some “Art of F**kery”, a tiger and a corpse. This was the best decision for all parties involved. Mary gets to be with Doug and continue her painting, and Stede is free to finally be with Edward. But the question here is, will Edward want Stede back or will he go back out of spite to his old ways and once again become Blackbeard?

With everything set for the big plan, Stede, Doug and Mary get to work on making the whole town believe that Stede is dead once and for all. 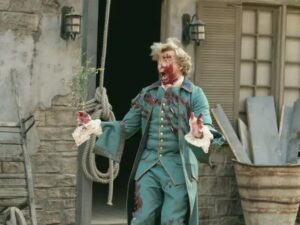 Back on the Revenge, Blackbeard goes back to his wicket and evil piracy ways. He betrays the original crew of the Revenge by stranding them on a deserted island. Is there no hope for Blackbeard, does he have so much hate, anger and pain in his heart that there is no turning back, only time will tell?

With his freedom from his old life, Stede is free to once and for all pursuit his dream of being a Gentleman Pirate and being with the man he loves.

Season one has left us with many unanswered questions. Will Stede be able to finally be with Blackbeard? What happened to Lucius? Will Blackbeard once again become the pirate he used to be? Will the crew of the Revenge get their ship back? Those and so many other questions have been left unanswered. Let’s hope we will get another season and the answers we deserve.

Overall, I really enjoyed watching “Our Flag Means Death”, I laughed, I cried, I felt the pain, I loved all of the love connections, in the end the show put a smile on my face. I hope that HBO Max decides to renew the show for season 2 and bring back Blackbeard, Stede and the crew of the Revenge and their crazy adventures.