Before the year ends this Editor has a few News items to offer those eager to keep abreast of what is happening in the world of HBO. As the New Year rolls around I’m sure there will be plenty more to talk about from the premier premium channel on TV. Here is the latest HBOWatch has noticed.

The Hollywood Reporter just had an interesting interview with Sue Naegle who has been HBO’s entertainment president since 2008. It is under her leadership that the premium channel has numbered the collection of critically acclaimed and award winning shows we enjoy today. Naegle says that

[box] “The best part of my job is that we can be making shows like Boardwalk, Thrones, True Blood but also female-centered comedies like Enlightened, Veep and Girls. It’s my primary responsibility to protect the talent and make sure their voices stay distinct. I’ve always wanted to be close to the content.”[/box] 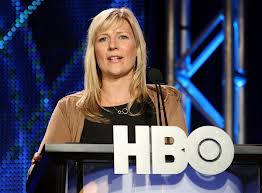 One of her first projects for HBO was doing her part to enable Alan Ball’s SIX FEET UNDER to make it to the screen. Since then she has guided a number of talents to her cable domain. George R. R. Martin, Michael Mann, Lena Dunham and Mike White all had meetings with her. The only show developed that didn’t survive was Mann’s LUCK due to a unique situation outside her control. Of her involvement Mike White (of ENLIGHTENED) said

[box] “It’s really exciting to see someone like her in the driver’s seat at HBO, that is, someone who cares about the content above all else.”[/box]

Though her network has won many an Emmy the coveted best in drama and comedy eluded HBO and Naegle this year. If you recall Showtime won for “Homeland” and ABC took the comedy prize for “Modern Family.” This is what she had to say about her rival premium channel.

[box] “Let’s not get crazy — I wasn’t raising a glass when Homeland won. But it’s hard not to root for them. I’ve known [Showtime Entertainment president] David Nevins for 20 years. Our networks have different personalities. That’s why it’s such an exciting time to be doing what we’re doing.I welcome the competition.”[/box]

Bring it on. Here is to a continued healthy run for Sue Naegle and HBO in 2013.

HBO has been holding its own when it comes to sports programming through the years and the all-sports-all-the-time channel ESPN earlier this Fall has made a deal to enhance that sports experience. ESPN is now going to get in on the game supporting HBO Boxing.

Though ESPN won’t be airing original HBO content like 24/7 or BOXING AFTER DARK it will be marketing HBO’s boxing schedule and offer supplemental coverage of all HBO’s pay-per-view boxing events. Mark Taffert, head of sports operations for HBO Sports has stated that

[box] “there is a very deep commitment at HBO in growing the sport of boxing and broaden the exposure for the top fighters and events. This collaboration with ESPN will benefit fight fans who already love the sport, will invite many more sports fans to connect with boxing and will greatly enhance the visibility of the fighters in the pay-per-view events.”[/box]

Starting in 2013 ESPN will market events, preview bouts, air interviews, photo ops & weigh-ins and offer their own style of highlights and blow-by-blow- recaps. So if you are a HBO Boxing fan and follow all the PPV events in the sport ESPN is now an extra outlet to make your boxing experience that much better.

Cinemax has one season of HUNTED starring Melissa George under its belt and it briefly looked like that was all it was going to get. The series, an espionage drama, started as a joint production between the BBC and HBO and aired on HBO’s sister channel for eight episodes in October and November of this year.

The BBC, which aired the series on BBC1 in the UK, was the head producing party of the project. Upon the conclusion of the first season the BBC decided to cancel HUNTED citing ongoing ratings declines as the primary reason. The very next day Cinemax renewed the series and decided to solely produce the show without BBC involvement.

The show, created and written by Frank Spotnitz of “The X-Files” fame, will be rebooted but will appear different in its new development. Spotnitz has admitted that the project is

[box] “too expensive to continue without BBC support. Now” he says, “it’s one of those funny things where it’s the same character, but it’s a different series.”[/box]

Good luck to HUNTED as it gets re-conceptualized. Season One can be watched on HBOGO.

Alex Gibney, the acclaimed documentary filmmaker of such works as “Taxi to the Dark Side” and “Enron: The Smartest Guys in the Room,” will soon have his next film air on HBO. MEA MAXIMA CULPA: SILENCE IN THE HOUSE OF GOD has opened theatrically in November and has caused quite a stir. As reported in this previous HBOWatch post , the film focuses on the sex abuse scandal that has rocked the Catholic Church clear to the papacy. Gibney has commented on it as of late to Deadline. The complete interview can be seen here.

You can understand the stir created by this topic as the scandal has been in evidence for years with no apparent resolve. HBO has obtained the rights to air the documentary and it is forthcoming in the First Quarter of 2013 as it was glimpsed in HBO “Yearender” commercial. HBOWatch and this writer await its airing.

Since the News Roundup has made note of the HBO Nordic deal we offer this tidbit as well about HBO on the global front. HBOAsia and Eros International have made a joint venture in India. Together they will offer content to the country via two channels. The first is called HBO Defined and will run first-run movies both HBO content and Bollywood fare. The second will be and HBO Hits and it will feature HBO content or redesigned series fashioned for local tastes. Think SEX AND THE CITY Delhi style I guess. This venture continues HBO presence around the globe.

And this concludes the News Roundup for HBOWatch. See you with more news in 2013!