The Editors could not line up a writer to review this movie but that does not mean we don’t want to draw your attention to it. If the trailer is any indication, and sometimes they aren’t a true representative, though you’d think by their very nature they should be, this looks like it was a fun one for Steve Carell. It is not a comedy however but a dramatic story of a Post-traumatic-stress-disorder (PTSD) sufferer, yet it seems whimsical. Let’s let the trailer set the tone:

WELCOME TO MARWEN follows the true story of Mark Hogancamp, a man struggling with PTSD who, after being physically assaulted, creates a fictional village to ease his trauma. Perhaps to make the whole story more interesting to moviegoers our lead strongly immerses himself into not just making the diorama but turning them into imaginary playthings to ease his mind? 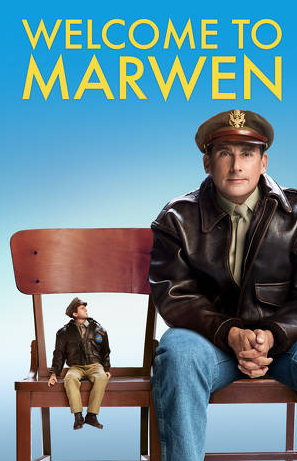 I guess the real question is does this form of therapy aid Mark or is he lost in a fantasy world becoming more distant from reality? Is he laughed at becoming an oddity to his town or is he empowered to survive in society? There is a female friend to help him along played by Leslie Mann. Apparently, the people in his life also surface as characters in his miniature doll world. For example, GAME OF THRONES’ Gwendoline Christie is listed to play his Russian housekeeper Anna and a Soviet compatriot in his fantasy world as well. Hopefully, director Robert Zemeckis and his co-writer Caroline Thompson answer those questions and include the answer to why he has PTSD to begin with.

Rolling Stone says, “This true story from director Zemeckis, about a hate-crime victim trying to heal himself through puppet art, isn’t hack work; there are ideas buried beneath its high-gloss surface and relentless uplift. But good luck trying to dig them out.” IndieWire adds, “The messaging here is dangerous at best, as the more complex truths of Mark’s trauma are steamrolled by Zemeckis’ reckless desire to turn the guy’s mind into a theme park ride.” So like I stated at the beginning the balance between the dramatic and the computer-animated whimsy doesn’t seem to meld seamlessly. Too bad but I still think Steve Carell has a ton of fun.

Regardless, it debuts Saturday, September 14 at 8:00pm on HBO.