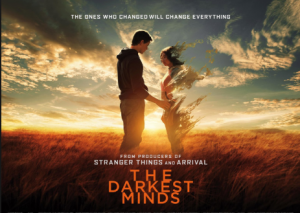 HBOWatch Editors were not able to line-up a writer to review this YA dystopian thriller to the screen but that doesn’t mean that we don’t want to draw your attention to it. You know, the world is filled with those with unique abilities. Depending on what milieu you settle into they are called “superhuman,” or “mutant” or “superheroes.” But no matter how you classify them they are still deemed dangerous and so they are in THE DARKEST MIND.

The concept was created as a young adult novel by Alexandra Bracken of the same name and rights were retained by 20th Century Fox to get the story told on the screen. Jennifer Yuh Nelson, more known for directing Kung Fu Panda animated fare, took on directing duties. The gist of the movie is this – in the future a contagious disease kills nearly 90% of the children throughout the United States, leaving the survivors with unusual abilities. As a result, the government places the survivors in rehabilitation camps, where they attempt to control them. The children are identified by color groups based on their abilities: Green (super-intelligence), Blue (telekinesis), Gold (electrokinesis), Red (pyrokinesis) and Orange (psionic ability). Reds and Oranges are considered so dangerous to others that they are ordered exterminated.

The story is told through one such youngster named Ruby, who is an Orange, who tricks her captors with her abilities and aligns with a lady named Cate. Cate, a worker at the camp, reveals herself to be part of the Children’s League, an organization that uses the survivors as soldiers to fight against the government, and helps Ruby escape and, to no doubt, expose the truth of what is going on in the camps. Amandla Stenberg (2018’s The Hate U Give) plays Ruby to Mandy Moore’s (47 Meters Down) Cate. Gwendoline Christie (GAME OF THRONES) makes an appearance as Lady Jane, a bounty hunter of the super-teens.

But is the movie super-charged, super-fun & entertaining?  Well here is what our go-to says and note that the actual audiences give a lot stronger rating than the critics’ consensus. So, you be the judge for yourselves. 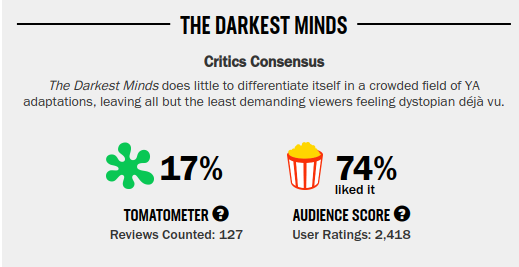