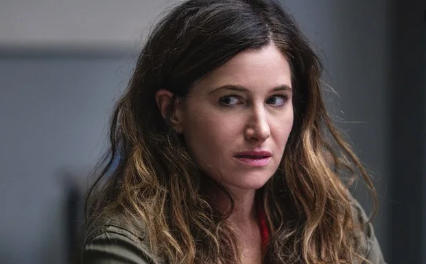 We’ve come to the conclusion of the premiere series of Mrs. Fletcher and while I could have speculated what number of things could go down, I wasn’t quite expecting an end like this. While no confirmation has currently been given for a season 2, I sincerely hope it gets picked up and we can continue with Eve on her sexual adventure! Kathryn Hahn has been stunning in the lead role and I hope there is more in store, but for now, here’s how the first season finished out! 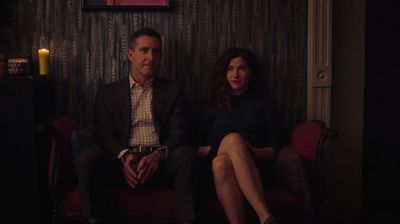 Eve is working on an essay for class, a turning point essay. We’ve all been there – a moment in your life where you had to pick a path that would forever change your life.  A moment you went through that made you who you are. And Eve is struggling with hers. She snags herself an invite to a party with Margo (Jen Richards) after Curtis (Ifadansi Rashad) gave her a lukewarm response. Well surprise to Margo, he does show up. Here’s a newsflash for everyone out there, when someone likes you, they show up. When I bought my first house, I bought a push mower. The old school kind, because I was nuts but I was also gonna be eco-friendly. Well, I got really behind on the lawn and this guy spent hours using this crappy rotary blade push mower to cut my lawn. We’re still together today and I knew there was something there because no guy was gonna do that if they didn’t like me. Well, Eve meets a guy at the party and tries to put on this bad B persona. It works for a little bit but ends up being not so fulfilling. Though after three years of no sex, maybe even disappointing sex is better than continuing that streak. Meanwhile, Brendan (Jackson White) is hitting it off with Chloe (Jasmine Cephas Jones) and they go to an underwear party. It is all about body love and positivity and they meet up with B’s roomie Zach (Cameron Boyce) and his boyfriend who is Chloe’s best friend.  But there’s still awkwardness and tension because Brendan’s not great at being chill. But maybe he’s trying. 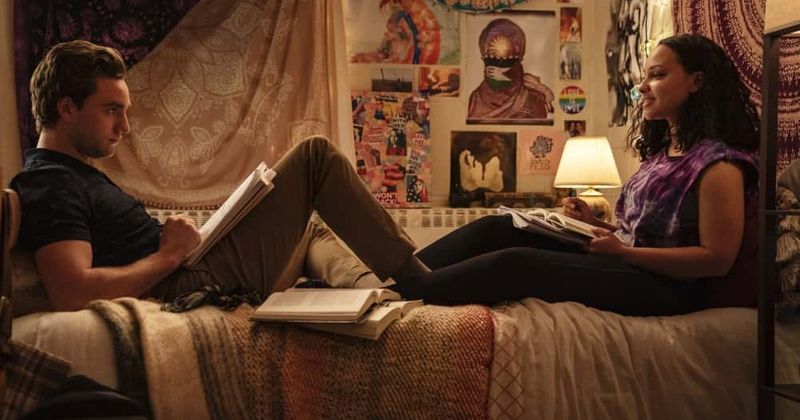 Eve is still tangled in her feelings towards Julian (Owen Teague) and unsure of what to do with them. She gets distracted by helping her friend Jane (Casey Wilson) after she finds out her husband cheated on her. Ouch. But he only got some tugs at a massage parlor, right? Well, still cheating but he wasn’t doing it emotionally, he was doing it because they weren’t having sex. He still loves his wife and wants to be with her, but their lack of sex is what’s killing the marriage. And Jane had mentioned the dry spell as well so clearly she’s not okay with it either, yet they aren’t figuring out how to make it work.  Well, luckily, they end up starting to work it all out.

Brendan is still hitting things off with Chloe and though he’s had some awkward initial moments, they are getting along great.  He even ends up studying with her but obviously not really studying. He’s liking aggressive pornography, Now, not all girls want to be called a dirty whore and choked out while giving you a blow job.  Because here’s the thing, the girls in porn are performing. The real woman is trying to pleasure the one she’s with  Some girls are into the name-calling, and that’s okay. But until you know if she is or isn’t, avoid calling her derogatory words while she’s at it. In this particular incident, he is lucky she only punched his balls. Others would have chomped right down. And Brendan does feel bad because he likes her and he genuinely didn’t mean to hurt her. But he did. And now he has to deal with the feelings of that.

Eve runs into her ex Ted (Josh Hamilton) who isn’t thrilled to find out his wife is expecting again making him a father of two…wait Ted, you’re missing one. You know, the one you went to go spend parents’ weekend with because it was a big deal???  Nice.

Eve decides to finally change her last name back to her maiden name and wants to throw a party to celebrate. She’s officially casting off the old name and returning to her former glory. She’s on top of the world until she thinks she sees Roy (Bill Raymond) which causes her to trip into the road, spraining her ankle and leaving her phone vulnerable to being run over by a car. Also not on the top of the world is Brendan who is behind really badly and failing. He also can’t get in touch with Chloe because she wants nothing to do with him.  So he’s not okay.  Another classmate sees how upset he is and drives him home for the weekend. Very sweet.  But what he finds when he arrives home is not what he expected. And I understand why everyone is embarrassed, but you’re also all adults who chose to consensually engage in that behavior together and while having someone walk-in is not ideal, it’s certainly not a complete downer on the evening’s events.

I hope we see more of Eve and her sexual exploration!  Kathryn Hahn has been such a joy to watch over these last few weeks.  I can’t imagine just leaving off here!  Give us more!!!

What do think of Mrs. Fletcher?