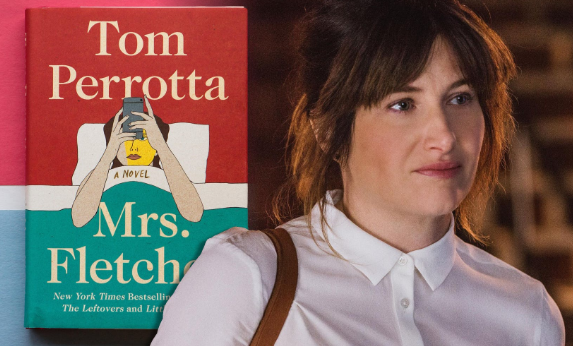 We stated once before but it is worth repeating what we know about MRS. FLETCHER which now includes a trailer that we will get to shortly.

Starring Kathryn Hahn in the title role, this comedy series is based on the bestselling novel of the same name by Tom Perrotta. The show is a dual coming-of-age story, exploring the impact of internet porn and social media on the lives of Eve Fletcher, an empty-nest mother, and her college freshman son. The cast also includes Jackson White, Owen Teague, Katie Kershaw, Domenick Lombardozzi, Cameron Boyce, Jen Richards and Casey Wilson. Created by Tom Perrotta; executive produced by Perrotta and Helen Estabrook; pilot directed by Nicole Holofcener from a script written by Perrotta. We are certainly glad that Perotta has a life at HBO after THE LEFTOVERS. We’ll soon get a strong sense of his comedic tone with this one as comedic moments were not a highlight in that previous series.

It also shows you the other half of the story which is what is going on with her son, Brendan Fletcher (Jackson White).  He “discovers that his new campus isn’t nearly as welcoming to his hard-partying lifestyle as he had imagined. Only a few weeks into his freshman year, Brendan is floundering in a college environment that challenges his white-dude privilege and shames him for his outmoded, chauvinistic ideas of sex.” He’s got some learning to do!

Here is that teaser:

This is one show that we can be sure that the adaptation will be pretty true as the writer & show-runner are one and the same. We will let you know when it gets a full trailer & a premiere date. It is coming yet in 2019.