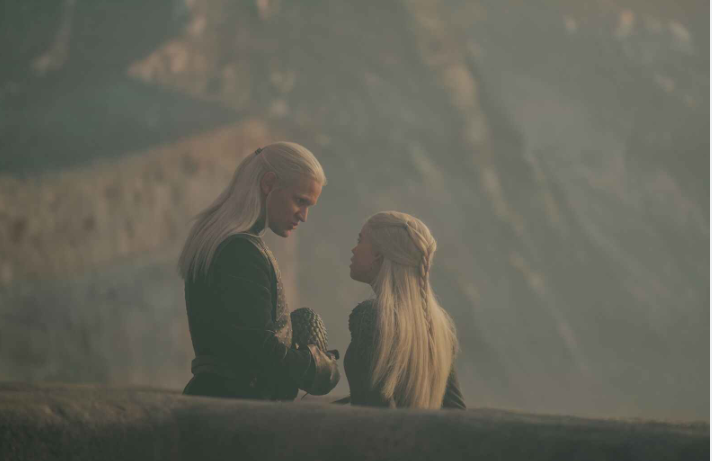 HOUSE OF THE DRAGON Episode 2, “The Rogue Prince” was helmed by Greg Yaitanes, whose credits are primarily associated with network television, a platform that often hampers an artist’s full potential. However, Yaitanes directed and won an Emmy Award for “House’s Head”, an atmospheric and gripping episode of HOUSE M.D.  The showrunners were justified in hiring Yaitanes. “The Rogue Prince” is a slow-burning episode, yet Yaitanes’s interpretation of the script produced some of the most startling images in this GAME OF THRONES series. Particularly, the close-up shots of crabs feeding in the open wounds of Lord Corlys’s sailors, and the mysterious Crab-Feeder are visually stunning and alarming.  But the most disturbing scene involved Lord Corlys and Rhaenys pressing King Viserys to marry their 12-year-old (yes you read that correctly) daughter.

This aforementioned plan for the King to marry a minor is extremely unsettling, which was punctuated when the preteen tells the King that she can rear him appropriate heirs to the throne.  W…T…F?  The intent is for the hierarchy to remain strong by uniting two royal bloodlines.  While dealing with the world’s most 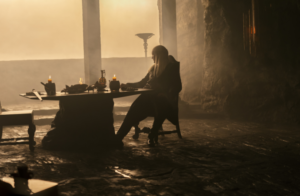 deadly and sickening game of dating, Viserys must deal with Daemon’s occupying of Dragonstone. Rhaneyra, the presumptive heir, wants to assist directly with the situation. Her father and his council admire her zeal, but deem the situation too dangerous. Rhaneyra is tasked to choose a knight to join the heralded White Cloak guards. Rhaneyra, chooses a guard and then disobeys her father’s orders and follows the King’s Hand Otto Hightower and a detachment of knights to Dragonstone. At Dragonstone, Daemon taunts his power by holding a stolen dragon egg and being guarded by his own knights and a full-grown dragon.  An understandably nervous Hightower orders his Knights to sheath their iron. While Daemon has the upper hand, a welcomed break in tension occurs when Daemon is hilariously reminded by one of the Knights (Ser Criston Cole selected by Rhaneyra) that Daemon was bested by him at the tournament. Nevertheless, everything seems dire for Hightower and company until Rhaneyra arrives on her own dragon. Daemon gives up the egg and has his armor-cladded entourage and dragon do an about-face and return to Dragonstone. Crisis averted, but the Daemon problem remains. 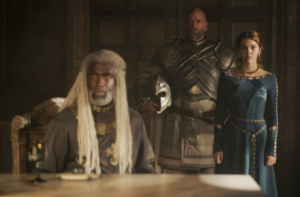 A scolding from King Viserys does not erase Rhaneyra’s diplomacy and bravery, yet the father and daughter have a deep discussion about his remarrying and the importance of the role of an heir. The intense moments between the King and council reach an apex when Viserys announces his intent to marry Otto Hightower’s daughter and Rhaneyra’s friend Alicent Hightower. This causes Lord Corlys to storm out of the Red Keep and angers Rhaneyra.; for Rhaneyra would no longer be the heir after Alicent bares a child. Not to mention, her bestie is now engaged to her father. Near the close of the episode, Corlys approaches Daemon to make an alliance. Daemon agrees but warns Corlys that he has the right to insult Viserys, but Corlys does not. These multilayered conflicts are what GAME OF THRONES enthusiasts and casual viewers loved about the original series.

Who the hell is this crab-feeding sailor dude? Is he on Daemon’s side, and if so, will he stop attacking Corly’s fleet?  Or is he an enemy of all, like the White Walkers in the original series? I have the FIRE AND BLOOD book, but the print is in Spanish (Fuego y Sangre’) and I am learning Spanish. Therefore, I will not learn the intent of this formidable and mysterious villain until the season unfolds.

Although servers crashed due to the high demand for the pilot episode, the 2.17 million viewership was impressive but not peak GAME OF THRONES viewership. However, five days after the series premiere, HBO renewed HOUSE OF THE DRAGON for a second season. With all of the purging ordered by Warner Bros. Discovery (including the axing of a near-completed $70m film), the quick renewal of HOUSE OF THE DRAGON is a testament to the conglomerate’s assessment of the series. HOUSE OF THE DRAGON returns on September 4, 2022, at 9PM ET on HBO. 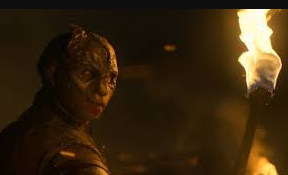