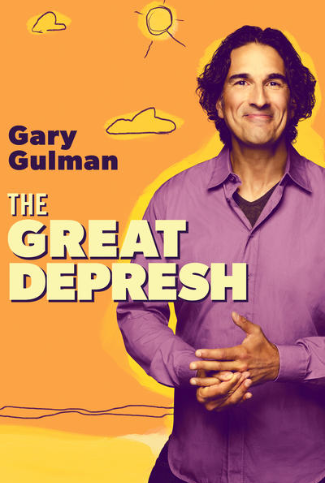 Gary Gulman has not offered the first comedic spin on mental issues on HBO but certainly added greatly to the concept with his comedy special THE GREAT DEPRESH. ‘Depresh’ is short for depression and he declares that it is in ‘remish’ (remission), which it must be to get up in front of many and pull off a standup routine and have it taped for HBO.

He has pulled it off quite well I thought. He started a while back, in fact, on HBO’s  DANE COOK: TOURGASM specials and has since mastered his setup, pacing and comedic timing flawlessly. It shows here quite cleverly. Just imagine it – he has a story of his life that includes depression, suicidal thoughts, bullying, medication electroconvulsive therapy, lethargy, psych wards and hopelessness and yet at the end of a set-up like that he pops with the punchline and the room explodes in laughter. He does it time & time again over his set. Silence hits the room and then a burst of laughter, as the audience sympathizes in Gary’s illness and then revels in him making himself the butt of a great joke.

The topic has been broached before, I cite the HBO Special CHRIS GETHARD: CAREER SUICIDE as example, but Gulman styles his piece a bit differently. Added to his special are film clips with his mother, his wife, his best friend and his therapist each, in turn, talking with Gary about his illness and his treatments. Developed in sync with an HBO initiative to highlight mental illness across its platforms Gary Gulman opens his anxiety-ridden life before us and is a good spokesman for the cause. He talks of over-crying, over-sleeping, and eating ice cream with a fork, loving his shock treatments and even taking small amounts of a horse tranquilizer.

Perhaps, this small, minor example of his delivery can illustrate how brave and how clever Gary Gulman is: