I enjoyed COASTAL ELITES but, I enjoyed it more the way I chose to watch it. Five performers each had a segment, a monologue, that deals with the character’s angst over what has been going down in 2020 to date. The satire tells contemporary stories of characters breaking down as they grapple with politics, culture, and the pandemic. The range of emotions are there but, as to be expected, some pieces were stronger than others. 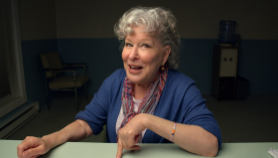 The piece, which was written for the stage I understand, was written by Paul Rudnick and was directed following pandemic protocol by Jay Roach. The characters in play are Miriam Nessler (Bette Midler); Mark Hesterman (Dan Levy); Callie Josephson (Issa Rae); Clarissa Montgomery (Sarah Paulson) and Sharynn Tarrows (Kaitlyn Dever).

Midler’s “Lock Her Up” is first. Without her even uttering her first word, I can say that I always enjoy the Divine Miss M.–always. Her Miriam is a loyal citizen of NYC, but the recent political situation has caused he to snap, finding her in police custody. We hear her side of the story and what drove her ro it as if talking to an officer. The performance is a treat from beginning to end, but the story, of all the things that happen and how she goes about telling it, even for a Jewish woman, screams theatricality not realism. But it was a fun moment and a great leading piece.

Levy’s “SuperGay” presents Mark, a Hollywood actor, in a video conference with his therapist. We learn if his stresses as a gay man in America while in lockdown. His gay role models 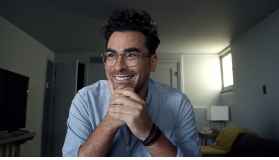 have been homosexual superheroes because that medium is the best example of his lifestyle he can cite. Well now he has the opportunity to playa openly gay superhero and even makes it as far as a callback audition. But will he sell himself to Hollywood’s version of gay? Will he sell his self and his lifestyle just to say that Hollywood is indeed inclusive? A gay at the crossroads of what is right for him and his culture. Totally a valid discission to be had. He returns the next day for another callback only this time Mark has heard Veep Pence’s stance on gay marriage. Levy gives a solid and believable piece here. 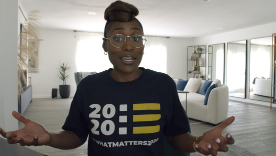 Rae’s ‘The Blonde Cloud” is next and Issa just is effervescent here. She sparkles from her eyes and smile. Sorry, I couldn’t help but notice. She gives us Callie, a successful rich girl who knew Ivanka Trump in boarding school. She accompanies her father who is invited to the White House and while there she links up with Ivanka. Callie is on a video chat with her BFF to tell her of her experience. It is an amusing scenario but we are to believe Callie and Ivanka have a heart-to-heart in the Lincoln Bedroom. Where it goes from there is this haunting presence Ivanka & her dad are in control of a Trainwreck and Callie is scared of what is to happen next. It doesn’t take the rest of us a sit-down with a Trump to fear what is coming next – it is going to be a ton of work for us all regardless. I thank Issa for that moment.

Paulson’s “Because I Have To Tell Someone” offers us YouTube personality Clarissa talking us through how to deal with all the agita that abounds because of a pandemic, civil unrest and heated politics. Hell, we should add natural disasters to that list as well! That what I thought we were getting but instead this is Clarissa’s chance to rant instead of calm down. She 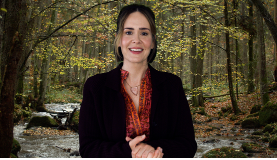 traveled home to Wisconsin to a family sporting MAGA hats and declarations of the pandemic being a hoax and on and on. It is a place that doesn’t worry about how to treat Blacks of transfolk because there aren’t any of them to be offended where they live. All is happy for the family but not Clarissa. She can’t stomach even her family over these matters. But, as her dad drops her off at the airport, he says he will not vote for the current president again because of the McCain insults, thus giving Clarissa some hope, I guess.

Dever’s “President Miriam” is the last piece; saving the best for last in my opinion. Her Sharynn is a young nurse from Wyoming who flies to 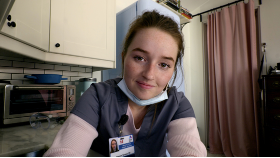 New York to volunteer at a hospital at the height of the area’s COVID-19 crisis. It is a simple story of the distress, danger and deaths that took off when the virus took hold. It encapsulated the dire work of health providers in the hot zone and, as is this special’s wont, it highlights the frustration of the political response or lack thereof regarding the medical emergency. Sharynn has seen it all and holds the current administration responsible for the slow response, the minimal aid and the loss of life. For me, the emotional impact of the medical story would have been enough. It was a touchstone to what was felt and dealt with as the virus bloomed in the U. S. for the first time.

I watched the special one segment at a time over two days and I’m glad I watched it that way. Why? Because as Clarissa said I am tired of thinking about everything. It exhausts me to hear people rant & rave over all the issues over & over, time and time again. I shut it off, I walk away and I shut down Had I watched all 80 minutes of COASTAL ELITES in one sitting, regardless of its performances and truths, I would have turned it off. All the characters here drew the line and played the Trump card and I get that but I’m tired of the yakking and just want action one way or the other.

I hear the rants all day, so HBO’s timing to give us more ranting, no matter how creative, wore thin.  COASTAL ELITES is worth the watch, of course, but be prepared to hear all too familiar words as you do.