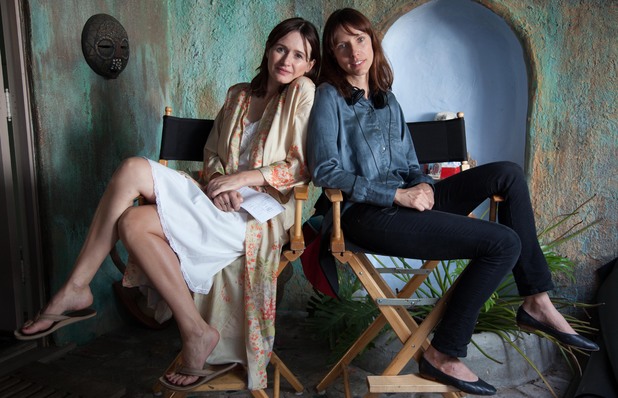 Doll and Em has always been a show about the relationship between Doll and Em and about the awkward nature of that relationship. At first, that awkwardness came from Doll working for Em and manifested itself in how they tried to maintain their employer/employee relationship while, at the same time, remaining friends. Now the plot of the show has progressed in such a way that the awkwardness doesn’t solely, or even mainly, depend on that aspect of their relationship. Instead, the awkwardness between them in now a result of the fact that Doll is being asked to screen test for a film role that Em had her heart set on.

Yes, Doll, the upstart, not-really-even-an-actor, right-place-right-time, bumbling hanger-on, has landed herself a screen test for a significant film role. A film role that Em has been stressing out over, dwelling upon, and coveting ever since the end of her current shoot was in sight.

And that is essentially all this episode is about.

In the first scene, we see Doll consoling Em, stroking her hair and building up her self-esteem. When Em worries that “this could be it” and that there might never be another film role for her, Doll listens and assures her that she’s wrong. When Em complains that she is “getting older” and isn’t “young and pretty anymore”, Doll assures her that she is still pretty, etcetera, etcetera.

This scene sets up the rest of the episode nicely, as it reminds us that there is probably going to be some awkwardness between them regarding the aforementioned film role they both read for and foreshadows the following scene.

In that following scene, we see Em getting make-up applied, make-up that will make her look old. And I mean old. We are told they are aiming for 63, but everyone agrees she looks much older. This, of course, just echoes Em’s self-doubt and makes her feel even more self-conscious than she already did.

Em films her final scene of the movie and then we find Doll and Em back at Em’s house. Doll is packing, getting ready to go to the airport and fly back home, to London. Doll breaks the news to Em that she got a screen test. Em seems, at least superficially, happy for Doll, but Doll decides that this would be a great time to unload on Em, telling her how hard and heart-breaking it was to work as her assistant. Doll says some harsh and hurtful things and, although she wasn’t necessarily factually incorrect, it was an odd and unprovoked semi-attack which took me a little by surprise. It just doesn’t seem to me like something Doll would do. Perhaps the show is trying to present to us that Doll has changed, that Hollywood has changed her somehow, for the worse, but if that is the intent, the build-up was not enough. This just seemed forced, surprising, and out of character.

Doll finally leaves, heading to the airport. Em sits down on the steps and cries. Just then, a car pulls up and Em’s husband and two kids emerge. They go inside and hug Em, who is happy to see them.

Obviously, the end of episode five leaves Doll and Em is a very awkward space. Their friendship, at this point, is clearly strained, the result of too much time together and too many competing ambitions. Although I think the episode moved too quickly (much of the Andy Garcia plot could have been cut out entirely), especially compared to the pacing of the earlier episodes, I did like where it ended. I especially like the fact this they left one more, final episode, so that we can see how Doll and Em deal with the aftermath. 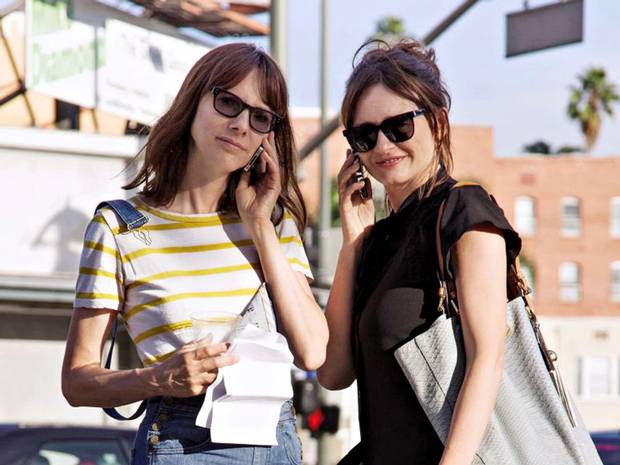 For episode six, there is no opening montage, showing Doll’s break-up and the beginnings of her reunion with Em. Instead, we see Em and her family in London, home for Christmas, poking around Em’s old neighborhood. Em wants to show her husband and kids all of the places she used to visit when she was a kid, growing up in that area, and, to that end, they stop at a restaurant where Em was taken often as a child. While there, they encounter Doll, who now works there.

Obviously, Doll never got the film role, the role that drove a wedge between Doll and Em and exacerbated their already turbulent relationship.

Doll and Em’s reunion is quite awkward. What is surprising is that Em seems intent on patching things up with Doll. She seems genuinely sad that they no longer talk, are no longer friends. It is Doll who isn’t interested in mending fences, holding a grudge against Em for her (real or perceived) wickedness.

At this point, I wished that the episode was going to be longer. I really wanted to see how Doll and Em would come around and become friends again. Or, if that were not to happen, I really wanted to see how Em would react to Doll’s reluctance to rekindle their friendship and to see how Em would react to that. I thought the whole topic was ripe for exploration and that there was lots of (potential) material here with which to work. In addition, it was quite nice to see Doll and Em existing outside of Hollywood. It was interesting to me that Doll was working in a restaurant. I wondered how she would behave in that role and if her Hollywood dreams had vanished, if she had simply repressed them, or if she had become bitter, resigned, and mournful regarding her missed opportunity. I felt as though there was enough there to warrant an hour-long episode, if not more.

Em becomes aware that Doll is performing in a play and decides to go and see her perform. Watching the play, and Doll’s performance, I think Em realizes that Doll wasn’t just playing at being an actor. I think Em begins to see that Doll is willing to work for it, to struggle in her craft, to not simply be a hanger-on or to bumble her way in to a role in a major Hollywood film. Em can see that Doll wants it and is willing to start at the bottom and work her way up to earn it.

After the play, Em hangs around and speaks to Doll. At first, the conversation does not go well, with Doll acting especially spiteful toward Em. As a matter of fact, I was taken aback at how spiteful Doll acted. I understand that she is meant to be holding a grudge, but her seething spitefulness seemed somewhat uncalled for. Em, reacting to Doll’s hurtful words, turns and walks away. But Doll calls out to her and Em comes back. She then presents Doll with a t-shirt she had custom made. On the shirt is the picture, seen in the opening credits of the show, of the two of them, very, very young, sharing a bath together, smiling.

This touches Doll and suddenly, she lets her guard down. She puts on the shirt and they  reflect on how much older they are now and, although it is unspoken, the fact that they are such old friends. They walk away and season one ends.

Overall, I liked this episode. I did, however, find the bit where Em meets her brother on the sidewalk very, very odd. And what was the point of it, exactly? To show that Em doesn’t have much of a family, or that her family life is unconventional? If so, it felt very forced and what Em did to appease her brother felt very surreal. Upon reflection, I suppose the scene was meant to show us that Em had no family besides her husband and kids, and, therefore, was eager to repair her relationship with the one person who was most like family to her. Even so, this sort of thing should have been mentioned earlier in the season, so as to make its inclusion here seem more natural and organic, not like something thrown in to illustrate one of the main themes of this particular episode.

I’m saddened that there are apparently no plans for Doll and Em to have a second season, as I think there is enough material here for at least six more episodes. The strength of the show was in showing Doll and Em struggling through their relationship and I believe that, given the ending of season one, there are still some rough and interesting roads ahead for the both of them.