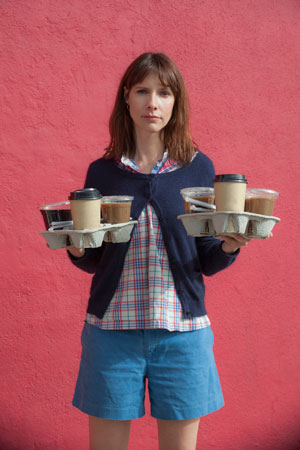 The first thing you need to understand about Doll and Em is that it is really a drama wrapped in the shroud of a comedy. I mean, sure, there are funny moments. But they are more of the awkward, absurd, or tragic sort. There is nothing slap stick or uproarious about the first episode. Instead, what we have is a relationship drama and many opportunities to snicker at the contradictory and selfish manner in which the main characters behave.

Episode one begins with an absolutely fantastic montage revealing how Doll’s life fell apart after separating from her husband. This opening scene features no dialog and is accompanied only by music. I found it utterly refreshing that the show didn’t get bogged down trying to painstakingly establish how Doll’s life turned for the worse. Many shows would have done just that, spending the entire first episode detailing the fall of Doll’s marriage and/or made the audience sit through endless expository dialog establishing the scenario. Instead, Doll and Em gives us less than 60 seconds of expertly done story-telling which perfectly establishes everything we need to know about Doll’s situation and allows us to plunge right in to the substance of the show, which is Doll and Em’s relationship with one another.

(I was happily reminded of Pixar’s film Up, which employed a similar tactic to quickly establish the characters in that film.)

The episode does not tell us how well Doll and Em have kept up with one another, if they are frequently in touch or if they only talk to each other sporadically, but I was left with the impression that they had not seen each other in a long while, owing mainly to the fact that Em travels frequently in her job as an popular and famous actor.

Once Doll arrives and is in Em’s company, we learn that Em has agreed to hire Doll as her assistant and we’re treated to a pretty amusing scene where Doll tries to pry from Em just what her job entails while Em simultaneously acts as though Doll doesn’t need to do much yet needs to do everything in a very exact manner. For example, Doll asks Em if she needs to get her coffee in the mornings, to which Em replies that she doesn’t. “But just in case” Em goes on to give Doll very explicit instructions on how she likes her coffee prepared, mildly frustrating Em in the process.

The following scene was the only scene in the episode that just didn’t work for me. In the scene, Doll is driving to pick Em up, gets stuck in traffic, and is unable to get in to the correct lane, passing Em multiple times before eventually getting it right. The scene is largely played for laughs and although it does contain an interesting bit of dialog, where Doll call Em “her driver”, the scene just seemed like a rehash of a National Lampoon joke.

The theme of the episode was that, even though Em is trying to help Doll through her tough time and generally means well, Doll is very much on the outside looking in. This is constantly, if subtly, shown in the episode (examples include Doll staying in Em’s trailer while she goes to act in a scene, Doll watching on as Em gets her hair and make-up done, and Doll getting literally locked out of Em’s house for 12 straight hours) and I expect it to be a theme throughout the season. 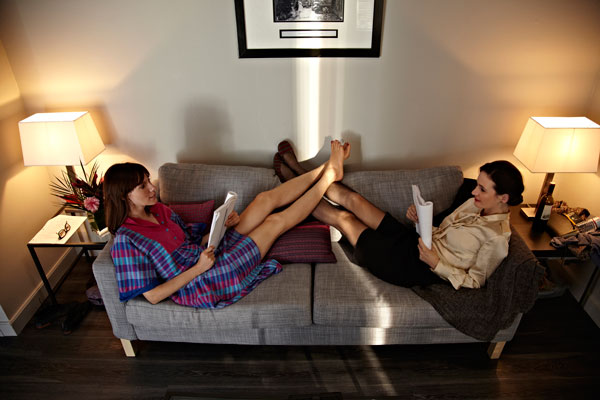 In addition, the episode establishes that Doll and Em’s relationship is going to be a bit strained as they both feel their ways through the parameters of their new employer/employee arrangement. It is my guess that this will be a huge theme for the season.

Overall, I really enjoyed the episode. The tone and pacing are spot-on for a dour, dramatic-comedy and the two main characters are very well established in this premiere episode. The direction is also very well done, with a camera style more similar to a film drama than a TV comedy, featuring lots of close-ups and scenes shot in the style of cinema verite. I was impressed by how often the show uses silence and features scenes where there is very little dialog (the opening scene previously mentioned and the scene where Doll is swimming in the pool before getting locked out of the house come to mind). This gives the show a more serious and mature tone, which I appreciated

It’s obvious why HBO picked up this show for its American broadcast (the show was originally shot for and aired by the British station Sky Living) as it has the look and feel of an HBO series. It will likely be of interest to those of us who enjoy(ed) Girls, Hello Ladies, Extras, and Enlightened. As a fan of all of those shows, I can highly recommend the first episode of Doll and Em.

Heading in to episode two of Doll and Em, I had high hopes. I really enjoyed the first episode, finding it to be maturely made and full of interesting themes and characters.

This expands further on the theme of Doll being on the outside of Em’s world, looking in with just a little bit of fermenting jealousy.

After Doll has a mishap with the boy, she convinces Em to leave the party. As Em goes to give her good-byes, Doll bumps in to Buddy, the man who is the host of the party and, presumedly, a high profile Hollywood personality. Buddy asks Doll and stay for a while and she agrees, leaving Em standing around, wondering where she went off to. Although it goes unsaid, in this way Doll is able to turn the tables on Em, enjoying the attention usually shown to Em and forcing Em to wait for her, rather than the other way around. This whole scene is wonderfully done and serves as a wonderful lead-in to the next scene, where Doll and Em are both talked in to joining Buddy in his hot tub. Stripping down to their underclothes, Doll and Em decide that if Doll says a certain codeword, then Em will leave, giving Doll and Buddy a chance to be intimate. However, when the codeword is given, Em doesn’t leave. She just can’t stand not being the center of attention. Realizing this, Doll leaves, obviously upset. As she is in the bathroom, changing, she sees that Em’s phone is ringing. It is Em’s husband calling. Doll steps out to look toward the hot tub and sees Em kissing Buddy. 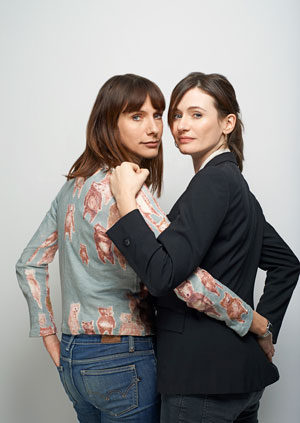 There is Doll, again, on the outside, looking in.

Just after, Em realizes her error and leaves the hot tub in a hurry.

This whole scene is done so well and played with such passive-aggressive perfection by Emily Mortimer (Em). It really highlights how, although she is trying to be a good friend to Doll, she just doesn’t seem to know how. Just as though she doesn’t seem to know how to be a good wife to her husband. It looks as though the show is establishing Em as pretty self-centered and egocentric. And it will be interesting to see if, by the final episode, Em grows at all as a character.

And this is, perhaps, the best moment of the episode.

Em comes out on the balcony with two cups of tea, one for her and one for Doll.

Suddenly, roles are reversed. Now it’s Em getting drinks for Doll, not the other way around. Is this how Em is trying to “make up” to Doll? Does she just feel guilty about trying to “steal” Buddy or is she sucking up to Doll, “buying” her silence and preventing her from reporting back to the husband?

I choose to believe that it is the later. She tells Doll that she “doesn’t know what came over her.” Doll looks at her and smiles, telling her not to worry about it.

Granted, this is mostly subtext and could be interpreted either way. But, at this point, I imagine Em is more worried about her marriage than her friend’s feelings.

This episode really built off of episode one very well, continuing to show us more of Doll and Em’s relationship as it morphs and changes. It’s a fluid thing, changing slightly from one day to the next, neither one of them quite comfortable just yet.

Many of the scenes were very restrained and quieter than they might have been had the director been going for more of a “comedy” approach, rather than a more dramatic one. Azazel Jacobs, the director of both this episode and the previous one, is showing a deft hand here, keeping every scene balanced and flowing while giving the actors a lot of space to really make their character seem real. Absent is the rapid fire dialog one might hear on Veep, instead replaced with slower, more though-out dialog that one might encounter in real life. Jacobs deserves a lot of credit here for the dignified tone and pace of this quite enjoyable episode.