Pretty big attention getting statement above, but the words were uttered by HBO President of Programming himself, Michael Lombardo, at the Television Critics Association event where all the HBO news has been pouring out of lately. We hang on plenty of hopes around here at times like the return of Larry David, ROME and a DEADWOOD movie.

That last hope has taken one step closer to reality with the words spoken from Lombardo:

“David has our commitment that we are going to do it. He pitched what he thought generally the storyline would be — and knowing David, that could change. But it’s going to happen. [David Milch] has something left unsaid. I’ve known him for a while and it feels like it’s something he’s not done talking about.”

It will be a bit of a wait sadly. The show ended on August 27, 2006 after three tough, dusty and foul-mouthed seasons. At that time, with the show abruptly ending with plenty of loose plot threads, we were promised concluding movies to wrap the story up; and we waited. In August of 2015 we were still latching on to a bit of hope like it was a frothy mug of beer and a warm whore straight from Deadwood itself.

But HBO has not given up on the story nor has its creator and main writer David Milch. Our source cites, however, that Milch is in the middle of another project at this time, though IMDb does not list anything current for him. It is not until that project is concluded that attention can be given to fleshing out a script for DEADWOOD. The impression is that it would be an HBO Films presentation as opposed to a limited series/limited series; that means it would only be two or three hours long. 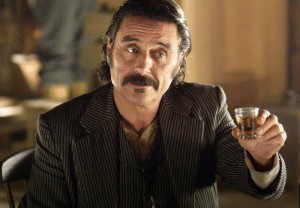 BUT WE’D TAKE IT! Then we would have to hope for Ian McShane, Timothy Olyphant, John Hawkes, Powers Boothe and company to reassemble for the project. It all seems like an incredibly difficult chance at this point, but we will continue to hope for DEADWOOD. It seems like it is one step closer to happening. HBO thinks so.