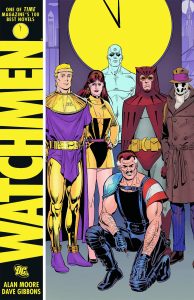 Damon Lindelof left us three seasons of THE LEFTOVERS and now needs another project for HBO and is now considering WATCHMAN. Yeah, we know, it excited a few of us around here too. But it is not a sure bet yet. We reported on the whole concept way back on 10.16.15. At that time Zach Snyder, the director of the 2009 movie adaptation of the comics, was on board. That clearly fell through. However, upon Lindelof’s conclusion of his latest acclaimed series, HBO offered him WATCHMEN. It is owned by Warner Bros., the parent company, so it was just sitting around to be picked up again anyway.

Lindelof jumped at the chance apparently and the internet jumped on the notion of it just as fast. But, it is way too early to get riled up about the Alan Moore/Dave Gibbons “superhero crime noir” story quite yet. This is a tricky project and Lindelof at this point is just entertaining the notion of taking it on as his next one. The deal hasn’t been made yet, let alone a talk of content or tone. It could lift the story directly from the comic pages or it could embellish with a backstory about the troupe known collectively as the WATCHMEN. Our source was able to connect an actual quote he made regarding the concept:  “From the flashbacks to the nonlinear storytelling to the deeply flawed heroes, these are all elements that I try to put into everything I write.”

Now, it could be a slow process to get this on HBO. We will certainly let you know when you can get really excited about it because we will once again keep a close eye on its development. It could start as soon as HBO officially confirms it is going ahead with Lindelof’s take on Dr. Manhattan and the gang. We’ll keep you informed.