Here we go again. As you recall about five different plot ideas surfaced for a potential continuation in the GAME OF THRONES milieu. One of them moved forward with concept creator George R. R. Martin and Jane Goldman, unofficially titled BLOODMOON. Well, another concept is in the works now as R. R. Martin and producer Ryan Condal have been granted a pilot order for a tale of the House Targaryen. 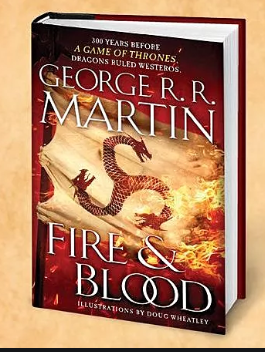 The work is said to be set 300 years before the events in GAME OF THRONES and tracks the beginning of the end for House Targaryen. The concept is not a fresh new creation as the reports indicate that the plotline will come from R. R. Martin’s novel “Fire & Blood.” Named after House Targaryen’s words, “Fire & Blood’s” first volume was published last November with the tagline, “300 Years Before a Game of Thrones, Dragons Ruled Westeros.” The Targaryen history book, a companion to Martin’s “A Song of Ice and Fire” saga, goes back to a time when House Targaryen — the only family of dragonlords to survive the Doom of Valyria — took up residence on Dragonstone. It starts off with Aegon the Conqueror, creator of the Iron Throne, and goes on to recount the generations of Targaryens who fought to hold the throne, all the way up to the civil war, known as the Dance of the Dragons, that nearly tore their dynasty apart. Supposedly that war will be a significant part of the TV adaptation, penned by Condal.

With the devotion to finding the right piece(s) to add to HBO’s schedule from this franchise, however, (as you could well imagine) there is a sense of caution. Bob Greenblatt, chairman of WarnerMedia Entertainment and Direct-to-Consumer, addressed the possibility of putting multiple GoT-themed shows on the air in light of the original series’ enormous global success. “It’s a double-edged sword. We’re having conversations about how do we smartly continue the Game of Thrones universe, but we have to be really thoughtful about not killing the golden goose and not putting on shows that aren’t up to that quality level, and how many is too many.”

Casey Bloys, HBO Programming President, echoed his sentiment. “I think Game of Thrones is a fantastic property but I don’t want to just be the home of prequels and sequels and all that stuff. I think you want to be really careful about how you do it.”

And so with the new concept on the table for a pilot and BLOODMOON’s pilot in post-production we await to see if either of them will make the cut and get a green light to series. What do you think?