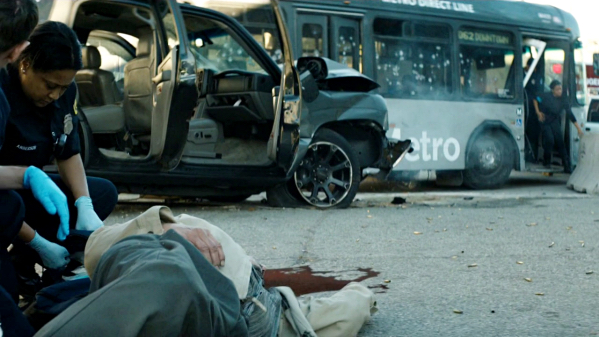 After last week’s explosive episode, True Detective finally felt like it had hit the ground running—particularly after having spent half the season on character development and veiled clues. Ray, Ani, and Paul finally had a breakthrough in the investigation, leading to the pulse-pounding raid and shootout with Ledo Amarilla and his men. However, the dust didn’t settle quite as expected. Rather than picking up where it left off, “Other Lives” continues exactly 66 days after what has now been deemed “The Vinci Massacre.” Caspere’s murder case has been officially closed since the man believed to be responsible, Amarilla, is now dead. Of course, no one truly believes he was the one responsible, making him the season two equivalent of Reggie Ledoux—though instead of spewing Nietzchean philosophy, he shouted angrily in Spanish before shooting a hostage.

Quite a bit has changed in the two-month period between the Vinci Massacre and where “Other Lives” picks up, so much so that it feels as if though True Detective has hit a reset button. Even a part of the lyrics in the opening credits have changed, perhaps symbolizing a new beginning for the series. Ray has quit Vinci PD, shaved his mustache, and is now working “security,” which really means working as one of Frank’s henchmen. The custody hearing with his son is reaching its peak as the judge orders supervised visitations, a toxicology test, and a paternity test to determine whether Ray is the biological father. Despite his two-month sobriety streak (except for alcohol, of course), things aren’t particularly looking up for Ray, especially after his attorney tells him “this is gonna get expensive.” This leads him to Frank, asking for additional work for cash. Frank has a feeling Blake is working behind his back and asks Ray to tail him, and during a late-night excursion, Ray sees Blake meeting with Dr. Pitlor and Osip as they look over (and somewhat molest) a group of prostitutes. 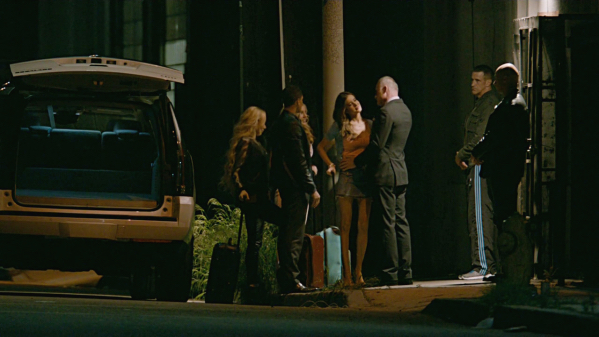 Life is bleak on Ani’s end as well. She’s been demoted to the evidence room and is attending her required sexual harassment meetings, making it through them by screwing with her therapist and the attendees with gems like, “I just really like big dicks” and “I really want to have trouble handcuffing the thing.” Most riveting, however, is the new information she discovers pertaining to the investigation when she meets with the woman whose sister is missing, last seen in the season premiere. She gives Ani several photos and a party invitation left in an envelope at her P.O. box, in which Ani discovers discreetly taken photos at a party with Senator Fred Jenkins, Caspere, and presumably other men of influence, along with photos of the blue diamonds that were in Caspere’s safe-deposit box. This marks another clear connection between the escort parties and powerful men, which Ani points out to Ray when they later meet up at the Black Rose to discuss the photos. She’s convinced they didn’t clear the Caspere case and everything is being brushed under the rug—the missing girl, the poisoned interior, the shootout. Ray, however, no longer seems invested. Perhaps he’s become jaded working for Frank, and his preoccupation with his son’s custody isn’t helping. “Because my powers of influence are so meager in this sublunar world of ours, I try to limit the people I can disappoint,” he tells her. Say what you will about this season of True Detective, but its dialog is still as nihilistically poetic as ever. 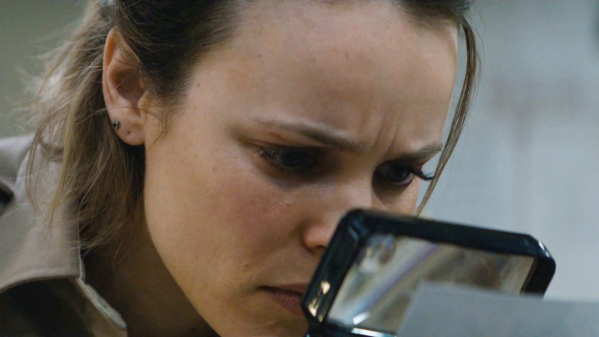 Last but not least, we have Paul still dealing with the faux scandal caused by the Hollywood starlet who pressed charges for harassment. He’s been demoted to working insurance fraud now and is no longer in the field. It appears as though the shootout in Vinci cursed our three detectives. Paul also has to deal with his drunken mother who not only stole twenty thousand dollars from him but also teases him about his closeted homosexuality. Not even his four-month pregnant wife seems to bring any joy to his life, proven by the fact that he has to spike his iced tea with two small bottles of whiskey before sitting down for dinner with her and her mother. 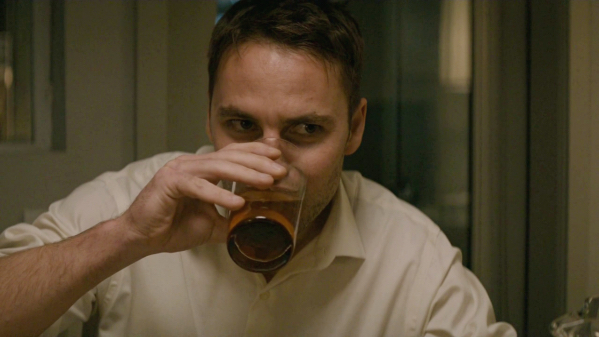 Just when True Detective seems to reach its bleakest moment of the season, the three meet with Katherine Davis who is convinced collusion is taking place in Vinci and the state institutions. It doesn’t hurt that she’s also looking to take the Attorney General seat for herself. Davis decides to put together a “confidential special investigation” with Ray, Ani, and Paul, in hopes of finding the girl who led them all to the meth lab, and ultimately, finding Caspere’s real murderer. Ani and Paul are quick to be convinced—with Ani’s concern for the missing girl and Paul’s itch to be back in the field—but Ray isn’t immediately on board. That is, not until Davis mentions how helping her with the case would allow her to intercede with Family Services to make sure things go his way with his son’s custody. And just like that, the trio is back at it. 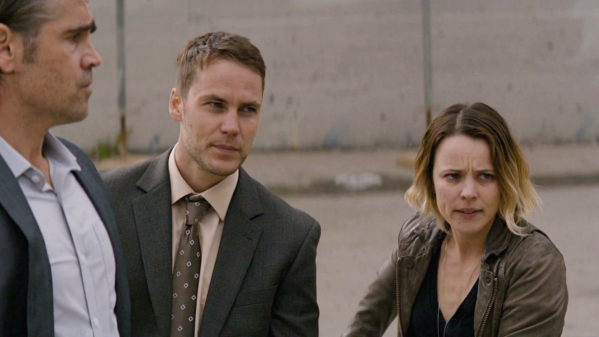 Though quite lackluster and perhaps a bit overly convoluted, this episode of True Detective laid a lot of groundwork for the sinister mysteries to be unfolded in the final three episodes. Ray pays Dr. Pitlor a visit (a several blows to his facelift) to gain information about the parties and the escort ring, revealing the first big break of information in the series. We discover Chessani’s son, Tony, was the one who concocted the idea of these parties with Caspere, which Tony used to befriend men of affluence for political gain while also compiling blackmail material on said guests. This not only leads back to the photographs but to the hard drive Ray found before he was gunned down by the masked Birdman. In the same vein of symbolism, Ani and Paul head to the last known location of the missing girl, where they follow a group of carrion birds circling a location. Not only do they find the location in which the sex parties took place, made evident by the identical chandelier from the photo, but they also find a shack in which someone was violently strapped to a chair and killed—presumably Caspere. The pieces of the puzzle finally seem to be coming together, though they are still far too few to make any sense of. It has become clear that these parties were used for blackmail and someone discovered this, therefore stealing the hard drive and murdering Caspere. Yet the question remains: Who, and how extensive to does this conspiracy really go?

Perhaps the most mundane aspect of “Other Lives” was Frank and his weariness settling into suburban life. He still wants his fortune back and is attempting to scavenge cash through whatever means possible, leading him to McCandless at the Catalyst Group, where McCandless asks him to find a certain hard drive Caspere had containing “home movies.” It seems everyone is out to find that hard drive now. This aside, Frank’s character development has consisted of the same-old as it has in previous episodes: he wants his fortune back, his wife probably can’t conceive, and he’s still checking the ceiling for water damage. We do, however, end the episode on a high note as he’s paid a visit by a fuming Ray, who has discovered the man Frank told him raped his wife years back was a lie he used to have someone in the force under his finger. “You and me need to talk,” Ray growls at him, and the screen cuts to black. This could signal the severing of ties between Ray and Frank, which definitely wouldn’t work in Frank’s favor now that he’s also looking for the hard drive. How exactly Frank is going to play off having an innocent man murdered to have Ray cover up his dirty work should also be interesting, considering Ray’s short fuse. 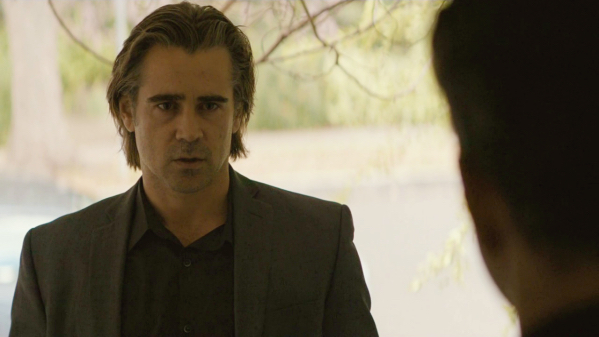 True Detective seems to finally be getting its bearings, though it’s taken the series quite a while to get to this point. “Other Lives” has undeniably set a solid foundation for the remainder of the series, with the clues uncovering ever so slowly as they lead to the big revelation. Despite this season’s slow-burn approach, True Detective is doing precisely what it did in season one—a complex character study. This series is much more than some typical crime drama. It has always had a strong investment in its characters and the metaphorical meaning behind the situations they are put in. In season one, we had Rust, the atheistic nihilist, and Marty, the spiritual yet troubled voice of reason. Their case dealing with the occult heavily coincided with their views and approaches, making for an unrelentingly dark and extraordinary season. Season two holds various similarities in this respect, such as dealing with sexually deviant behavior of men in power. Ray, Ani, and Paul are also troubled by their own personal demons. Ray straddles the line between corruption and justice. Ani is plagued by her familial issues and emotional detachment. Paul refuses to accept his homosexuality and is troubled by the unmentioned events of the war. Every character in the series and their subplots are precisely what True Detective has consisted of from the start—creating people with real issues that must learn to face themselves while also facing the corruption of the outside world. In this respect, True Detective has succeeded as a series unlike any other, though it takes quite a bit of investment and patience on the part of the viewer. Nevertheless, for those still sticking with season two, this episode is a clear indication that it has all been worthwhile and the best is yet to come.

Here’s a preview for next week’s episode, “Church in Ruins,” along with an exclusive interview with Taylor Kitsch: