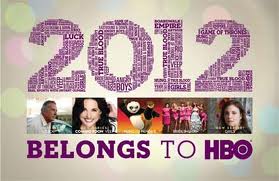 As I mentioned just a couple of posts ago in WHAT’S ON: HBO SCHEDULE FOR DECEMBER I always look forward to the special promotional footage at the end of the year. HBO just aired on Sunday night 2012’s yearender piece and it was sweet. It clearly highlights quite a few of the key moments of the rapidly closing year.

It also, as it always does, offers a sneak peek of what is “Coming in 2013.” You can see it all for yourself but it does give us glimpses of new series VICE, HELLO LADIES and  FAMILY TREE;  the HBO FILMS presentations of BEHIND THE CANDELABRA,  MARY & MARTHA and PHIL SPECTOR plus the Miniseries Event PARADE’S END as well as comedy and documentaries in the wings; all of which HBOWatch has been following since their early development.

There are also promises, of course, of more GAME OF THRONES, BOARDWALK EMPIRE, TRUE BLOOD, THE NEWROOM, GIRLS, VEEP, ENLIGHTENED, REAL TIME WITH BILL MAHER, TREME and EASTBOUND AND DOWN.   See it for yourself –

Please note loyal Watchers – Some of this footage is the first images seen from a few of the works. It is hard not to notice, for example, the flashy shots from the Liberace pic BEHIND THE CANDELABRA. Did you recognize Michael Douglas and Matt Damon?

Also glimpsed were frames of the highly anticipated PARADE’S END….note that we are still holding up our prediction that it will air in February ’13.

Lastly,  the posts on this site reflect our love and appreciation for the 2012 shows that will be returning in 2013.  We relish what we have watched and look forward to the New Year.  Couple this with the brand new Game of Thrones season 3 trailer and a slew of other shows on the docket and we hope you join us here at HBOWatch in 2013!