The Gemstone children turn into detectives in this week’s episode as they all point their fingers towards their father for having a hand in the murder of Thaniel (Jason Shwartzman). Having arrived on the scene covered in blood, Eli certainly looks guilty but would the head of the Gemstone family really put his reputation on the line to settle a feud with a reporter? One would suppose that depends entirely on what the report had found out. 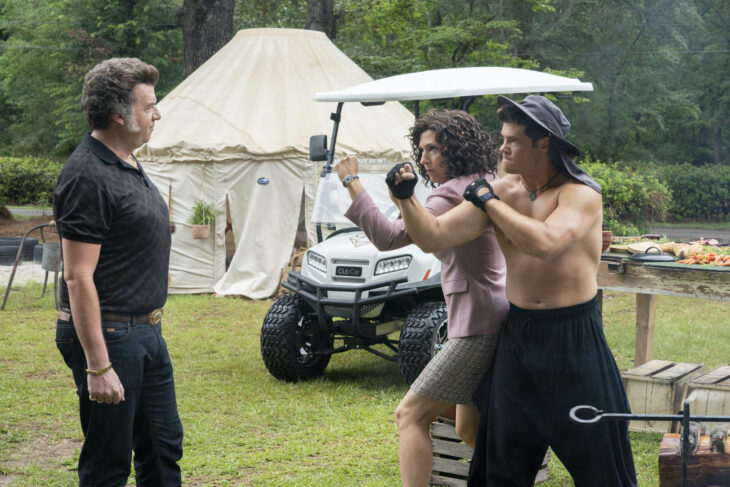 There is any number of suspects into who is behind the slayings, as let’s not forget, Thaniel’s body was not the only one on the lot. While Eli’s embarrassing alibi only serves to piss off his children even more, he would appear to be in the clear which leaves suspect number one as wild card Junior (Eric Roberts), a friend of Eli’s from his younger years. Eli, who is choosing to distance himself more and more from Junior, is potentially putting himself at risk but something tells me that he can handle himself if he needs to. 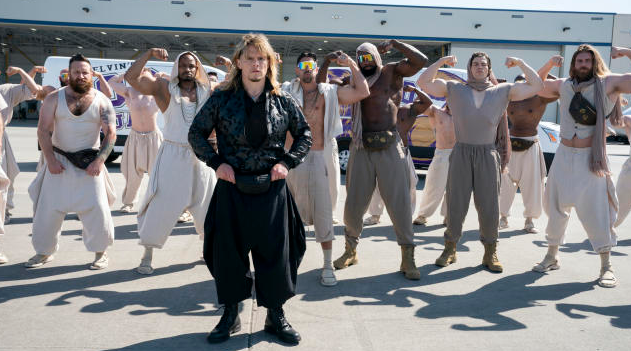 Meanwhile, Kelvin (Adam DeVine) has his own stuff to deal with in the rising testosterone levels amongst his overtly homoerotic cult of super hunks – The God Squad. Kelvin and Keefe (Tony Cavalero) have their hands full with one rebellious member, Titus, who is questioning Kelvin’s leadership which leads to a primitive display of strength when Titus is ordered to prove himself by dragging a large concrete cross along the ground but is sadly foiled by his own pesky hamstring. It really isn’t clear yet what the purpose of the God Squad is apart from going into schools and youth clubs to show off to young children. Kelvin is desperate to prove himself as much of a man as Jesse, so employing a dozen muscle men to help spread the Word of the Lord seems to be as far as his efforts go. However, when a stunt backfires and the family ends up getting sued, Kelvin may have to grow up quicker than he wants to.

While this episode was not particularly memorable, it served a purpose in setting itself apart from the first season, one that is driven heavily by the plot as each member of the family has their own thing going on. Even Gideon (Skyler Gisondo) and Amber (Cassidy Freeman) have their own storylines this time which is more than welcome to help tame the melodramatic Jesse and Judy and attempt to keep them in line. There is absolutely no telling how far Judy Gemstone can go, she is like a firework that’s yet to go off. While she flips between being a respectable member of the family and a petulant child, she is also wildly unpredictable which easily makes her character the most fun to watch. You cannot help but watch her crash and burn as she inevitably will, likely taking her lap dog BJ (Tim Baltz) down with her.

Eli may not be capable of murder but he knows someone who is. How far is he willing to go to protect himself and his family? And what exactly is he protecting them from?