With the way THE NIGHT OF ended its run back on 08.28 it appeared as there could be more story to tell. As of this posting it has almost been a month and there has been no official word on whether there is a Season Two. Think of the possibilities. At the very least, perhaps Nasir Khan (Riz Ahmed) would always be haunted by the ordeal that one night in October and the aftermath of it all. The Khan family could also see lasting effects and you could wonder what was ahead for John Stone (John Tuturro). There is also the possibility of Helen Weiss (Jeannie Berlin) and Dennis Box going after who they believe is the real killer (Ray Halle played by Paulo Costanzo) in the case. Plus, there is the question of whether Naz still did kill Andrea Cornish (Sofia Black D’Elia) during that blank time frame that he doesn’t recall.

Since the story is about the criminal justice process it would be plausible to still solve the Cornish murder. That criminal case is still unresolved for us, though it is awful scary to tamper with the story. If parallels can be drawn here THE NIGHT OF production is like TRUE DETECTIVE. Both Pizzolatto and Zaillian had years to craft and shape each of the first seasons of their shows. Also like TRUE DETECTIVE if THE NIGHT OF rushes into a second season to ride on the acclaim of the first one then story and detail could suffer thus, tainting the whole thing. As much as we might want resolution to the story and justice for the victim we don’t want a less stellar sophomore season whipped up in a short span of time.

At least as far as Naz’s story is concerned I think we have to be satisfied with what we saw play out in those eight episodes. Riz Ahmed thinks so as well. He told Hollywood Reporter last month via a Q &A the following:

Hollywood Reporter: Given that Naz presumably was less than conscious even if he did commit the crime, was it ever important for you to know for sure from Steve [Zaillian] and Richard [Price]?

Riz Ahmed: Steve and Richard, particularly Steve is someone who really likes to let the writing speak for itself. He’s not someone to come and sit down and tell you everything the scene represents. In my mind, it’s quite conclusive about who did it. I just find it interesting that for many people it isn’t. Regardless of who killed Andrea or not, you see that Naz becomes an accessory to murder in prison by the end of [the season]. Certainly he leaves with blood on his hands, one way or another.

HR: Given the state of isolation and addiction in which we left Naz at the end of the finale, does that feel like where his arc was designed to go or do you want a second season, personally, for following Naz further?

RA: I think it was conceived of as a one-season one-off, and perhaps there’s a second season they might do a different case like they did in the British version of the show. I think sometimes it’s said, “Better to quit while you’re ahead.” 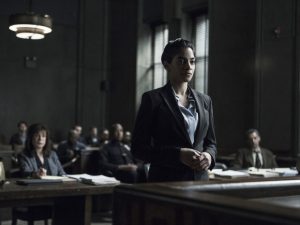 Another person heard from was Amara Karan who played Chandra Kapoor. Her character as Nasir’s defending attorney definitely has some thoughts on a Season Two and her character. If you recall Chandra made some major blunders of her own! Here is what she told Variety:

Variety: Why did she kiss Naz?

Amara Karan: I don’t want to interpret too much. I want to let the audience bring on their own interpretation. One of the strengths of the piece is there’s a certain level of ambiguity all throughout for all the different characters. Not every action is explained, which allows the audience to own the story and take ownership of it. I think she is at the edge of her own confidence and her own insecurity. I think what eventually happens to her is a tragedy and a shame. She makes the choices. She is too involved to be the best lawyer that she could be. And it’s a portrayal of that idea.

V: What do you think the future would hold for her?

AK: You’re going to have to tune into “The Night Of” Season 2! You could invent so many wonderful stories. Why not? She could open her own law firm and start her career all over again.

AK: Oh yes! Absolutely if there’s a great story and a great part, absolutely, as there was in the first season. I really loved making the show. I learned a lot. I loved working with John Turturro and Riz and Steven Zaillian. It was a dream come true. If a good story came up, I’d grab it.

V: But is it really happening?

Though a continuation of Season One’s story is not likely, THE NIGHT OF could easily turn into an anthology for Zallian and Price. They pick another night on which an unsolved crime is committed and follow the criminal process on a distinctly different path from what was seen in Season One. It could cross paths with John Stone or not, but just like NBC’s Law and Order and the like there are many stories that could be told for us and HBO. Lastly, though I think it wise for Zaillian not to have rushed into a commitment for a second season right away based on the acclaim, I do wish we would have heard by now on whether THE NIGHT OF has another story to tell. 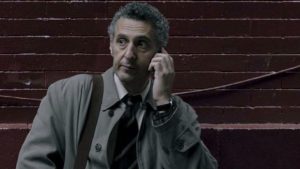 What do you think? Should the story end or should Andrea Cornish’s murder at least be resolved? Should they continue with the lives of Season One’s characters or move on to a different crime story? Would another limited run of THE NIGHT OF without John Stone be right? We await an answer.