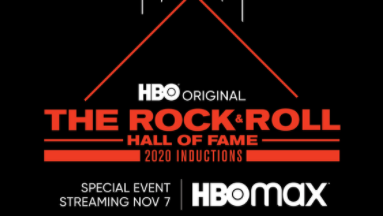 HBO is shaping up details for what is coming in November 2020. One piece of programming is the ROCK AND ROLL HALL OF FAME 2020 INDUCTIONS. It has certainly been altered from its normal presentation due to pandemic protocols and is airing months later than normal as well. Here are a few details, via a press release, of what this year’s presentation will be like.

THE ROCK & ROLL HALL OF FAME 2020 INDUCTIONS debuts SATURDAY, NOVEMBER 7 (8:00pm ET/PT) on HBO and to stream on HBO Max. The special presentation will honor this year’s inductees: Depeche Mode, The Doobie Brothers, Whitney Houston, Nine Inch Nails, The Notorious B.I.G., T-Rex, and Ahmet Ertegun Award honorees Jon Landau and Irving Azoff. This special event is in lieu of the live Induction Ceremony originally scheduled for May 2 of this year. 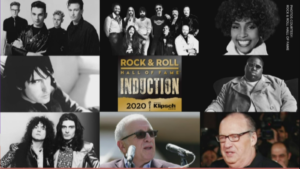 Dave Grohl kicks off the show with a heartfelt introduction to this year’s class of inductees, and the special guests will speak further on how the 2020 inductees impacted their personal and professional careers.

“We’re honored to come together with this distinguished group of musicians and artists to celebrate our 2020 class of inductees,” said Joel Peresman, President and CEO of the Rock & Roll Hall of Fame Foundation. “While this year’s program will be different than those of years past, we look forward to recognizing their impact on the industry, their fans and the next generation of artists.” THE ROCK & ROLL HALL OF FAME 2020 INDUCTIONS is executive produced by Joel Gallen, John Sykes, and Joel Peresman; directed by Joel Gallen.

Clearly, a big assemblage of honorees, fans and bands will not be gathered like in years past. The event must feature pre-recorded tributes from celebrity guests & video montages of the musical accomplishments of the chosen. Since a couple of the inductees are being honored posthumously the video montages would happen regardless, but will the surviving Doobie Brothers, for example, be able to play a pre-recorded number of two from a safe studio somewhere? Those type of details are not provided here, but it would be nice. At least, those accepting the honor should have acceptance speeches, right?

We’ll soon know how it all plays out come November 7 on HBO.